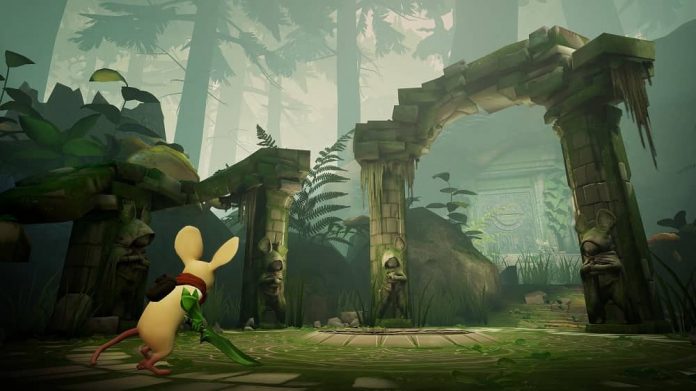 To put it bluntly, Moss is the pinnacle of PSVR and a crowning achievement across VR as a whole.

Every once in a while, there comes a game that truly leaves a mark. Something that transcends entertainment and instead becomes an experience; a journey in which you aren’t just an observer, but a participant. Moss is one of those games.

The adventure on which you accompany Quill, the brave mouse protagonist, is simply magnificent. Her quest through this enchanted fairytale world is filled with so much charm and wonder to the point that it can often be disarming. From towering forests to elegant castles, the scope and feel of Moss is breathtaking. Each and every step Quill takes as you watch over her as the ‘Reader’ is a memorable moment of awe and inspiration. Developer Polyarc did more than give you a game to play; it gave you characters to remember, a realm to discover, and a connection to the purest of stories that is sure to last. 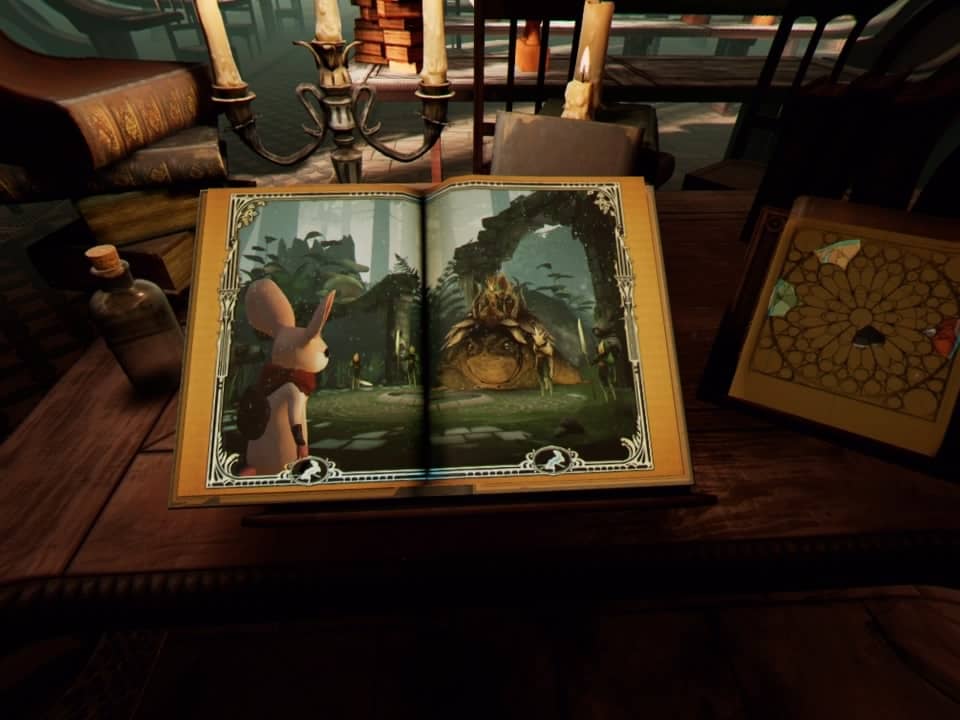 Quill, while out adventuring, comes across an ancient Glass Relic which awakens mysterious powers. She is then greeted, and guided, by you, the ‘Reader’. Her quest becomes realised when a new friend informs her of her uncle’s peril, and she sets out to save him, no matter the cost.

The environments that make up Moss are stunning. Little towns come to life, as the inhabitants go about their lives. Forests take on massive scale as the little Quill ventures through this gigantic world. Wildlife looms; the smallest gap like a sprawling cavern. By putting you so close to Quill, the world around her feels enormous. It adds to the character of Quill, and the overall charm and appeal of Moss, as even the smallest of obstacles becomes a challenge for her to overcome. Nothing is given here, and watching over Quill and helping her through her troubles brings you that much closer to her.

I absolutely love how Moss makes you feel like you’re both an active participant and an omnipresent onlooker. Sometimes you’re flipping through a book in the library, getting the story told to you by the wonderfully voiced narrator. Other times, you’re helping Quill by moving obstacles, healing her, or controlling enemies. Something magical happened about halfway through the game, where it starts to seem like Quill is moving on her own, almost as if I forgot I was controlling her. That sense of immersion, like I was truly just a figure, a guardian angel watching over her, only helping where I was needed. Watching Quill as she uses sign language to give you puzzle/battle strategies, gives you high fives, or happily dances after a victorious battle adds to the unbelievable feeling Moss gives you. Quill knows you’re there, and she shows it, and it is lovely. 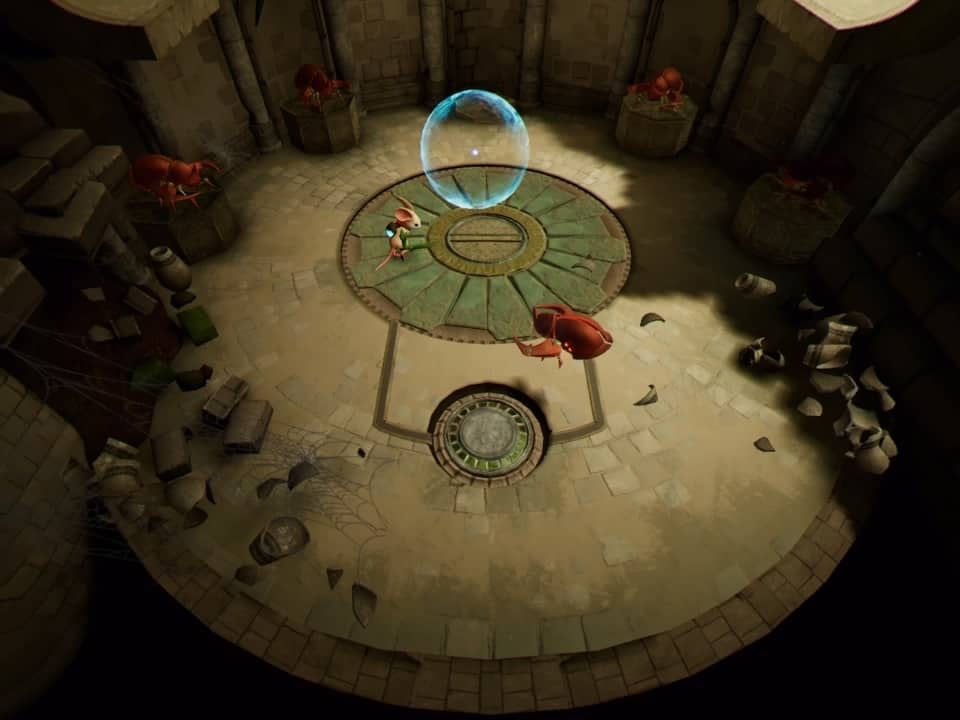 One of the most surprisingly great aspects of Moss is the controls. From platforming, to the motion controls, everything just works. Even the combat, which can get fairly hectic later on, is so smooth and tight. Quill has nothing but a sword and a jumping/dodging ability, but the fighting never suffers for that. She’s agile and ferocious, and her little squeaks of bravery, struggle and pain are noticeable and powerful. Enemies vary from melee-focused to ranged attacks and exploders. You, as the Reader, can possess and control enemies with your controller and motion sensor. This is particularly helpful in later puzzle sections. The boss section at the end of the game against the venerable dragon (mentioned heavily in the lore early on), is stunning. It’s perfectly paced and orchestrated for the VR experience — and has one heck of an unforgettable ending. It honestly doesn’t matter which angle you look at Moss from, it shines from every corner.

The puzzles you encounter throughout Moss range from “Hey, no problem” to “Wow, that was really cool and clever!”, to “Wait… but… didn’t I…? Ohh… ohhhh, I got it!” Definitely present are some Zelda inspirations, as a few puzzles had me thinking back to my times with Link. I love that the game doesn’t ever push anything on you too much, though. You aren’t just doing puzzles for five straight areas, or fighting enemies for 20 minutes straight. Sometimes you’re just watching Quill as she runs along a river bank or climbs some ledges in a miniature broken-down fort. The passive moments of Moss, where you get to look around and really lose yourself, aren’t incredibly numerous, but the ones that are there are unmistakably gorgeous. Given the short duration of the game, it’s nice to see that not a second is wasted. Every inch is worthwhile. 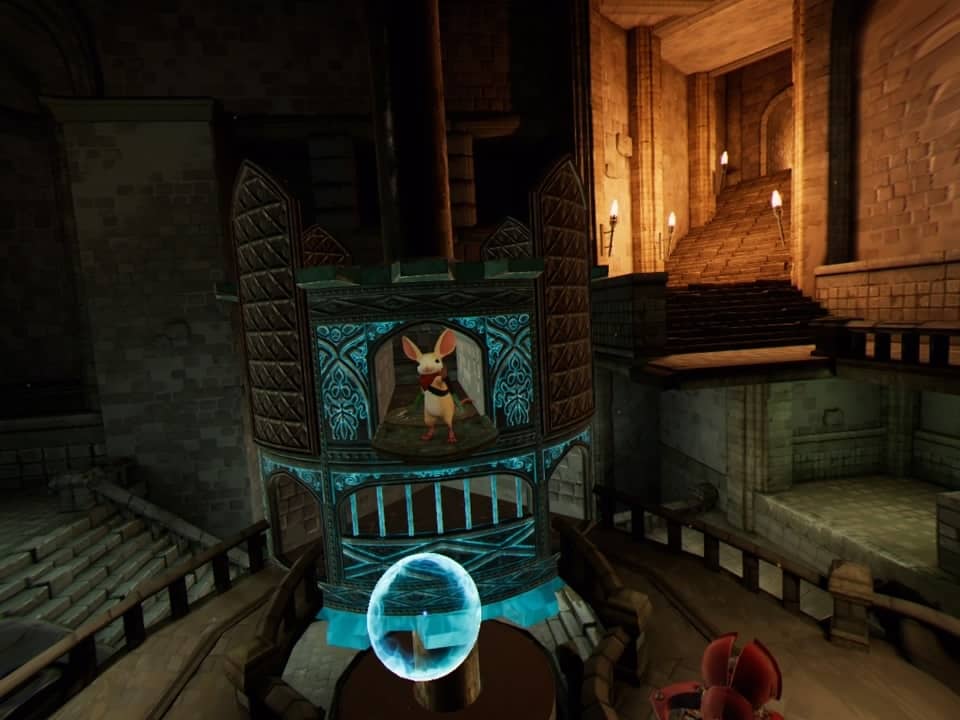 On a purely aesthetic note, Moss is superb. Without a doubt, this is the prettiest game I’ve encountered on PSVR. The colours are striking, the characters are lively, and the music is phenomenal. The score that follows Quill through her adventure is pieced together perfectly, with melodic, fantasy themed strains that hum as the story is told to you, to the bombastic, energetic tunes that rumble behind you as you battle enemies. Several times I simply stopped to look around and take in the rich detail and love that went into Moss. I wish I had more time in this game, and that, honestly, is my only complaint. Around three hours is plenty for most VR games, and the notion that Moss is too short isn’t warranted, but it left me wanting more. After the credits though, we are told that this is just the beginning of our journey with Quill.

I can’t state enough how utterly enjoyable and special Moss is. It is the closest we’ll get to a system seller for the PSVR, and a no-brainer for owners of it. The impact this game had on me is broad. The story was so alive and magical. The voice acting drew me in and roused my curiosities. Quill won me over the instant she appeared on screen. I’d like to say how effortlessly this game charmed me, but that would undercut the obviously massive amount of love and effort that Polyarc has poured into this game.

Moss is one of those games that is, in the purest and simplest way, golden. PSVR has found its champion, its poster child. Quill is so happy to have you join her on this journey, and the camaraderie you two create is unforgettable. I highly suggest tagging along, you won’t regret it. So when she squeaks and holds up her adorable little arm, make sure you don’t leave her hanging. This is an adventure you want to experience every part of.

Moss is available on PSVR.