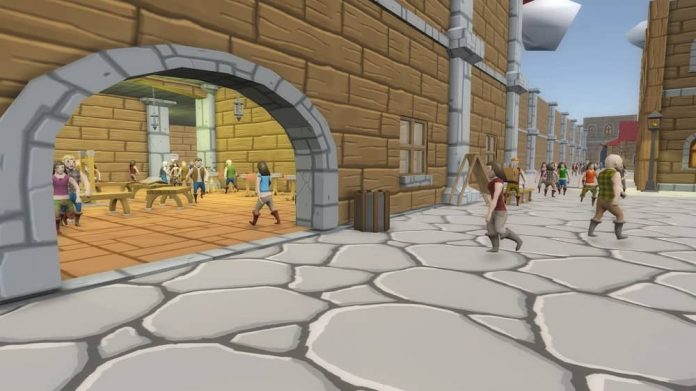 Running an RPG item-shop is not the easiest job in the world.

If you’re not following “The Chosen One” round to make sure they don’t steal anything, you’re having to explain to your wife why you took sixteen pairs of soiled leather shoes and six hundred poisonous berries in lieu of payment.

Shoppe Keep isn’t the first game to cast you as a fantasy shop owner (no, not that kind of fantasy shop); Recettear: An Item Shop’s Tale featured a similar behind-the-counter take on role-playing games. However, while Recettear was largely story-driven, Shoppe Keep is all about the money — and consequently, it feels a little hollow. True, there’s plenty to do in Shoppe Keep as you seek to transform the single, limited location you start the game with into a thriving mega-store. You start with a mere hundred gold pieces and from there you have to purchase stock and fixtures, reinvesting the money you make. All the while you’re keeping an eye out for thieves and sweeping the floor whenever someone treads dragon dung into your shop.

Assuming, that is, you can get to grip with the game’s controls which are a little unwieldy. Likewise, Shoppe Keep’s interface on console can be baffling at times; an actual in-depth, interactive tutorial would have done wonders for the game. But developing your store can prove satisfying, particularly when you’re able to hire staff, leaving them to do some of the busywork.  Being able to pay an adventurer to gather items from a dungeon is a nice touch, though you’ll find yourself wishing you could take on that task yourself, rather than the action happening off-screen. And while crafting can prove a real grind in some games, here it’s your bread and butter as you work to create more saleable items. Succeed in your endeavours and, assuming you don’t get too greedy with your prices, you’ll be able to sit back and watch customers flock to their store. At which point they’re likely wander into a local crypt and get murdered, discovering that a flashy, enchanted sword is no substitute for experience. But, hey, that’s not your concern.

However, Shoppe Keep never really drew me in. It’s not that empire-building can’t be interesting, but there’s nothing to drive you forward, no grand end-goal. You never get to build a chain of fantasy mega-malls, for example, and with no semblance of a story you’ll start to wonder why you’re playing.  Coupled with the clunky interface, it feels like the game’s still in early access, even though this is Shoppe Keep’s final release.

Shoppe Keep definitely has potential and if the game’s sequel (which is already in development) can take things to the next level, it may well be worth keeping an eye on. But right now, Shoppe Keep’s a curio rather than an essential purchase.