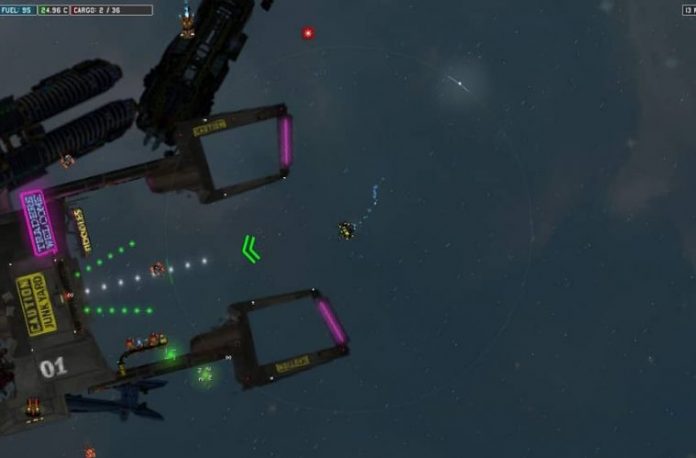 I went into 3030 Deathwar Redux without any knowledge of prior incarnations of the game. Even so, I could tell,  from the first thirty seconds of play, that this was a refined experience.

It’s evident, in every pixel, the work and love that has gone into making this zany sci-fi masterpiece.

Our journey begins with ne’er-do-well and rogue salvager John Falcon exploring the floating detritus of a wrecked ship in space. We control his movements in a jet-pack equipped zero-g suit, shooting holes in wreckage to make new pathways, picking up all the items we find, including stranded survivors. Soon, we are back on board his ship with sidekick Kent (a cute droid who looks like a walking TV screen, and expresses himself with sideways emoticons), and Vasquez, a badass mechanic who looks like she was inspired by Ripley from Alien. All the characters in 3030 Deathwar Redux are designed and drawn beautifully, with almost lavish detail. They capture the spirit of old-school 2D RPGs, where a few visual details speak volumes about the character and stoke a player’s imagination. 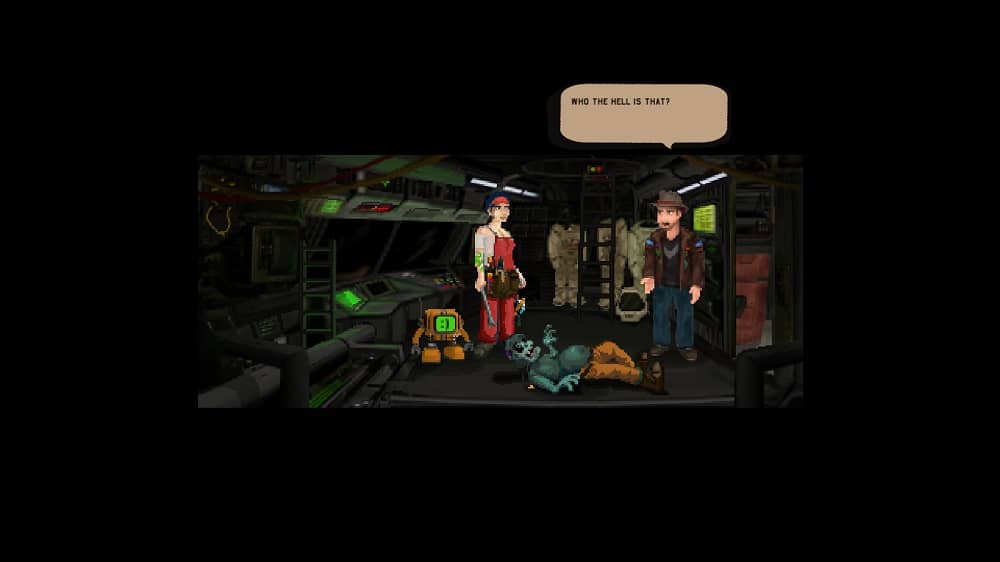 Soon, after navigating the cold depths of space using a surprisingly in-depth system, we reach a space port. When salvaging the ship, and listening to the crew’s banter, I felt like this game had been heavily inspired by the charm of Firefly, but here, in this hive of scum and villainy, the game’s other influences become apparent. Deathwar is old-school Star Wars through and through. Look at a slug-man the wrong way, he’ll set his goons on you. Give too much information to the corrupt cop, and he’ll screw you over. Don’t complete your courier mission on time, and your client will default on their pay. It’s at this point in the game that the genuinely intimidating possibilities of Deathwar open up.

The phrase “open world RPG” is bandied around a lot these days, but I’m rarely as impressed by their scope as I once was. Deathwar, however, is genuinely tremendous in ambition, boasting a host of different star systems, unique bases within those systems, a cast of characters that react and respond to your actions, and even move around of their own accord. 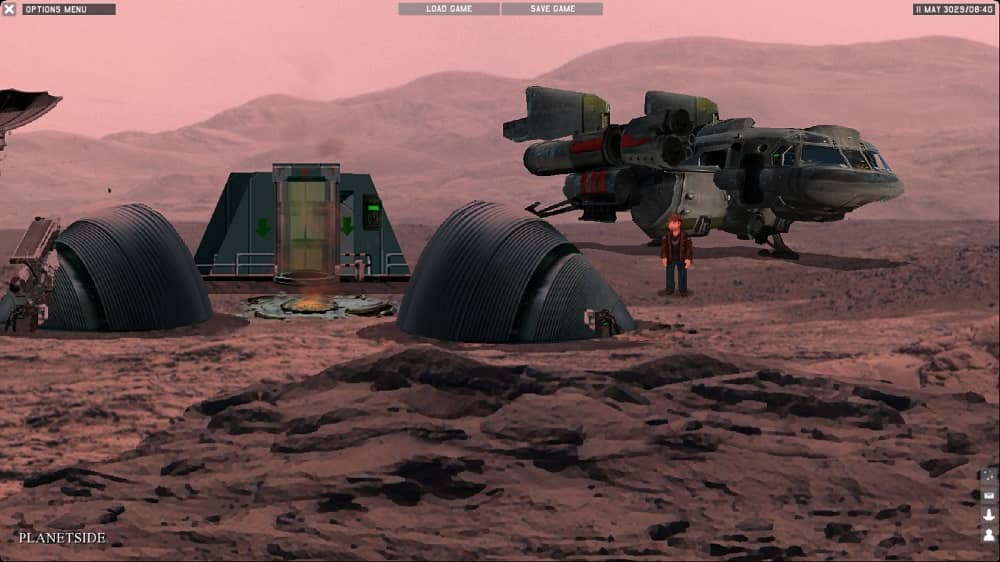 There are so many different gameplay elements in Deathwar that I found I was never getting bored (and ended up playing twice as long as I intended). Want to spend your time hanging around dodgy bars, talking to sex droids and drug dealers? Go on ahead. Want to spend your time in a ship searching the outer reaches of space for junkheaps to salvage, feel free – oh, but watch out for the galactic crime-lords trying to put a stop to any salvaging. Then there are mini-games and side-quests – some offering yet further mechanics. You can play as a criminal, or keep it above board. You can be a good guy, or throw fuel onto the fire and watch people burn. Deathwar is an earnest attempt to bring a galaxy of scumbags to life, and it works.

The devil is always in the details, the small things, the fine touches. Especially when it comes to big RPGs. These small charms often make up for gross errors. Oblivion was buggy as hell, but we all forgave it for its mood, its colourful charm. Deathwar has that charm, whether it be the haunting pop-tracks that play while you explore the darkness of space, which adds immense; or the offbeat humour of most of the dialogue. Even in the subtle touch of the Japanese and Chinese influences, this 3030 world is reminiscent of Blade Runner, a future where cultures have blended. 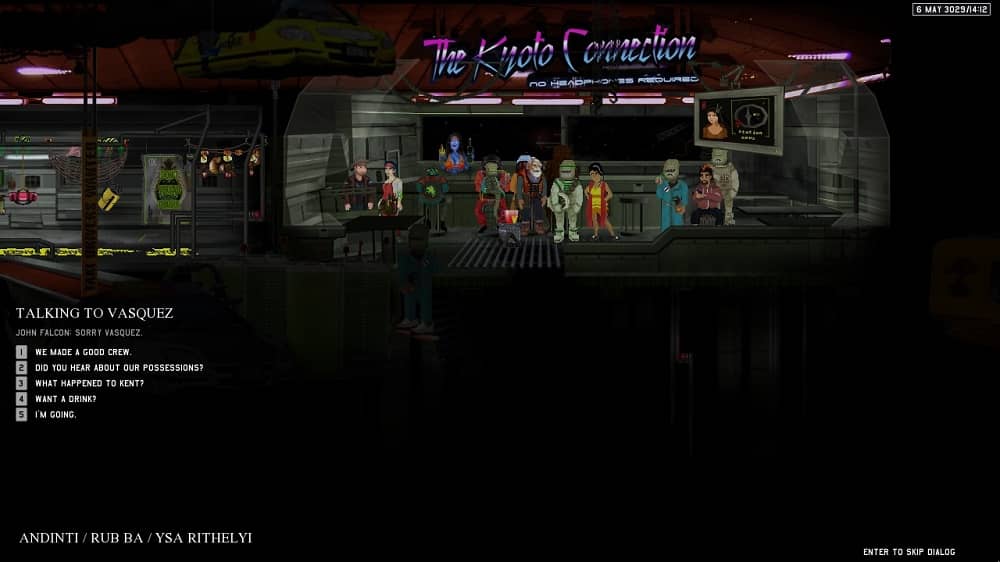 “The heart of RPGs”

The main quest, which holds the immense open world experience together and gives you some direction, is surprisingly entertaining. There is a Monty Python-esque feel to a lot of the dialogue, and while there are perhaps some dull or flat lines, the story adds to the overall charm. Despite this, I found myself largely ignoring the main quest-line at the beginning. Instead, I did all the jobs I could, for as many clients as possible, to build my reputation and raise enough money so I could buy a ridiculously expensive, but powerful, fighter ship. I lost myself in this personal quest to acquire an all-powerful ship – and had hours of fun stacking up enough currency through various (and sometimes nefarious) means to do it. This is the heart of RPGs, making the game your own, and Deathwar lets you do that.

3030 Deathwar Redux promises a lot, but it delivers on those promises. I can’t remember the last time I played an open world game that sucked me in so quickly. And like all great open world games, it even has its own catchphrase: “I hear there’s going to be another Deathwar…” which is always met with stony, alcohol-heavy silence. Don’t mention the Deathwar, if you can avoid it, people are still tetchy on the subject.

Now, if you’ll excuse me, I owe a few people some credits, and there’s a galactic crimelord on my tail.