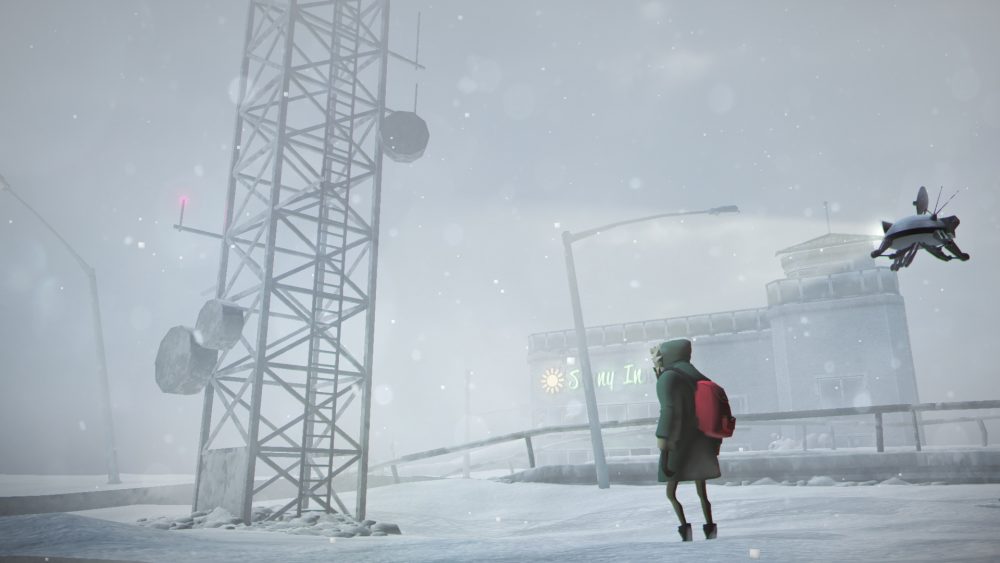 When I wrote about Impact Winter‘s PC release last May, I said it might be my favourite survival game. Nearly a year later, and now available on Xbox One and PS4, I still stand by those words.

Impact Winter, developed by Mojo Bones and published by Bandai Namco, is far from perfect. Let’s get that out of the way first. The PC release was full of bugs, and while it was patched numerous times following release, a number of those issues still remain in the console release. It’s a bit laggy, even on Xbox One X. There are numerous graphical glitches, with scenery popping in and out at will. You’ll often get stuck on said scenery – or sometimes stuck on nothing. More than once I’ve had to restart the game just to unstick myself from some unknown obstacle. Impact Winter is far from perfect – but I can’t help but love it anyway.

I’ve always loved the idea of survival games. The freedom to play out your last days however you wish; saving yourself and your comrades from a bitter end. The trouble is, many of them are needlessly complicated. Most survival games are chock-full of convoluted crafting menus, skill trees and all manner of upgrades. Not so with Impact Winter. It’s perfectly streamlined, making it easy to get to grips with and welcoming for even the most novice of players. 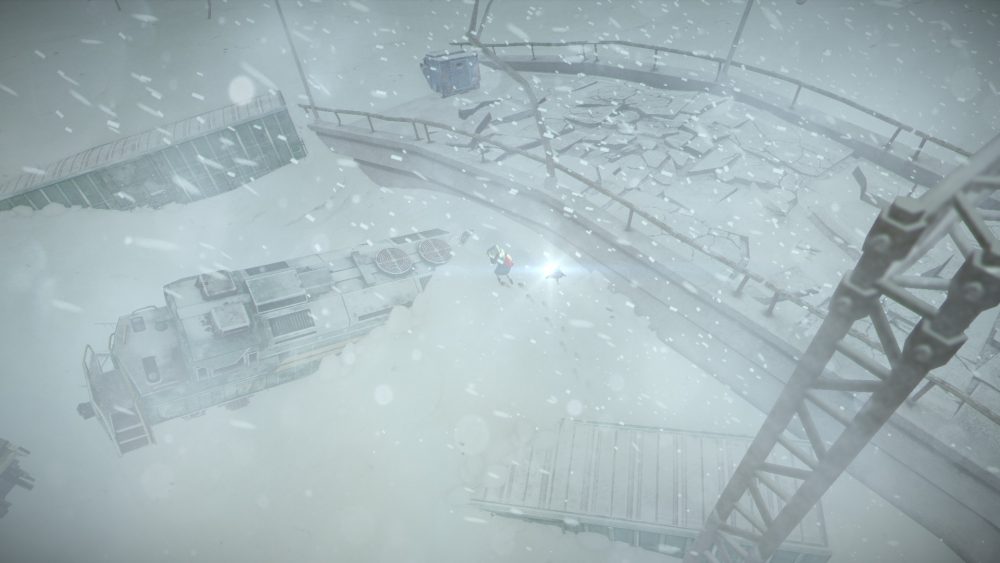 Impact Winter puts you in the role of Jacob. He’s lost his family in a catastrophic natural disaster that’s devastated North America. Few survivors remain, and those who do must battle sub-zero temperatures and tens of feet of snow. Jacob, along with four other survivors, has found refuge inside a church. Mostly buried under the snow, they get in and out by climbing through a smashed window in the church’s tower. In there, each survivor has a unique and equally important role to play.

You, as Jacob, are the leader, in charge of scavenging, gathering rations and ensuring everyone’s wellbeing. Each other survivor has their own story, with individual quest lines for you to follow. Wendy, for instance, an elderly woman, is the group’s cook. After venturing to her abandoned home and retrieving her cookbook, she prepares hearty meals for everyone. Christophe, on the other hand, is more technologically-minded, and can help you by upgrading important bits of tech to aid your survival.

The end is always in sight

Central to Impact Winter‘s plot and gameplay is Ako-light, a drone-like robot that accompanies you on your missions. Maintained and upgraded by Christophe, Ako provides your minimap, as well a host of other helpful tools such as a radar to spot buried items, and the ability to dig them up. When the game starts, you’re told that help will arrive in 30 days. An SOS message has been sent, but nobody is going to reach you for a month. With the help of Ako-light, that countdown can be continually reduced by gaining XP, and completing various missions.

The timer, of course, reduces as in-game time passes too, but by levelling up and completing missions that involve fiddling with radio signals and placing signal boosters around the map, you can drop the timer even quicker. Levelling up is inevitable as you complete missions, find new areas and achieve goals, but the other signal-boosting activities can be skipped. It means that your in-game time will vary massively depending on how you play the game.

No matter how you decide to approach Impact Winter, the goal is always the same: survive until the countdown reaches zero. It both motivates and discourages at times; seeing tangible and measurable progress as the days tick by is heartening, but at the same time knowing you still have so far to go when you’re struggling for rations can be demoralising. It’s a simple but effective gameplay mechanic that really encourages the player to use their game time however they want. 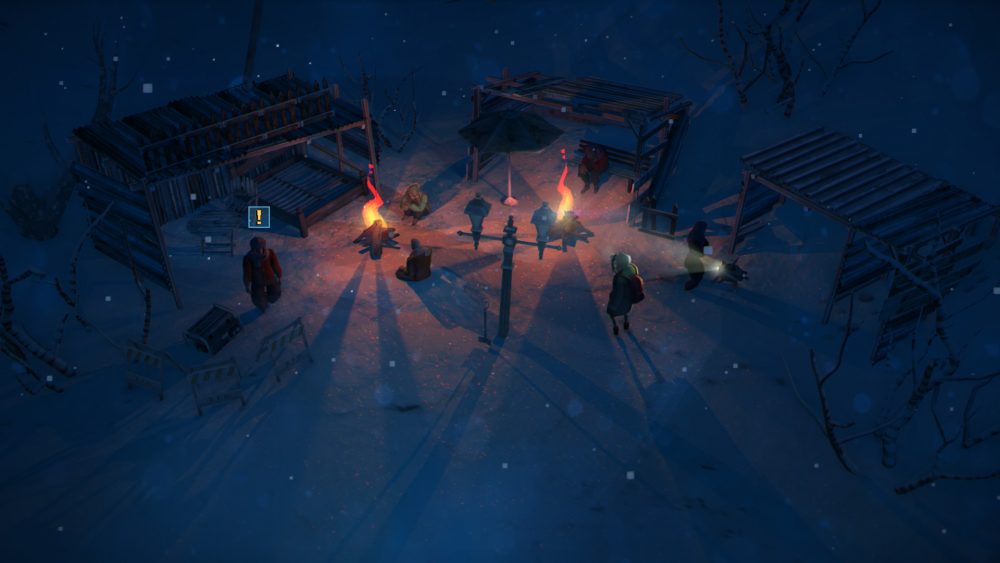 Theoretically, you could focus your energies solidly on boosting the signal in order to bring the countdown as low as possible. But when you need to juggle this with ensuring everyone back at base is fed, watered and warm, it makes it a little more tough. The joy of Impact Winter is that you can approach the game in whatever way you wish. While every character has their own quest line – and completing them will be helpful in aiding your survival – nothing is mandatory. With your only stipulated target being to “survive”, it’s entirely your choice how you go about it.

Several days might simply be spent exploring your immediate vicinity. You’ll need to know where supplies can be found, because your initial stash of food and water won’t last very long. Impact Winter‘s map is vast, and with much of it appearing as a mere blank canvas covered in snow, you’ve got to rely on a good sense of direction and the odd decipherable landmark to make your way around. Providing its got battery, Ako-light’s minimap will help in highlighting nearby areas of interest, as well as marking the position of your selected mission. But if you’re out for too long, that battery will drain, and you’ll be totally on your own.

Impact Winter is a constant balancing act. Every player will likely have different priorities, and that’s part of what makes the game so interesting. Focusing on one questline rather than another will massively shape the experience, as will choosing to march to the beat of your own drum. There is no right or wrong here. How those 30 days of survival play out is entirely down to the player.

As much as I’ve thoroughly enjoyed playing Impact Winter again, I can’t completely ignore its issues. The few glitches I’ve encountered so far aren’t gamebreaking, but they are enough to stop it being a flawless experience. There are other areas where it could have been better polished; the lack of voice acting for characters makes its world harder to be immersed in, for example. And while its soundtrack, filled with haunting melodies, is stirring, the same few tracks soon get repetitive.

It’d be unfair to chastise Mojo Bones too much for these imperfections, though. There are plenty of things that could have made Impact Winter better, but even as it is, it’s an extremely enjoyable and accessible survival game. Without convoluted gameplay systems and a myriad of menus to get your head around, Impact Winter‘s streamlined approach to the genre is faultlessly welcoming and instantly engaging. It means it’s perfectly at home on console, too, and considering the budget-price release, you probably ought to at least give it a try.

Impact Winter is available on PC, Xbox One and PS4. We reviewed the Xbox One version.