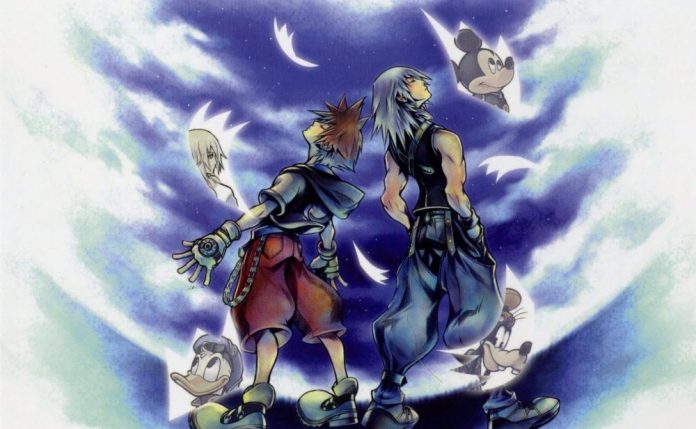 Even the best games can be ruined by bad battle systems, but what of the daft ones in the middle?

I’ve been making my way through the Kingdom Hearts series by replaying every game in the HD 1.5+2.5 ReMIX collection and this past weekend I finally finished Kingdom Hearts Re:Chain of Memories. While I enjoyed my time with the game more than I was expecting to, the only thing I could think about after finishing it was: why, out of all the possible combat systems a game could use, does this one use a card-based battle system?

The card-based battle system in Kingdom Hearts Re: Chain of Memories is a peculiar one. Cards are assembled into a deck that uses basic attack cards, magic cards, support cards, and summons. You can create up to three decks, but each deck is limited by your current CP, or “Card Power”. By levelling up, you can choose to increase your HP or your CP, the latter allowing for more cards in your deck. 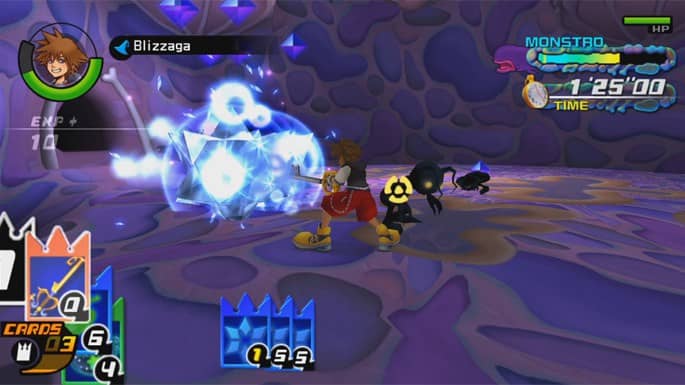 The combat itself is a bit hard to get your head around but works pretty easily in practice. With your deck set up just the way you want it, it’s shuffled in the order you’ve created. Playing a card will have Sora act in real time, so if you play a keyblade card he’ll then attack with his keyblade. Enemies can cancel the card you’ve played, nullifying your attack, if their card matches or is a greater value than the one you’ve played (which you can do as well). To combat this, you can stack up to three cards to play at once, combo-chaining cards together so that they’re harder to cancel. Certain combinations of cards can create different effects, called Sleights, which are also optionally gained during level-ups. Although the trade-off for playing a sleight in combat is that the first card in a trio that make up a sleight is sacrificed, unable to be used again for the remainder of the fight.

As complicated as it sounds, the game doesn’t throw too much at you for most of it, making the majority of the game a pretty smooth experience. However, once I ran into the late game content, particularly when fighting the rush of Organization XIII members near the game’s final moments, I began getting frustrated. Because levelling doesn’t necessarily make you stronger or faster like in other RPGs, I had to rely solely on the build of my deck and my timing with playing cards. For so much of the game, I steamrolled through enemies by spamming basic high level attack cards. I could throw caution to the wind by performing combo after combo without ever needing to worry much. However, doing so here meant I’d quickly run out of cards to use and eventually run out of ways to fight. 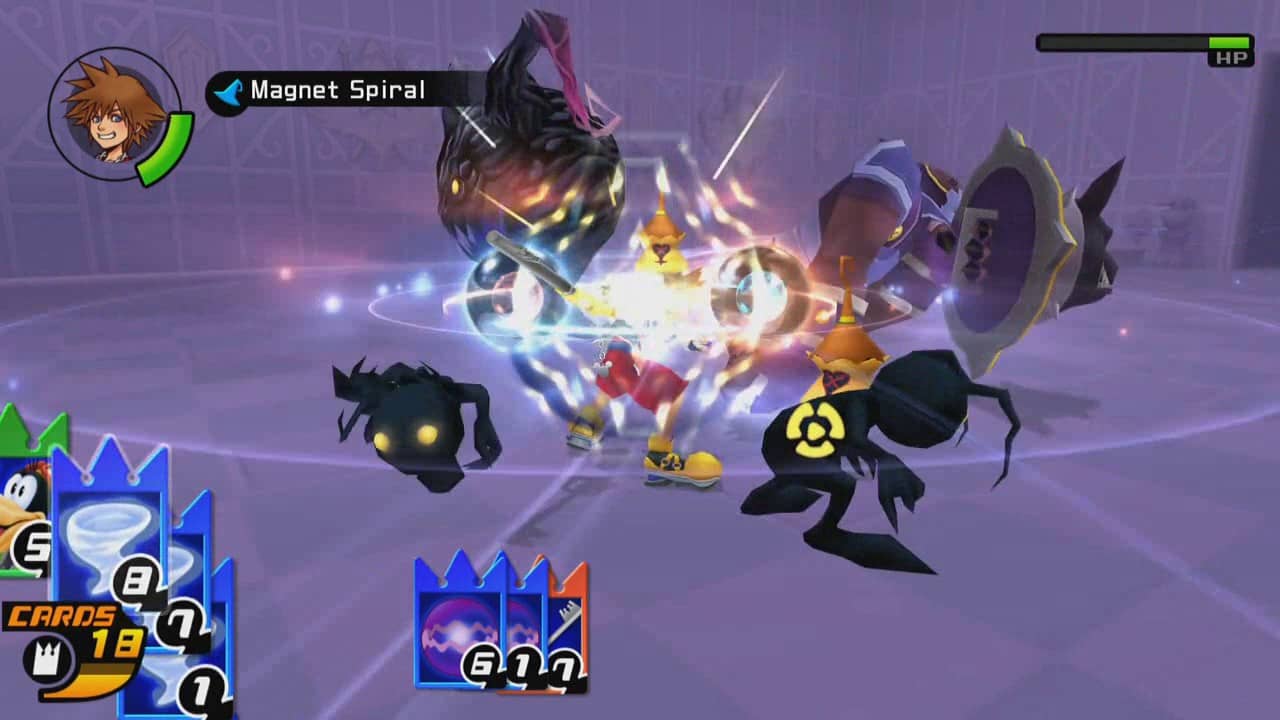 I don’t know if I could call Kingdom Hearts Re:Chain of Memories’ approach to combat bad per se, despite many people’s disdain for it. While I definitely had my own rage-induced shouting matches with my television while I tried to figure out a deck build that would work, it did make me think critically about every card I decided to use. Yet for as interesting as its quirky battle system is, I can’t help but wonder why it exists in there at all.

The notion of combining a collectable card game with a role-playing game isn’t something unique to Kingdom Hearts, of course. The idea has existed for quite some time and has been implemented in plenty of other games to varying degrees of success.

Other titles like Baten Kaitos: Eternal Wings, Lost Ocean and Phantasy Star Online Episode III: C.A.R.D. Revolution used similar card-based combat systems. For Baten Kaitos, the game garnered plenty of praise and has become one of the Gamecube’s most memorable cult classics. Phantasy Star Online’s third PlayStation Portable outing wasn’t received as well partly due to the drastic and surprising change in direction from the series’ previous games. Yet as far I’m concerned, no card-combat game has ever come close to matching one of my personal all-time favourites Phantom Dust. 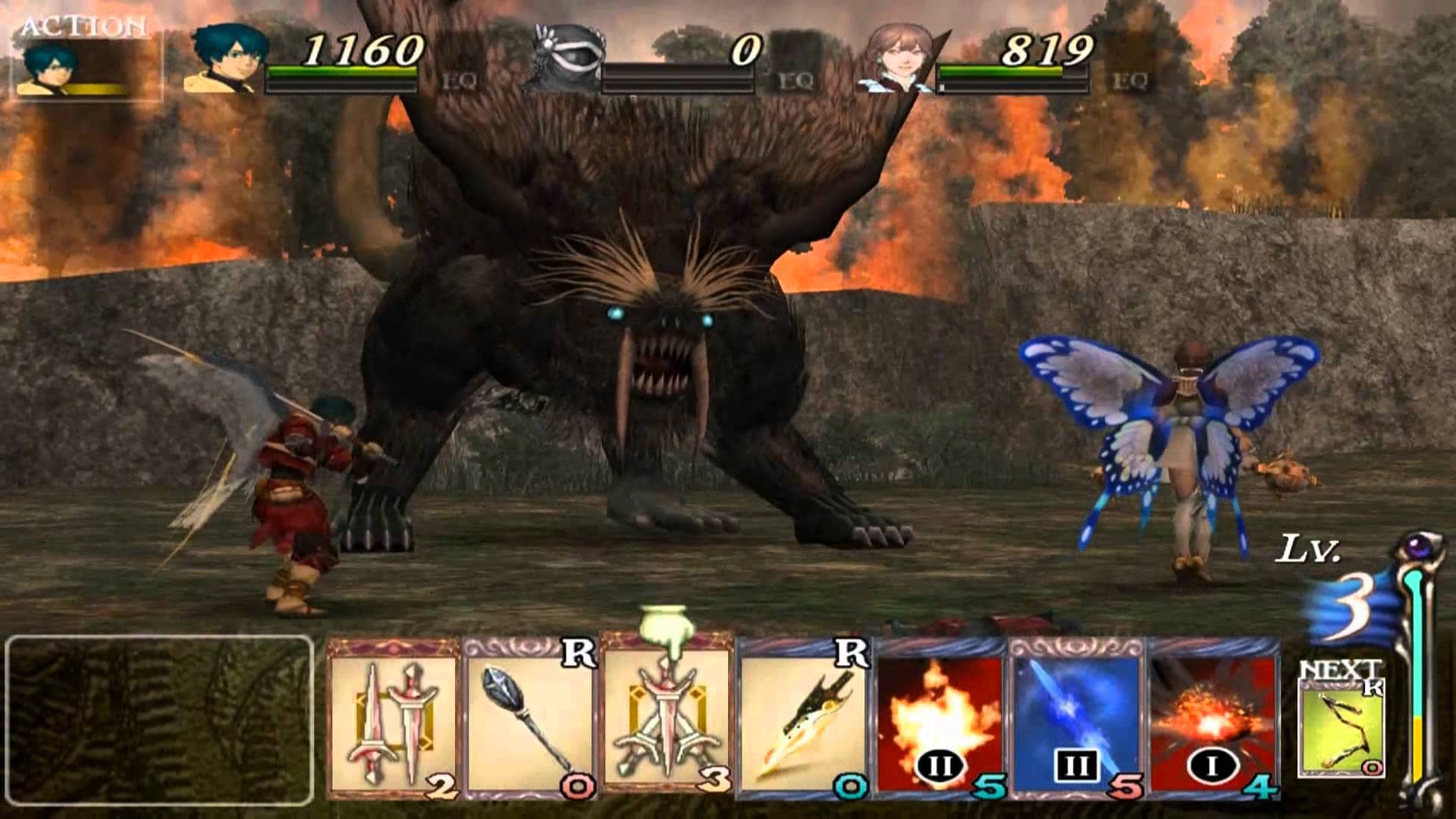 Originally released in 2004 on the original Xbox, it might be a stretch calling Phantom Dust’s battle system card-based, although it still takes heavy influences from the collectable card game formula. Battles take place in a 3D arena with different skills mapped to the face buttons. By collecting Aura across the combat arena, you’ll be able to use your skills but doing so will remove your skill from your loadout. Like a card from a deck, your skills are finite and will run out before the match is over if you’re not careful. With five different categories of skills to use, along with a complex variety of ways to use them, Phantom Dust was able to do what Chain of Memories couldn’t, at least for me personally. It felt engrossing, fast-paced, filled with action, yet structured in a way that made me weigh each skill’s importance.

While the original never reached the heights I would have hoped for when it first launched, it’s gotten a lot of attention as of late. In 2014, Microsoft announced a Phantom Dust remake for the Xbox One, yet the studio behind it was shut down soon thereafter. The story of Darkside Games’ demise is an interesting one, but Xbox’s head Phil Spencer claimed that the game still might happen in a 2016 interview with Polygon, if you’ll believe him. 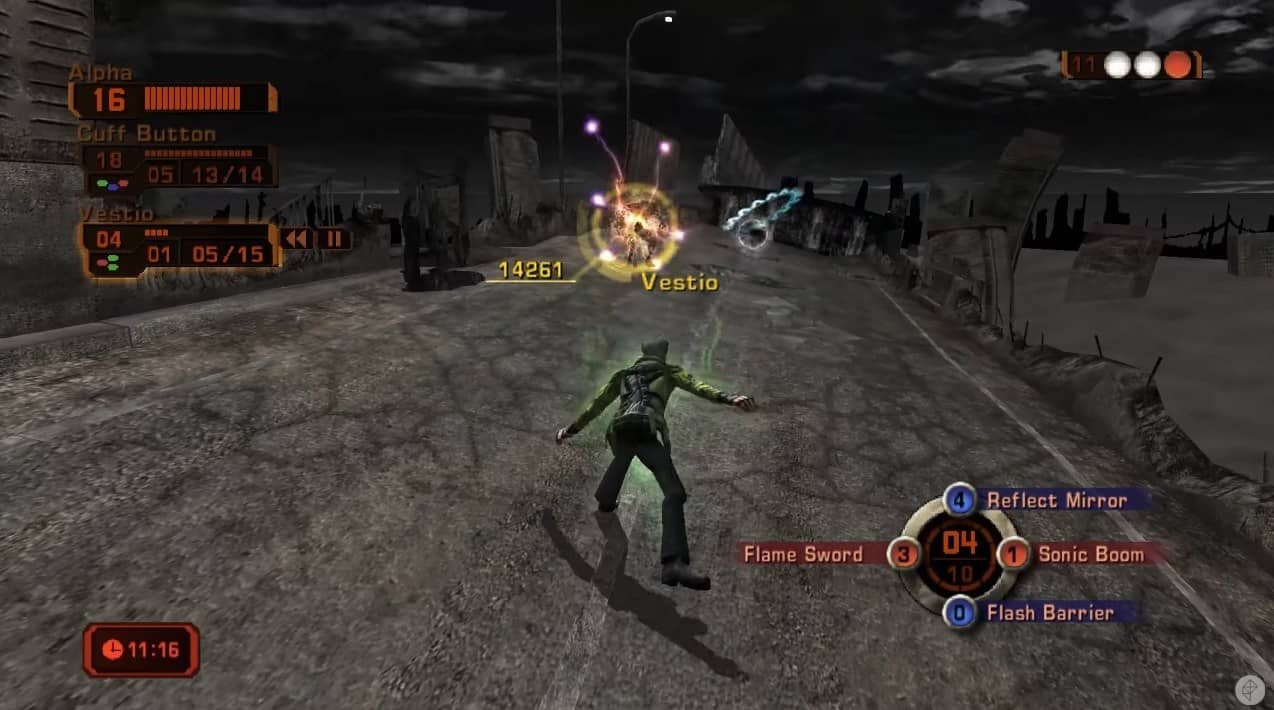 As much as I loved the original Phantom Dust and its unique take on combat, I’m not sure if a remake would really light the world on fire like I’d want. The original’s re-release was great but when speaking about it with friends it made me realise the limitations of card-based battle systems. They are almost always a gimmick, rather than something inventive and original. We’ve had enough of them at this point that we’ve seen almost every possible permutation and they simply aren’t very popular. For most people, myself included, we’d rather either play a card game or an action/RPG. Not something in the middle.

It remains that a good battle system can help turn a mediocre game into a hit and vice versa. Since games are so often focused on battle, whether with cards or not, the way in which we fight will always be an important piece of the puzzle. Maybe it’s best to leave the card mechanics in games like Hearthstone and Gwent, where they belong, but all it takes is one great game to change everyone’s minds. Although I’m sure Kingdom Hearts probably won’t be the one to do it.