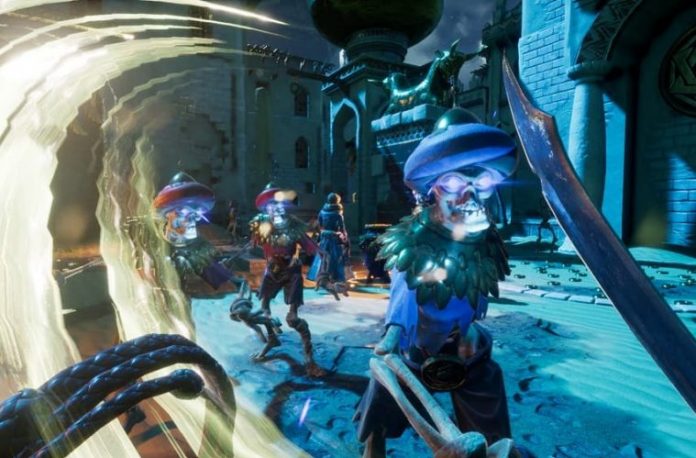 Uppercut Games, creator of City of Brass, has a lot to answer for.

It turns out that its procedurally-generated Arabian adventure is really rather good, robbing reviewers of the chance to overuse the phrases “City of Ass” and “Arabian shite”. How inconsiderate can you get?

City of Brass’ premise is that your whip-wielding adventurer, who is definitely not Indiana Jones, has ventured into an ancient genie-cursed city with the sole intention of plundering its riches. This entails battling your way across twelve levels, trying not to be murdered by the city’s now undead inhabitants or skewered by traps. The game’s visual aesthetic is strikingly similar to Prince of Persia. Though that isn’t surprising since both games draw from the same historical and cultural sources.

But whereas Prince of Persia let you rewind time to undo your mistakes, City of Brass is far less forgiving. Thanks to it featuring permadeath, should your life meter dwindle to nothing you’re back to square one. You needn’t panic, though; there are tweakable buffs that make the game more merciful. There’s one that doubles your health, for example, while another lowers enemy frequency. Or, should you be a glutton for punishment, there are also unlockable curses that make the game almost sadistically tough.

True, employing a permadeath system coupled with procedurally generated levels is a risky gambit. Not only can one false step be lethal, the next time you play that pit-trap will be somewhere else; you can’t rely on your memory to get you through. But City of Brass pulls it off because its core gameplay is such a blast. City of Brass has clearly been created with speed-runners in mind; each level featuring a time-limit after which point you’re pursued by a couple of particularly unpleasant, unkillable foes. You have time to explore, but quickly dispatching foes one after another without taking a breath is a joyous experience, due largely to the presence of the whip. This insanely entertaining weapon has so many wonderful uses. It can be used to swing across rooms, knock swords out of enemies hands, and even activate traps. It’s a genuine lifesaver.

It doesn’t matter that you’ve got a sword; the moment you enter an area you’ll be casting your eyes about, looking not for treasure, but mentally planning out how to eliminate your enemies in the most spectacular fashion possible. Why simply stab an enemy when you can explode a brazier with your whip, incinerating them? Then, grinning like an idiot, you could sidestep the armless skeleton charging at you, taking its legs out from under it with a single snap. And to finish, you could pitch an urn at its head before racing onwards towards the exit. Success! And you looked like a such a bad-ass every step of the way.

While City of Brass isn’t technically a modern-day tale, it still made me feel more like the man in the brown fedora than many other releases. There are, in true rogue-lite style, upgrades to be had; both permanent and temporary, which bolster your chances of not meeting an unpleasant end. No doubt there’ll be plenty of players who’ll tackle the game without any advantages just to prove they can. City of Brass does have a few rough edges. The first boss fight, for example, is absurdly tricky on consoles. It’s naturally harder to control your whip using a controller than it is using a mouse, but you’re nevertheless expected to be able to hit the boss’ multiple incoming projectiles with said weapon. Another oddity is the way that you can’t easily back out and save your game before continuing later, meaning you’re expected to complete multiple levels in one sitting. The story also takes a back burner, which makes sense given that the game’s levels are randomly generated, but I’d have loved to have seen more of the City of Brass‘ mythos explored. Instead, the story becomes largely incidental.

The real measure of City of Brass‘ success is just how often you’ll keep coming back to it, no matter how many times you’ve been slaughtered by the city’s many monsters. Even when I ended up being dispatched earlier than I had done on my previous playthough, I jumped right back in, determined to push on. It’s engaging, gorgeous, and stylish. Even if the notion of permadeath is anathema to you, it’s well worth stepping through City of Brass‘ gates.

City of Brass is available on PlayStation 4, Xbox One and PC. We reviewed the Xbox One version.