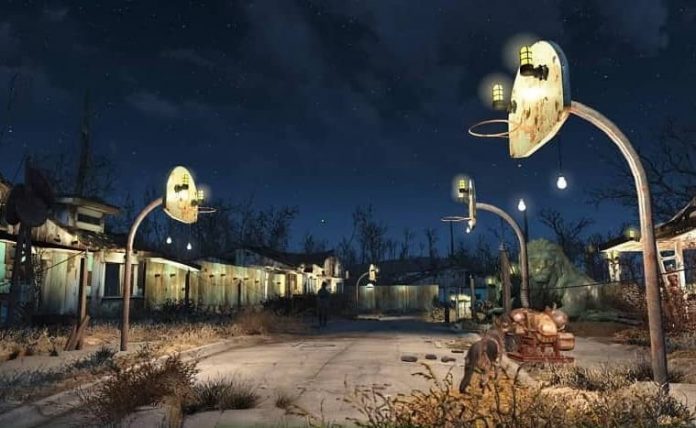 In recent weeks, my dad, great man that he is, has been playing Fallout 4 at my recommendation.

My dad is a gamer through and through so the fact that he was playing Fallout 4 isn’t really a surprise. Believe or not, though, he actually took a little bit of convincing. At first, he was stubborn about it. He watched me play for a long time before I was able to convince him that he’d love it. Even then, after he’d already put a few dozen hours in, he will still sure that he had no interest in building a settlement.

He didn’t understand the controls well enough to pull up the menu, let alone scroll through the dozens of possible items to build in your town. Then, one day, I had sauntered over to my parent’s house, unsuspecting, probably eating their food, and glanced at the television screen. The following, my friends, is what I saw:

Private treehouse in the sky 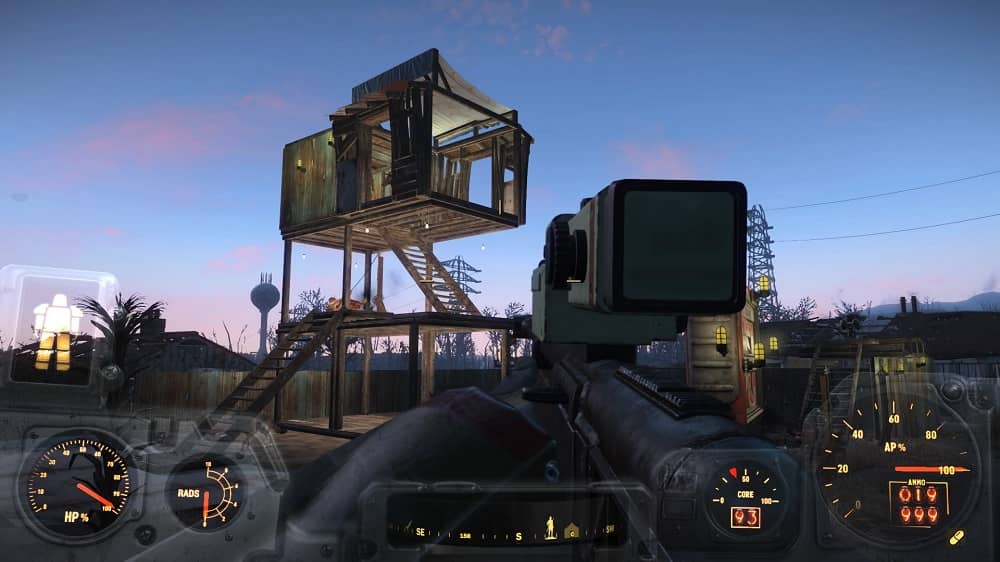 This structure apparently came about after many hours of sleeping in a bed that was shared by my dad’s many villagers. A man’s bed is his castle; the place in which he unwinds after a hard day of killing bandits and super mutants. And yet his villagers, the ones eating the food and working under the roofs that he built with his bare hands, had the audacity to sleep in his bed? Well, no more.

This “Private Treehouse in the Sky” was nearly impossible for his villagers to climb up to, creating a much more private sleeping experience. No one has dared sleep in his bed since. Fair play, dad. 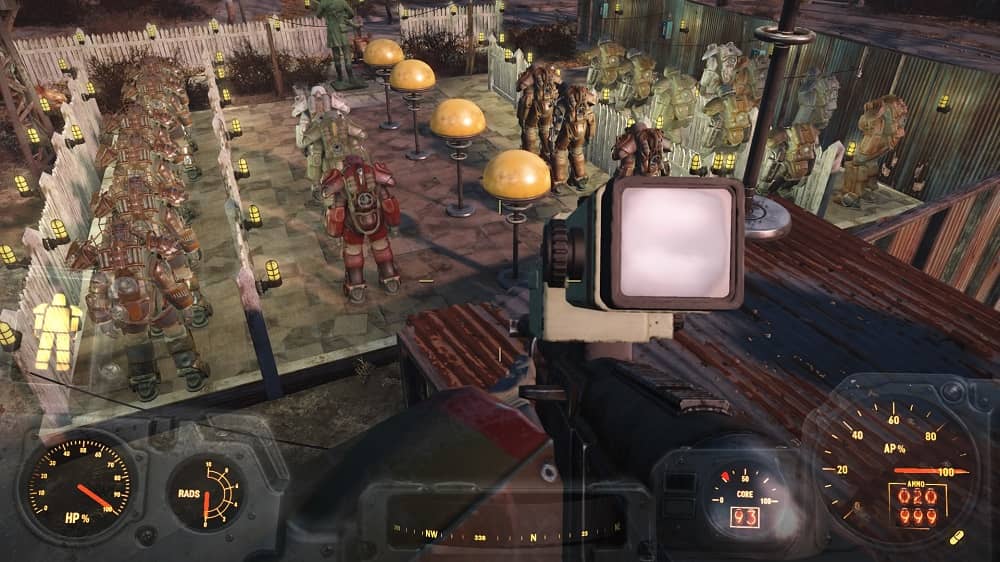 Like an expensive car, power armour must be kept spick-and-span, being repainted and kept in impossibly straight lines, in a well-lit area, completely fenced in. No roof, though, that would be excessive.

You may also notice that the power armour suits are also organised by type. Raider armour’s on the left, followed by what he believes are T-50+ models with which he has painted in a flaming hot red colour as well as a lovely “winter” set. Vera Wang, eat your heart out. His power armour also includes a few T-60s, some T-54s, and many more.

When formally interviewing him for this article, my father stated that he acquired this power armour by “Stealing, buying, or collecting but mostly collecting”. The many bandit screams I heard while he played beg to differ. 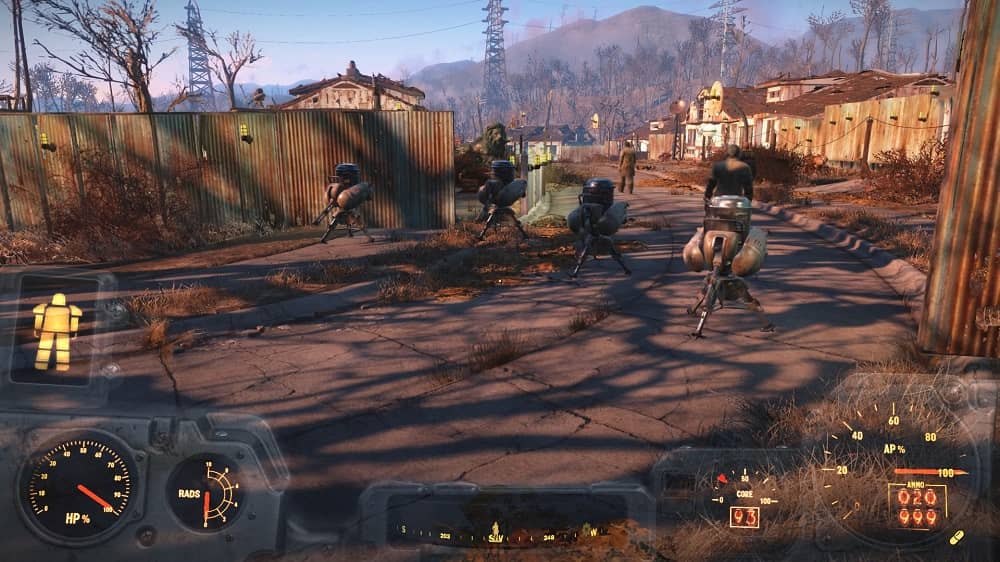 With great settlements come great responsibility. This means that you’re going to be raided pretty frequently. Good old dad decided he was tired of bandits attacking his village. His villagers are special to him. Even the two-headed brahmin that like to climb up on the roofs and judge people. So he took to building. Turrets, that is. With those turrets came a town so defended that even the likes of two deathclaws couldn’t penetrate. 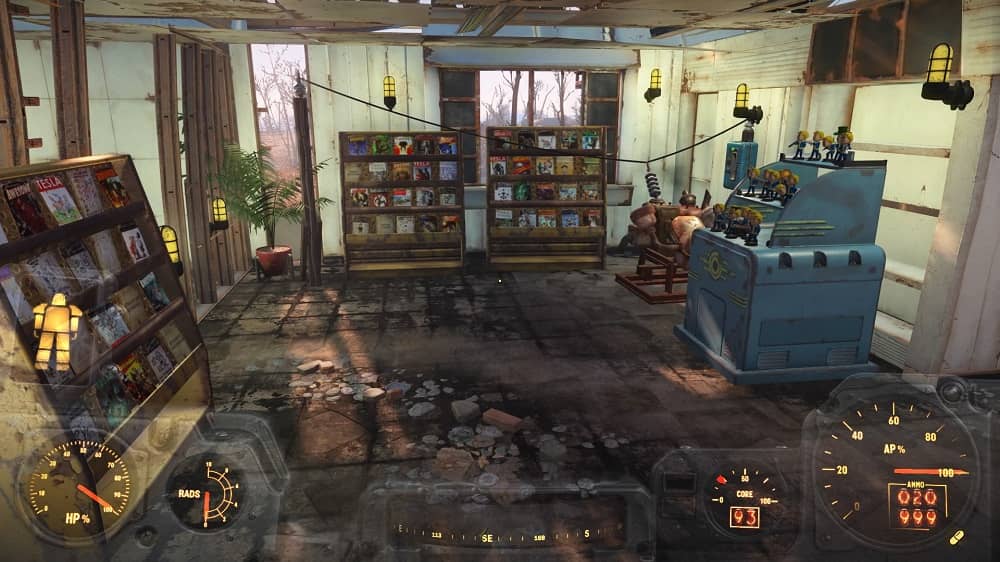 For those of you that have ever won a trophy, you know what it’s like. You want to display it; to show it to as many people as possible. That’s exactly my dad’s philosophy for his bobblehead and magazine collection.

Almost every item in his collection was looted “legitimately” he claims, with the exception being a particular bobblehead he swears would have been impossible to find without looking it up. And he had to have a full collection. Do you really blame him? 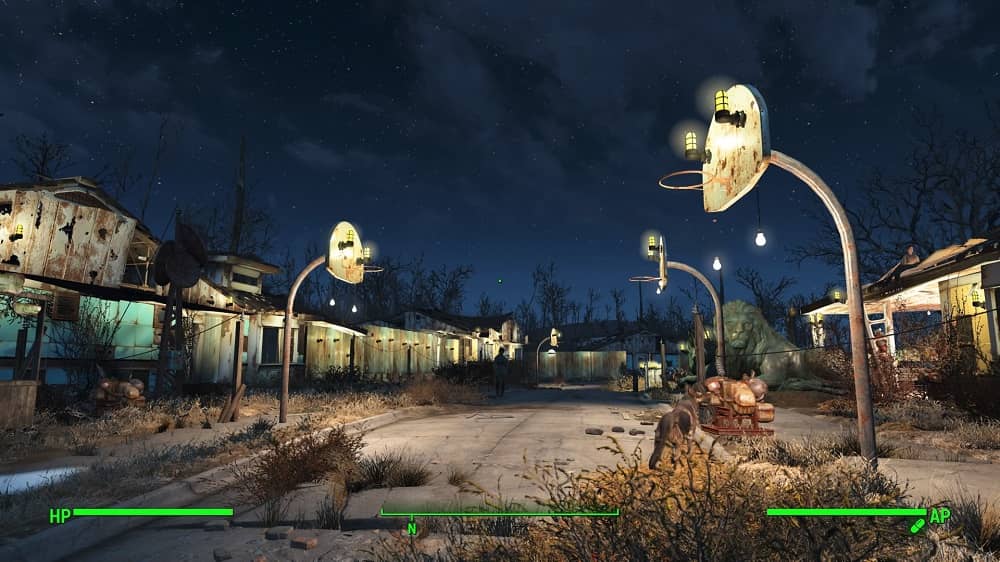 The final bit of my dad’s settlement I’d like to show off is the entrance. If, for no other reason, than to highlight how well-lit everything is. The basketball hoops have two lights each on them, mimicking street lights, but probably hindering the actual practical use for them. Then again, I doubt any of his villagers are in the mood for a game of b-ball anyway.

If you look carefully, you can see that the lights extend far down into his town, going past the large lion statues, past his power armour collection all the way to the end. No darkened corner, no absence of light; a shining beacon in the dark world that is Fallout 4.

Yep, I give up. I’ll stick with my one bed and my 50,000 tato plants that feed my three villagers. Match point goes to dad.