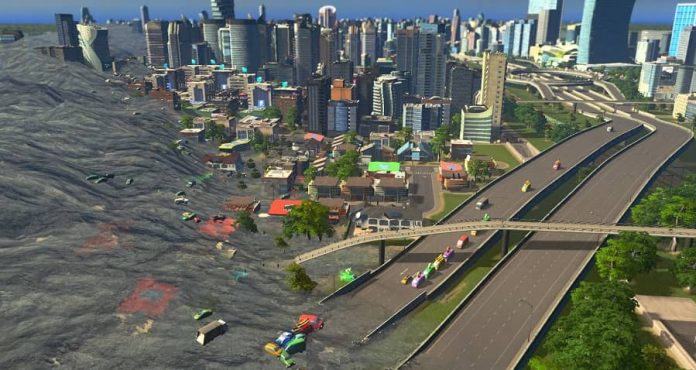 There was a hole here. It’s gone now. No, wait, it’s back; along with a tsunami, meteor strike, tornado and other horrors – all thanks to Cities: Skylines’ Natural Disasters DLC.

I wasn’t planning on annihilating my city in one fell swoop, even though the inhabitants of Whinersville had been rubbing me up the wrong way with their incessant demands for “clean water” and “electricity”. I merely sought to shake them up a little; to make them appreciate their mayor more by subjecting them to the odd apocalyptic plague. But when the sinkhole I’d planned to inflict failed to materialise, I decided to opt for an earthquake instead. Nothing.

Inwardly cursing the perceived bugginess of Natural Disasters, Cities: Skylines’ latest piece of downloadable content, I clicked my way through the whole range of torments. It was only when a sinkhole warning appeared that I realised, to my folly, that there’s a delay between activating a disaster and having it hit the city. Five minutes later, Whinersville had been near-annihilated by about seven disasters. Still, it couldn’t have happened to a nicer city.

Some of the disasters are, however, a little lacking. The “sinkhole” looks like a dint in the city rather than an actual gaping sinkhole. I didn’t expect Whinersville to turn into Silent Hill with a single click but it was nevertheless distinctly unimpressive. Fortunately, the visual impact of the major disasters balance this out.

And that, in a nutshell, is Cities: Skylines’ Natural Disasters appeal. True, it sports additional scenarios that let you deal with specific disasters. It also adds the option to have disasters randomly strike your city. But the DLC will really find favour with those who appreciate the fine art of destruction; pummelling their city in spectacular fashion, only to rebuild it stronger than ever (adding shelters for any future occurrences).

If you’ve got a taste for bringing down the house then you can purchase Cities: Skylines – Natural Disasters on PlayStation 4, Xbox One and PC.