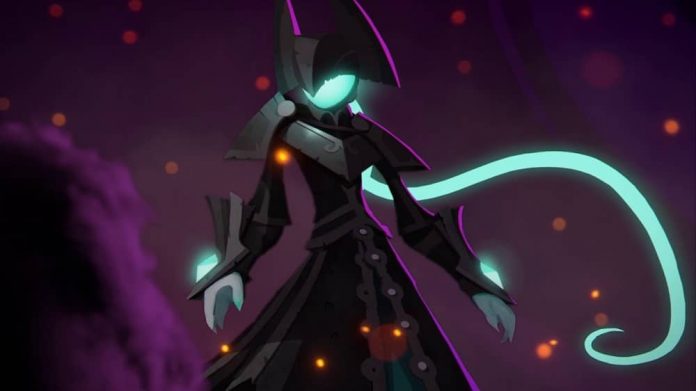 Solving one murder is the key to saving the entire world so, you know, no pressure.

Omensight, from the independent studio Spearhead Games, is a hack-and-slash platformer with so much to love it would be impossible to fit it into one piece. From its fluid combat to its host of intriguing characters, everyone will find something to enjoy about this fantastic game.

In Omensight, you play as the Harbinger, a warrior of legend who only appears in times of great crisis. Urralia is a land of many nations: cat, rat, bear, and bird; but they are all part of a great war. In the end, there is no way to stop the impending doom coming for Urralia’s people. When the world is swallowed up by the dark god of destruction, Voden, the Harbinger is summoned to find why and, more importantly, how to stop it from happening. All you know is that this entire chain of events was set off by one murder. By reliving the same day over and over, it’s up to you to solve this mystery and stop the world from being destroyed. A Harbinger of Hope

The game begins with you witnessing the end of the world, when a witch approaches you. She encourages you to go back to the beginning of the day to follow one of two characters, Draga or Ludomir, in order to find out what happened to them, and, ultimately, what caused the end of the world. Draga is the leader of the Pygarian forces and General to Emperor Indrik. Ludomir is a Rodentian freedom fighter who is determined to take down Indrik. Each day you will start with a new character, following them in an attempt to find out what happened to each and how those chain of events led to coming of Voden.

The gameplay mechanics for Omensight are easy enough to pick up and learn. Being a hack-and-slash game means that you’ll be pressing the light and heavy attack buttons to defeat enemies. Along with the normal two button combo combat, players will upgrade the Harbinger with new abilities the more you move forward into the game. Along with this, you can also make use of the abilities of secondary characters; Draga, for example, can use Yarbog’s Fire, a powerful spell that burns all enemies within a large area. Unfortunately, since the Harbinger’s gameplay never changes much, fights can soon feel repetitive, especially when you’re fighting in the same areas you’ve been before. A mystery worth solving

As you move through Omensight, your main goal is to solve the murder of the Godless-Priestess Vera. The death of the priestess is said to have set off the chain of events that lead to the end of the world. As you complete each day following important characters like Draga and Ludomir, you’ll piece together a dozen or so clues, all of which lead to the answers the Harbinger seeks. Those of you who may want to reach 100% completion should pay close attention in order to get all of the clues; once you finish the game, there’s no going back without starting over.

Omensight’s characters are what make the world shine bright. The engaging cast will keep players gripping their controllers until the last second. The dialogue is well written, the character design is gorgeous, and it all comes together to make a truly beautiful game. Omensight’s world feels full of life, and players will get to know it quickly as they progress. The map shows all five places where the most valuable events take place and the Harbinger will travel to each more than once. It’s a small world after all

Though there’s so much to love about Omensight, there is one big setback: the world is pretty small. Urralia is beautiful and full of life, but with only five places to visit, it can again become repetitive. And since the characters’ stories intertwine, you’ll find yourself visiting the same locations multiple times. Each location changes slightly depending on the time of day, but visiting the same locations eventually becomes tiresome. A game this beautiful just leaves us wanting more.

But even with its few limitations, Omensight was love at first sight for me. Urrailia and its citizens are vibrant and intriguing, begging for you to spend time with them. The combat may be slightly repetitive, but you’ll be too busy enjoying the story and saving the world to care. If you’re in need of an easy-to-pick-up hack and slash RPG, you can’t go far wrong with Omensight.

Omensight is available on PS4 and PC. We reviewed the PS4 version.