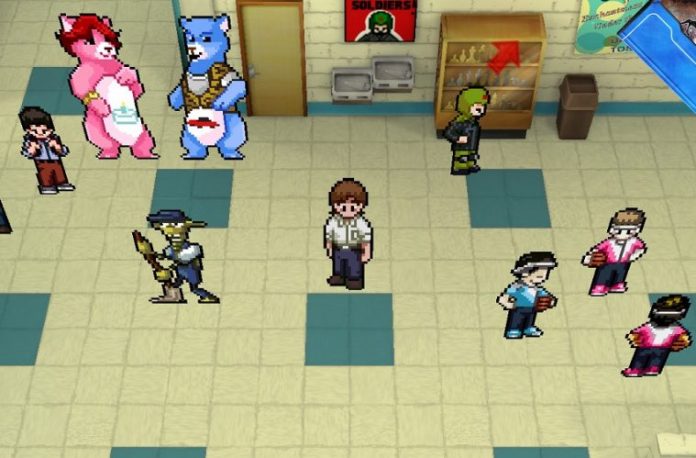 With the hundreds upon hundreds of RPGs on the market, it can be tough for one to stand out from the crowd.

Saturday Morning RPG from developer Mighty Rabbit Studios is inspired by 1980s Saturday morning cartoons. In many ways, it’s a creative twist on the genre. In other ways, it falls flat and will only serve to remind players of many other RPGs that have come before it.

Saturday Morning RPG follows the adventures of Martin “Marty” Hall, an average high school student. One day, in a strange dream world, Marty’s love interest Samantha is kidnapped by the evil Commander Hood. After taking on Hood unarmed, Marty is defeated, but just when you think that all hope is lost, a mysterious wizard wearing shorts grants Marty an ancient power – a notebook. With the magic notebook, Marty can turn anything it touches into a powerful weapon to use against his foes. Everyday items like bubblegum and basketballs become lethal aids against Hood’s minions. 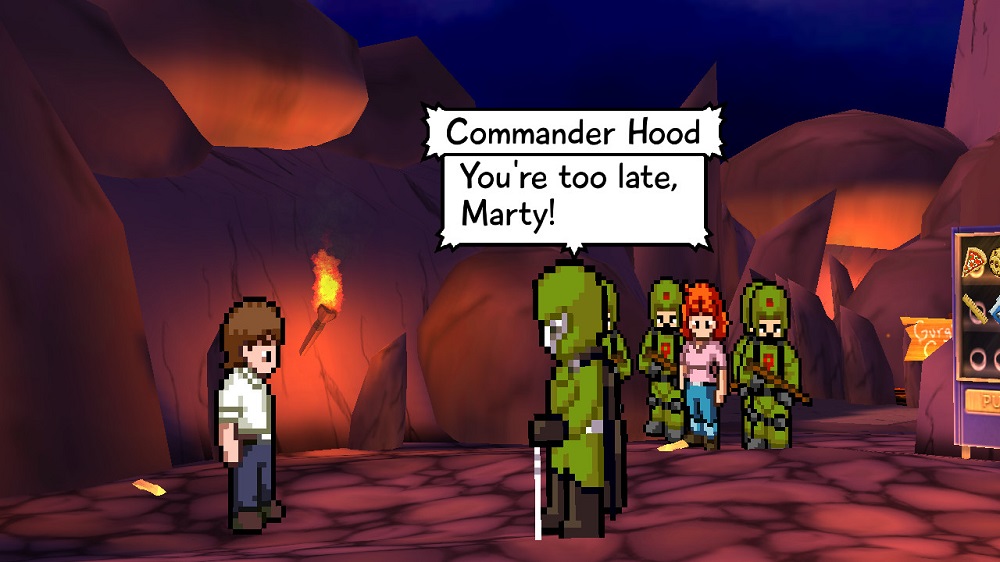 Players follow Marty on his adventures over five episodes that are all slightly different from one another. Episode four, titled Ho Ho Hood, is a completely Christmas-themed episode. It takes on a very How the Grinch Stole Christmas vibe when Commander Hood steals all the  presents from Marty’s hometown, leaving Marty to get them back and save Christmas!

Along with its five episodes, Saturday Morning RPG also features Endless and Arena modes. In Endless Mode, Marty takes on waves of enemies for as long as he can. In Arena, you’ll take on multiple enemies at once, but among the group are special enemies including a Commander Hood Goliath. The Goliath is (spoilers) just a really big regular Hood Soldier. Saturday Morning RPG has a lot of content to take advantage of, but after only a couple of hours I found the gameplay got pretty repetitive. 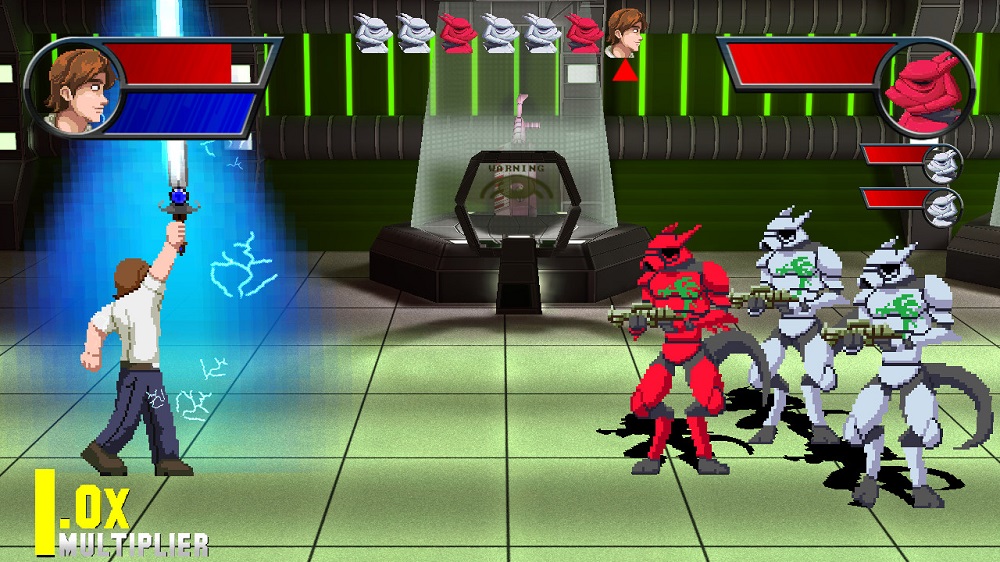 Each battle you come across in Saturday Morning RPG is set up in mostly the same way. Marty has a health and magic bar as well as three fighting options. The first is his melee option. Melee does little damage to the enemy, but doesn’t take up any magic. The second is his special abilities. These do significantly more damage to the enemy, but there are only two or three of each available for each battle. His third ability is a powerup. Marty can use these powerups to make his attacks more powerful, but each time he does it will drain his magic bar.

When it is the enemy’s turn, Marty will take damage, but the player has the ability to defend against all attacks. It’s important to learn enemy attack patterns,  because the better you time your defence, the less damage you’ll take.

Apart from the occasional mini-boss, most fights feel pretty similar to each other. I fought countless Hood Soldiers and green lizard men during the first episode, and each one fell in the same predictable way. Of course, there are different abilities that you can collect to change up the battles and the storylines are different for each episode, but at some point you’re likely to get tired of hitting that A button over and over again. 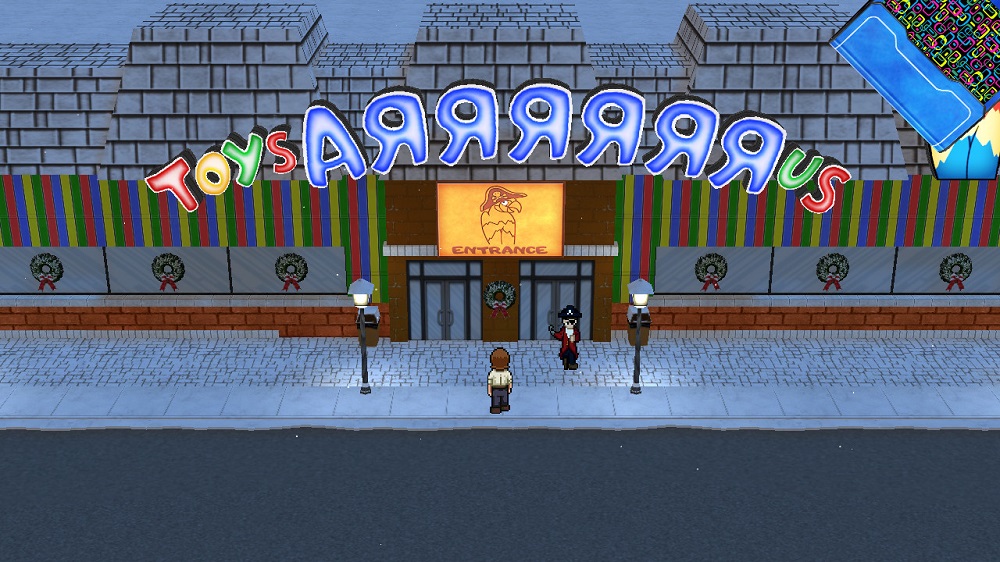 Despite its repetitive qualities, Saturday Morning RPG did keep me entertained for quite a few hours. I got a kick out of all of the 80s references, and the dialogue was witty and well-written. There are definitely a few laugh out loud moments to be enjoyed. I’m also a huge fan of pixel art, and Saturday Morning RPG’s style is  fun, bright and creative. Probably the best part of the package, though, is the soundtrack. Packed with 80s-sounding tunes, it’s exciting and addictive.

All things considered, Mighty Rabbit should be proud of its  attempt to change up the RPG genre. The number of 80s references alone will make the game worthwhile for many players. It’s just a shame that gameplay quickly gets repetitive; with a bit more variety, Saturday Morning RPG could have been a stand-out title. As it is, the writing will keep you chuckling for a few hours and the soundtrack will keep you tapping your foot, but don’t expect the enjoyment from Saturday Morning RPG to last much more than, well, a Saturday morning.

Saturday Morning RPG is available on PC, PS4, Xbox One and Switch. We reviewed the Nintendo Switch version.