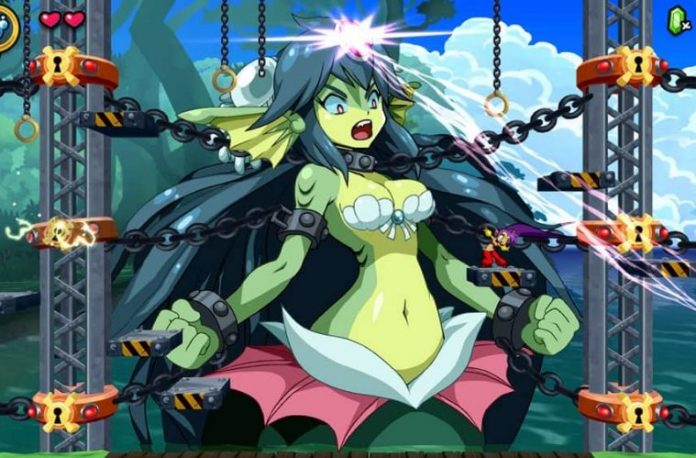 There’s something charming about the Shantae series.

Action platformer Shantae started out life on the Game Boy Color back in 2002. Since then, it’s seen four more entries to the series and has built an audience of longtime fans. So strong a following, in fact, that developer WayForward was able to successfully crowdfund Shantae’s fourth instalment, Half Genie Hero. Now, a year and a half after its original release, the game has got a shiny new re-release; Shantae: Half-Genie Hero Ultimate Edition, which includes all DLC as as well as some brand new content.

Out of the bottle

Instead of acting as a sequel to the third game, Shantae and the Pirate’s Curse, Half-Genie Hero decides to reintroduce the world to Shantae, although thankfully without the need of giving her a new origin story. The game opens just as Shantae is called to action; a faint voice warns her of an agent of darkness that will threaten the magical Genie Realm. And so, our adventure begins.

Like most other games in the series, Half-Genie Hero takes its time to tell a story. It often delves into lengthy dialogue scenes that help contextualise the grand adventure of the game. It’s rare that a platformer cares so much about story, so it’s disappointing that more of it isn’t voiced. But Half-Genie Hero is charming enough that it doesn’t ever feel too monotonous. 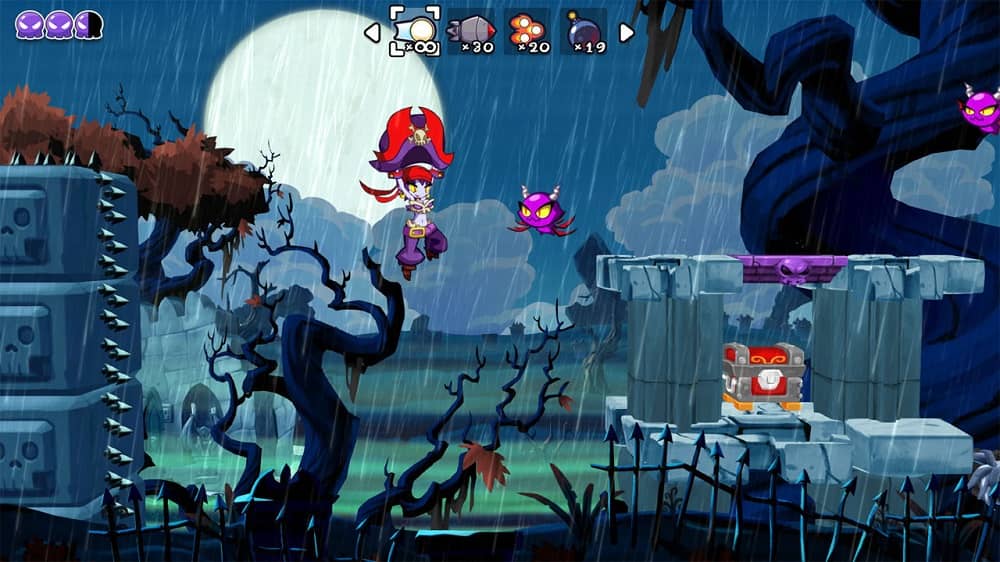 The game’s gorgeous visuals certainly help Half-Genie Hero feel so fun. Characters move so fluidly that I often found myself staring at the animations themselves. Whether it was the way Shantae happily bounces step after step, or just the way an NPC’s hat bounces in their idle animation, every inch of the game moves with the same motion of a well-produced Saturday morning cartoon. One of the better-looking 2.5D games out there, Half-Genie Hero is a testament of what can be done with modern technology.

The most important piece of the puzzle in Half-Genie Hero is Shantae’s controls, which feel as good as ever. Able to turn on a dime, both on the ground and in the air, I always felt completely in control. Able to attack enemies with the whip of Shantae’s hair, Half-Genie Hero feels like a combination of Castlevania’s whip mechanics and Megaman’s level design. It’s high praise alright, but it unfortunately falls short of the legendary status of either. Still, Shantae: Half Genie-Hero is able to hold its own thanks to its own set of interesting mechanics.

Namely, Shantae’s transformation ability, in which she can perform a quick dance to turn into one of four different animals. Each one controls and behaves differently. Take the monkey, for instance; its able to run faster and jump higher than Shantae can normally, while also being able to cling onto walls. It’s clear that certain portions of the game are designed with Shantae’s different transformations in mind. The second level contains a platforming-intensive that relies heavily on the monkey’s abilities. What’s cool is that the game often offers alternative routes through levels that can be accessed once you’ve unlocked different transformations, emphasising level exploration and replayability. 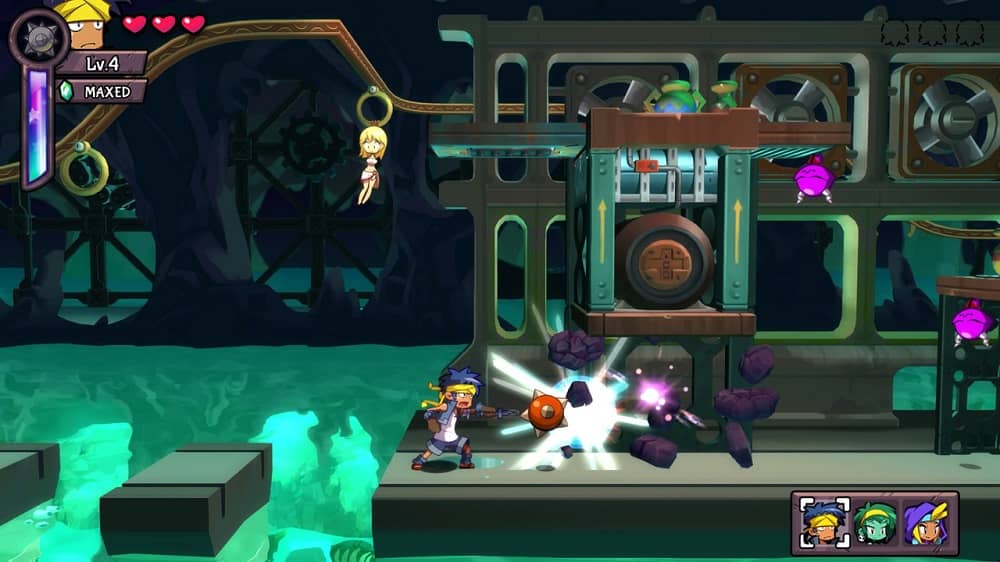 Better than a magic carpet ride

Shantae: Half-Genie Hero carries a hefty amount of imitation, borrowing ideas from nearly every classic platformer franchise. Early on, I was worried it wouldn’t be anything more than a throwback to games like Sonic the Hedgehog, Mario, and Megaman, but thankfully, Half-Genie Hero often changes things up. A level might feel immediately familiar for its first half, only to turn itself upside down by introducing something completely new. One particular sequence had me grabbing onto conveyor belts in a factory, jumping from platform to platform, only to suddenly turn into a downhill slide in the second half, having me jumping over barrels and gaps.

Where Shante: Half-Genie Hero‘s myriad of ideas come together is in the game’s many imaginative boss battles. Mermaid queens, giant insects, or even a magic silkworm-infused air force captain; each one is as wacky as you’d expect from the Shantae universe. They’re also quite challenging, often forcing you to think on your toes. The aforementioned mermaid queen, for instance, is a two-part boss battle. The first has you destroy the queen’s restraints by climbing towers as she tries to attack you with lasers. Then, once she’s free, you’ll have to scale more towers to attack the gem on her head while dodging lightning bolts and her massive mermaid tale. It speaks to the game’s balance of a sweet and charming tone with a deep and interesting approach towards its level design. 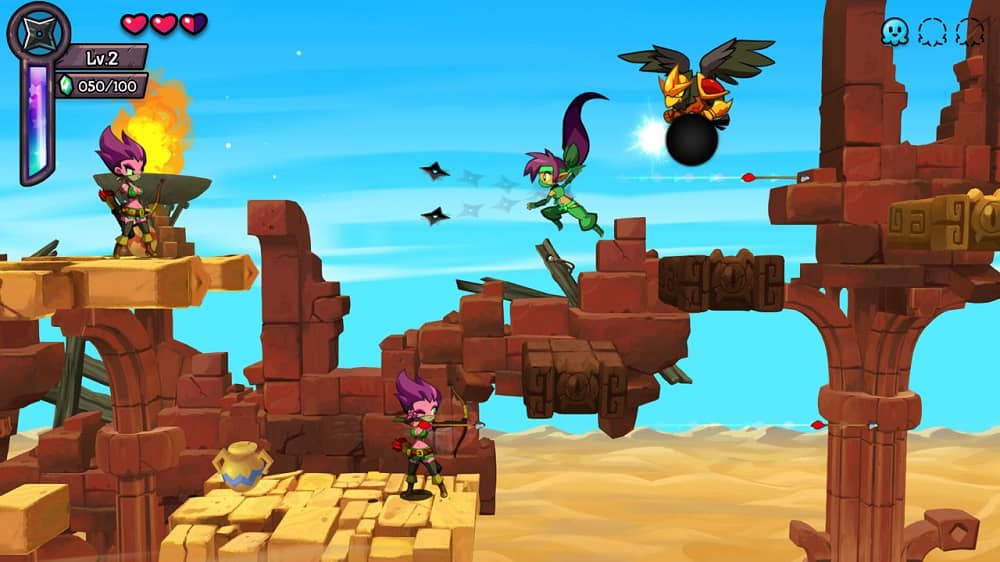 For as much as I love Half-Genie Hero, its premium price might be too much of a hurdle to overcome. It’s all too easy to say that £39.99 is simply too much to ask for an action platformer these days; especially when the original version is already down to a cheap £15.99. However, there’s plenty of content included to help soften the blow, and a heavy emphasis on replayability means even the most hardcore fans will have lots to do. With multiple characters, bonus “hero” and “hardcore” modes, it’s an investment that’s easily justified as far as I’m concerned.

While not good enough to overtake the games that inspired it, Shantae: Half-Genie Hero is a remarkable action platformer that does plenty to make a name for itself. A series whose grand return was welcomed with open arms, the Ultimate Edition is only more of a good thing. Although its dialogue might be a bit laborious to get through at times and its price tag a bit hefty, Shantae: Half-Genie Hero – Ultimate Edition is without a doubt one of the best platformers out on a modern-day console.

Shantae: Half Genie Hero – Ultimate Edition is available on PC, PS4, Xbox One and Nintendo Switch. We reviewed the PS4 version.