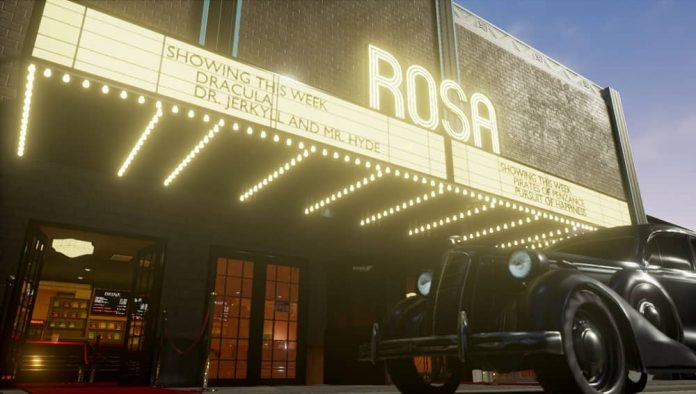 My love of the film Cinema Paradiso piqued my interest in The Cinema Rosa, an upcoming exploration game based around a fictional cinema, set to release on PC next year.

The Cinema Rosa plays classics. We’re talking 1931’s Dracula, and 1935’s A Midsummer Night’s Dream. I’ve recently been getting into classic cinema (as best as you can with streaming services), so the game’s entire aesthetic based around a cinema caught my eye. Set to release sometime in 2019, I’ve been lucky enough to play a short minute demo of The Cinema Rosa. The full game is set to let you u explore this dilapidated cinema in full, and repair rooms to enter memories of a relationship you once had. The demo I played only gave me s a small sample of what’s to come, letting me explore three rooms of the cinema, but it left me wanting more.

Exploring The Cinema Rosa during this thundery night added to its ambience, and developer Atreyu Games uses public domain material to show in rooms of the cinema. I received a reel of film from a memory and put it into a projector to play Seeing London from 1918. The Cinema Rosa‘s demo offered around 15-20 minutes worth of gameplay, but I sat there and watched all 14 minutes of Seeing London. Once you get into an auditorium at the Cinema Rosa, you get to watch another short clip – I think it’s Love Affair from 1939.

More clips from public domain movies will be welcome in the full release of The Cinema Rosa. Its main issue for me was how unclear it was on what I was supposed to do. I didn’t know I could pick things up; some objects are highlighted and some aren’t, so I was confused that non-highlighted objects on the floor were what I needed to pick up. Eventually I figured out that any object you interact with that’s greeted with “something is missing” will need another item combined with it to progress at some point. Hopefully this issue with highlighting is something that will be long gone come the final release of the game.

The Cinema Rosa is still about a year away, so we have a long way to go but hopefully it’ll be worth the wait; I am genuinely looking forward to a longer, more polished version of what the demo has to offer.

For more information about The Cinema Rosa, visit the game’s IndieDB page.