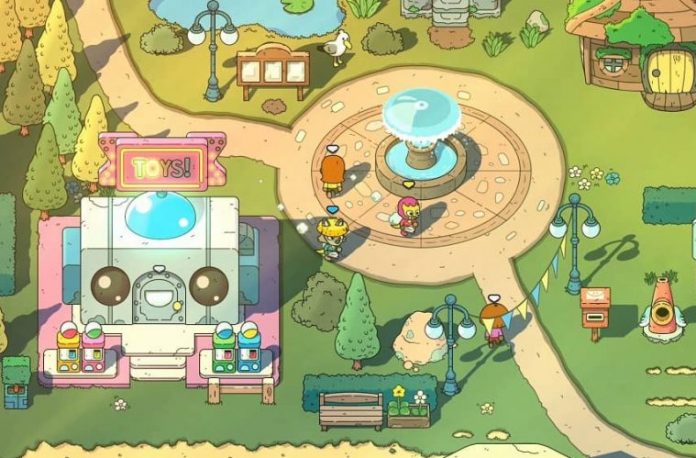 It’s a game I’ve been looking forward to for several months. A Zelda-lite RPG with a gorgeous 2D cartoon art style? Say no more, I’m there. Everything about The Swords of Ditto’s style oozes charm. From your randomised character – boy, girl, robot, fox, dog, you name it – to the beautifully drawn town, houses and dungeons, this is a game designed with a hell of a lot of love. As such, I wanted to spend as much time as possible, soaking it all in. Like with any adventure game of this ilk, I like to explore all the nooks and crannies. I’ll intend to meet all the townsfolk, complete all the side quests, and eke as much enjoyment out of the game as I can. Unfortunately, The Swords of Ditto didn’t quite want me to play like that.

You see, in The Swords of Ditto, you’re on a time limit. Legend has it, on the island of Ditto, the evil Mormo raises once every 100 years. A hero – the Sword (that’s you!) – is chosen from the villagers. They’ll be tasked in gathering enough strength to defeat the threat and bring peace to Ditto. But the Sword only has a few days to prepare – and if they fail? Well, they die. And another 100 years go by until the next Sword is chosen, while Ditto perishes under the dark threat of Mormo. 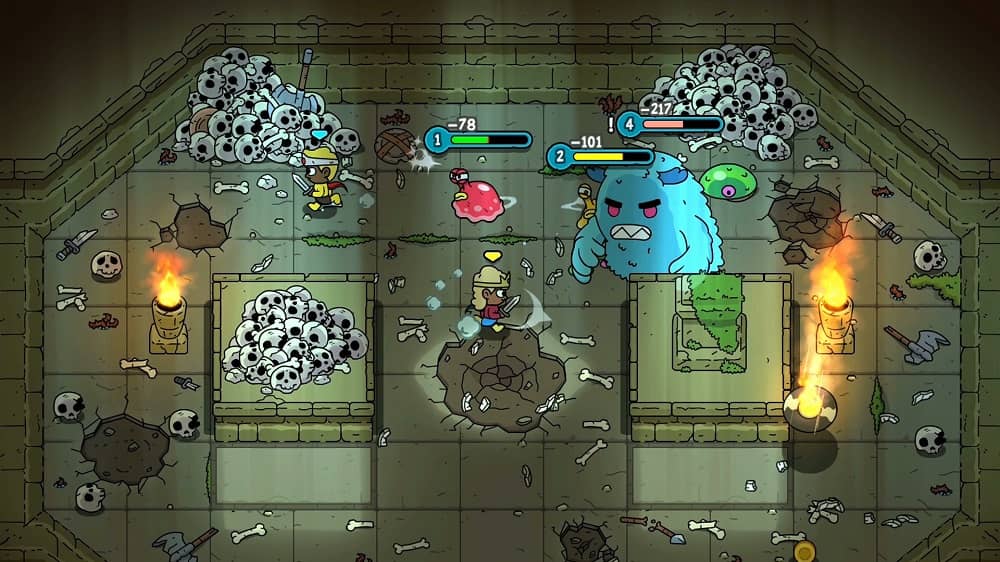 How long you get depends on what difficulty you choose. Regular difficulty gives you four days to prepare, while the easiest level gives you seven. I didn’t try the hardest difficulty because I’m not a psycho. Preparation means exploring the island, completing dungeons, finding items and upgrades, and generally levelling up your character. But – and this is a big but – Swords of Ditto is a little like a roguelike, so when you die, that’s it.

Well, almost. You’ll start again with a new character, but you’ll keep your level, and any coins your previous character had. Your items, weapons – known as “toys” in Ditto – and any upgrades you had (“stickers”) will be lost, unless you buy them back with celestial shards, a type of in-game currency. Any progress you make in dungeons will be lost, too. Everything is optional, but some dungeons will grant you new toys, and two of them, known as “anchors”, will make the final showdown with Mormo easier if completed.

No walk in the park

I played The Swords of Ditto originally on normal difficulty. At first, it was fine. As I levelled up though, so did the enemies, so I never felt like I was getting stronger. It didn’t take long for it to feel like every time I found a new toy or sticker to make me a little bit more powerful, I’d die soon after. Health doesn’t regenerate either, so you need to keep a constant stock of food items to replenish it.

The more often I died, the harder the game got. I’d keep my level (so enemies would too), but without having a store of money or decent items, I’d have very little chance of progression. I tried skipping ahead straight to the fight against Mormo, but I couldn’t even make it through the final dungeon thanks to my lack of items. After several hours of trying – and failing – to progress through the same dungeons again and again, I’d had enough. I deleted my save and started again. 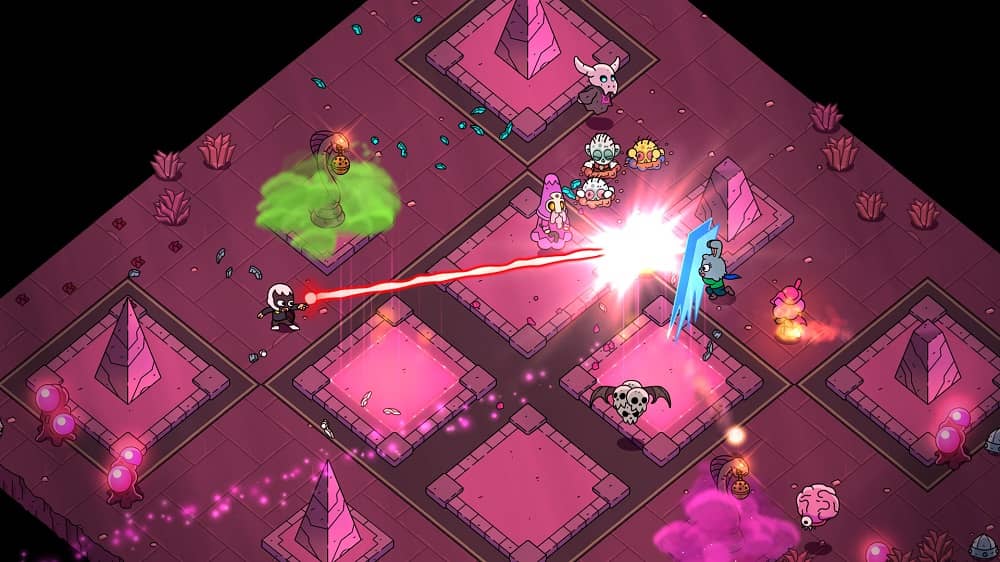 With a fresh start – this time on the easiest difficulty – I fared much better. I was able to make my way through dungeons, make enough money to buy plenty of items, and gathered enough cool toys to feel like a true badass. All seven days given to me were used to me to uncover all of the map, complete side quests, and battle my way through as many dungeons as I stumbled across. I got to the final boss without so much as a scratch. Without dying once, I defeated Mormo once and for all. Ditto was freed from its evil curse!

Except it wasn’t. The game fast-forwarded 100 years, putting me in a new protagonist’s shoes. Even though Ditto had enjoyed 100 years of peace, Mormo was back and the whole cycle began again. Just like every other time I’d died, I kept my level, but my equipment was nowhere to be found. This time I didn’t even get the option to buy any of it back. I’d effectively completed the game, but it felt like the game had deleted my progress. Well, damn.

It turns out there is a way to lift the curse in The Swords of Ditto, which I suppose is the ending of the game, but it doesn’t offer up much information on how to do that. It wants you to play through, again and again, essentially completing the same dungeons and doing the same tasks multiple times over. Sure, areas are randomly generated, so it’s never exactly the same, but I just don’t know if The Swords of Ditto has quite enough there to draw you back after you’ve beat Mormo once. 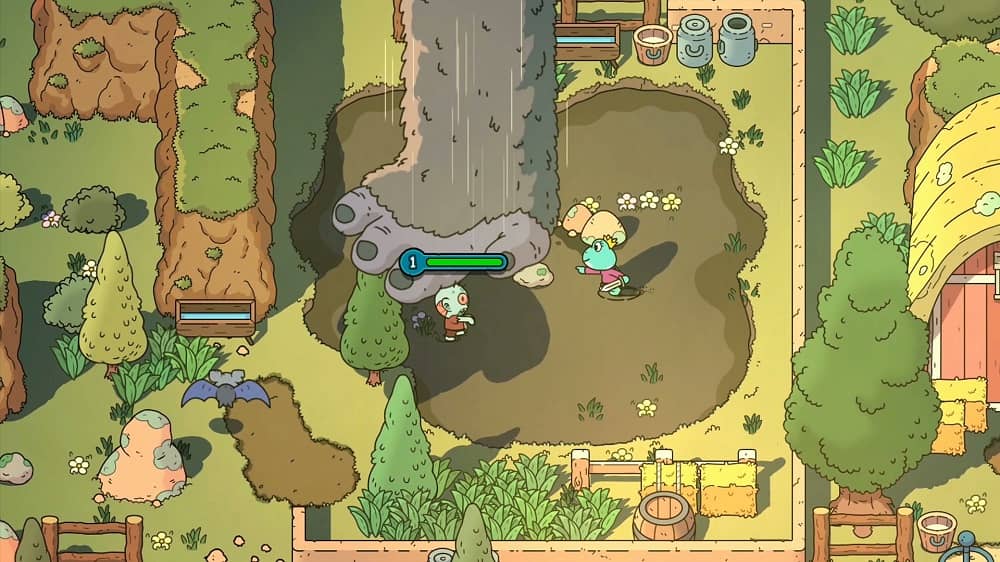 There’s so much I like about The Swords of Ditto, which makes it even more of a shame that one game design decision can make it such a frustrating experience. Saying that, I do like that the game’s minimal narrative is woven well into the game design. It makes a nice change for the hero’s journey to feel fraught and against the clock, rather than a princess sitting patiently in a dungeon somewhere while you prat about catching some villager’s chickens. In that sense, the permadeath works well too; it’s a cool touch that every time you awake as a new hero, 100 years have passed and Ditto feels more perilous and run-down than the time before. But that narrative weave comes at the expense of your patience and enjoyment.

My enjoyment of The Swords of Ditto may have been strongly impacted, but I did still enjoy it. It’s hard not to – it’s such a pleasure to look at, with a gorgeous hand-drawn art style that instantly draws you in. It’s filled with glorious old-school RPG elements that are timelessly enjoyable; dungeons with puzzles, basic but engaging combat, cool boss designs. There really is so much to love. It’s just a shame it ends up outstaying its welcome by having you repeat yourself time and time again. But I will be back to Ditto. All said and done, its charm will still draw me in.

The Swords of Ditto is available on PC and PS4. We reviewed the PS4 version.