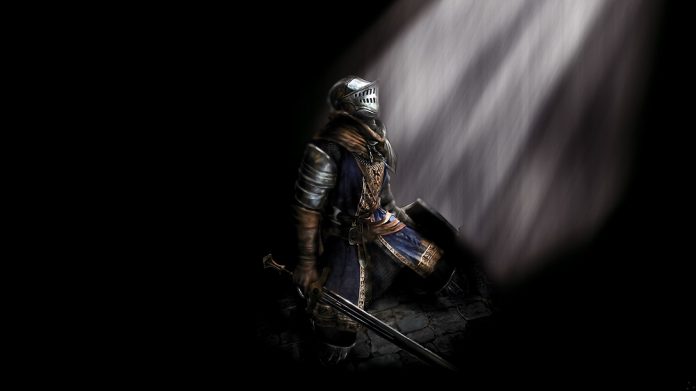 The original Dark Souls has recently been re-released on Xbox One and PS4 in the form of Dark Souls Remastered. Our ex-contributor Ed Thorn is a huge FromSoftware fan and has loved the series from the start – I mean, his Twitter handle is @FromEdward, what more proof do you need? These are his words from back in 2015 as to why you really ought to play Dark Souls.

This article was originally published in July 2015.

Poignant, striking piano echoes in the background as I attempt to manoeuvre around my opponent. I dart between his attempted swipes and wait patiently for a flicker of an opening to strike. Twenty minutes later and I’ve finally whittled him down for the first time to a sliver of health. I realise at this moment that my hands are desperately clawing for the controller as cold sweat meets plastic. He lunges aggressively towards me as I quickly retreat with a back-step followed by a sudden jab to the chest. He side-steps but I’ve done it. I find my heart rate is beating at an alarming rate, and my eyes are practically holding the screen in place as the music stops and the most welcome cut scene in the history of my gaming life appears before me.

This fight happened several months ago and I can still recall it vividly today. No other game has placed so much pressure on me in a given situation as Dark Souls. Of course the pressure was entirely voluntary; I didn’t need to place myself in the situation at all – hell, I didn’t even need to play the game. At first this was my mindset; Dark Souls is touted as one of the most difficult games of its time, after all. It certainly lived up to expectations as I navigated the world and stumbled a copious number of times into my own demise.

Why bother with something so frustrating?

I cautiously entered the white mist (an indication of the suffering you are about to endure) and tentatively walked along an eerily quiet bridge. I’d learnt by that stage that Dark Souls is an opportunistic puppet master who takes advantage of your mental state and acts accordingly. In this case, I was fairly suspicious and expected something to happen. Well, it certainly did. An overbearing, giant of a monster leapt onto the bridge with suitably sized club in hand ready to make my gaming experience even more challenging. It stopped for a fraction of a second to pity my low-level, shoddily dressed character before it decided to run straight at me. At this point I blubbed like a baby and screamed for mercy before it mercilessly bludgeoned me to death in a couple of swipes. I died over and over again, to the point where I just gave up with the game.

Another part of me obviously thought differently. I brushed the dust off my controller (after almost a month), inhaled and exhaled deeply, before telling myself that I had to make the most of my £7.

Dark Souls had slithered its way under my skin, and I couldn’t handle its constant jabs and jibes. However, I found that if I withheld the urge to “have fun” and drew on my competitive nature I could think clearly about how best to approach the situation. As I progressed through the game I began to learn to take advantage of the environment you are presented with. I paid attention to my enemies’ movements and, above all, I learned to be patient. With patience I could learn from my mistakes, assess the situation so that next time I could confidently stroll into the white mist. In addition I realised that every time I died it was due to a fault of my own.

The very fact that Dark Souls gets under your skin is not a defect, but rather the reason why you continue to play. It’s utterly absorbing as you traverse often breathtaking environments which the game constantly keeps fresh, as it seamlessly blends together the world in such a way that it never seems confusing. Fortresses, forests, sewers, catacombs and countless other locations including the beautiful Anor Londo all bring forth a unique sense of dread, but also a sense of wonder as you never know what loot or enemy lurks around the next corner.

You aren’t entirely alone as you’ll encounter merchants and other intriguing characters throughout the game. They’ll offer a brief but valuable conversation regarding their story or experience. You may encounter the same character more than once in the game and begin to grow fond of their presence and what they have to say. Sometimes they may even offer you assistance and their storyline will begin to develop alongside yours. It’s these brief moments that strengthen the connection you have with the game world; the sense that there are some friendly faces may raise a smile or urge you to push forward and find out more about them.

Each boss encounter is thrilling and terrifying. Often, boss encounters in other games aren’t particularly “scary”. Sure, they’ll provide more of a challenge, but they rarely leave a lasting memory. Dark Souls is different. I can recall every boss encounter along with a set of painful memories to accompany them. What makes each boss so special is the sheer craftsmanship that has been painstakingly poured into their design; even the environments they dwell in are perfectly tailored to make the fight challenging. Some may give you ample room to move, while others feel claustrophobic or assert a sense of unease as you avoid traps and pitfalls. No fight ever feels the same as each encounter has an air of unpredictability. Bosses may have multiple phases and reveal an unwelcome surprise just as you begin to feel more confident.

In addition there is no hand-holding. No glowing orb where a weakness may lie and definitely no tool-tips appearing on screen if you’ve died over 50 times. This adds a true sense of responsibility in terms of trying different tactics, targeting different areas, scouring your environment desperately for any hidden tricks. Lastly, it allows for an unprecedented level of accomplishment when you finally conquer the monster that has stood in your way for hours, or even weeks on end.

One mustn’t forget the music underlying the whole experience. Motoi Sakuraba has done an incredible job with a host of elegant and haunting pieces, followed by punchy, strong orchestral scores which each add magnitude and urgency to the situation you find yourself in. Reaching the final boss encounter and hearing the music for the first time was utterly breathtaking. It almost feels out of place for the situation, but at the same time it encompasses the unforgettably tragic tone of the game itself.

Without giving anything away, each character has a deep engrossing back story that once explored may bring a tear to the eye.

Fun begins to seep back into the game once you treat Dark Souls as an extreme challenge requiring physical and mental fortitude of the highest order. The sheer mouthwatering surge of achievement you experience having conquered a tough encounter is something you won’t find in any other game. Even once the it’s complete, you still have more opportunities to relive the game on a higher difficulty. And trust me, you will want to play it again, to employ new strategies, explore secret areas and alternative story lines you may have missed, or to just seek the sense of achievement one more time.

My advice to you: go out and buy Dark Souls, stick with it and become enveloped in a rich RPG masterpiece.