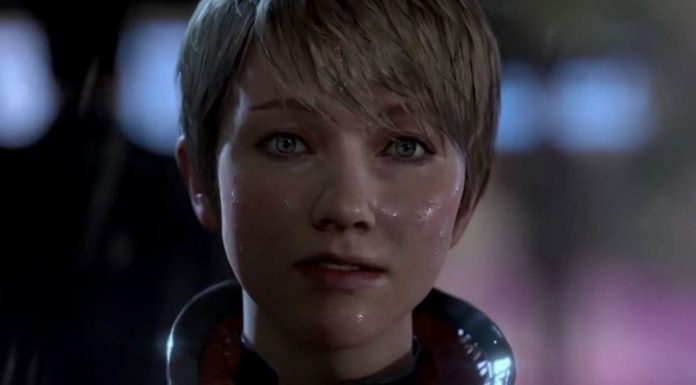 I’m not one to talk in-depth about politics.

If politics are brought up in conversation, I’m usually nodding and listening, but on the inside I’m incredibly confused and drowning out what’s being said with internal screaming. But due to what’s happening lately in my home country, the U.S, and the political climate being how it is (a burning dumpster fire), I’ve found myself paying much more attention to things. Things that are not necessarily just related to politics, but things that I definitely should’ve taken note of before roughly the first fourth of my life was over.

Issues like civil rights, law and order, and family roles are examples of what I mean. My point – and I do have one – is that I think I’ve started paying more attention. When I watch television or movies or I play video games, I feel like I’m more in tune to the wider themes touched upon. I’ll find myself thinking, “wow, what a powerful message,” or “that was insensitive”. One game I’ve been playing recently, Detroit: Become Human, sent those red flags up in my brain over and over again.

Have you ever had a friend that, no matter how many times you tell them that something is bad for them (like a bad boyfriend/girlfriend or that third shot of tequila or maybe just that first shot of tequila) they never seem to listen? Well, sometimes they need a good beating to finally get the message through. A really bad break up or a really bad hangover is exactly what they need. And that’s kind of what I found with Detroit.

I love my fellow GameSpew writer Chris. He’s probably one of the funniest people I know, and definitely one of the most talented writers. So when I read his review of Detroit: Become Human, I laughed a lot. He made valid points, mentioning that its deeper themes were obvious and ham-handed. And I agree, but I believe there’s something to be said about this. On the one hand, Detroit does spell everything out. The title of the game could have been “Slavery is Bad, mmkay?” and most people would have played it, and at the end agreed that yes, slavery is bad, we should not enslave people, why is there a game about this? 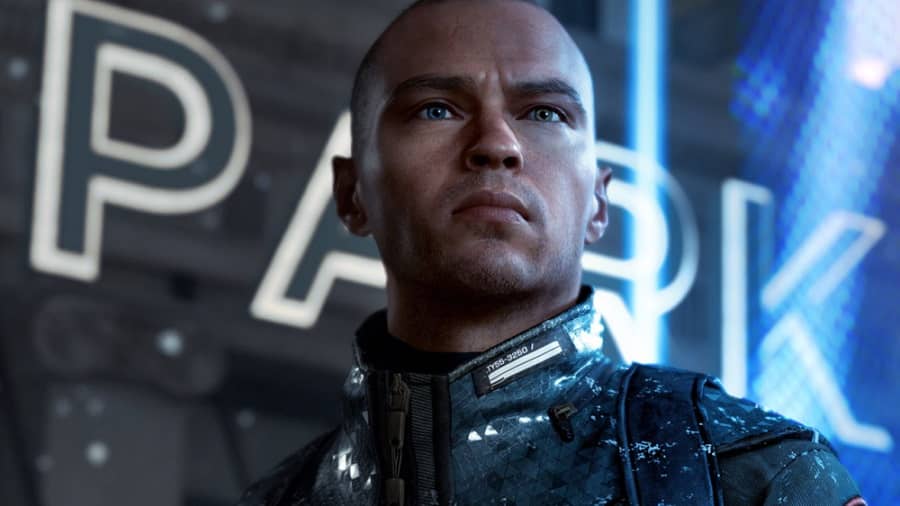 But then on the other hand, there’s our tequila-drinking, bad relationship-having friend who will finish the game and say, “I wonder why they picked that title. It must be subjective.”

Sometimes you just have to spell things out. Spend one hour at Wal-Mart watching people price check items despite there being a giant sign displaying the price right under where they picked up said item and you’ll understand what I’m talking about. So yes, the themes in Detroit: Become Human are laid out on a silver platter for its players, but it did nothing, at least for me, to take away from my enjoyment of the game. Even though Chris found the overt references to Martin Luther King Jr. and segregation to be crass, I thought that they were well placed, and allowed players a clear reference to the past. History is known to repeat itself after all, and Detroit: Become Human is an example of a very probable future. Markus’ story may have been the least satisfying of the game’s three main protagonists, but it was laced with valid points, relevant themes, and powerful messages.

Not only does Detroit cover political issues like slavery and civil rights, but it also touches, briefly but significantly, on the environment. Throughout the game players are able to pick up magazines laying around. These magazines cover news articles from  2038, the year the game is based. Quantic Dream clearly did its research, and that becomes more evident the more magazines you pick up and read. 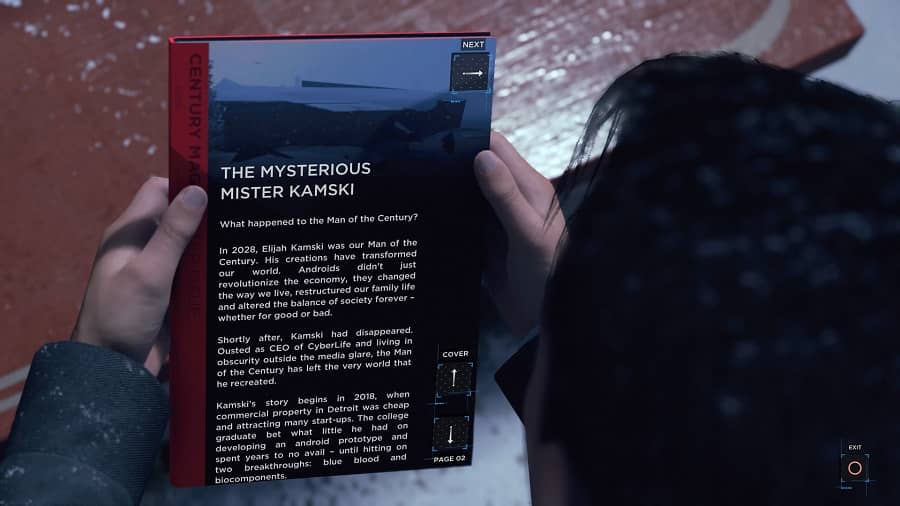 One particular magazine talks about zoos with exhibits that house android replicas of animals that have become extinct. The polar bear and the tiger are only some of the examples used – animals today that are extremely endangered and are likely to be wiped out in real life by 2038. You even hear people, when walking through crowds in the game, talk about the zoo exhibits saying things like, “I’m not sure an android polar bear is as exciting as a real one, but I’d love to see one up close!” Another issue covered the extinction of bees. A very serious issue today as well. The magazines question just how long humanity can survive without such valuable creatures.

I won’t go on yelling about how accurate these articles are and how likely they are to happen within our lifetime, but the main point is that Detroit: Become Human made a bold choice to cover some pretty sensitive topics. Topics that people shrug off and ignore until it becomes a real problem. I found it refreshing that Quantic decided that these issues were valid and important enough to be included in the game.

But Who Am I Really?

What I was left with when I finished Detroit: Become Human was a feeling of relief. Not because I was happy it was finally over – much like I imagine Chris felt (heh heh) – but because I felt as though each of my characters was finally free. I was happy with how my story ended up for Markus and Connor, not so much Kara who’s finale for me was a bit sad, but I was relieved for each of them. This probably all sounds strange, but hear me out. 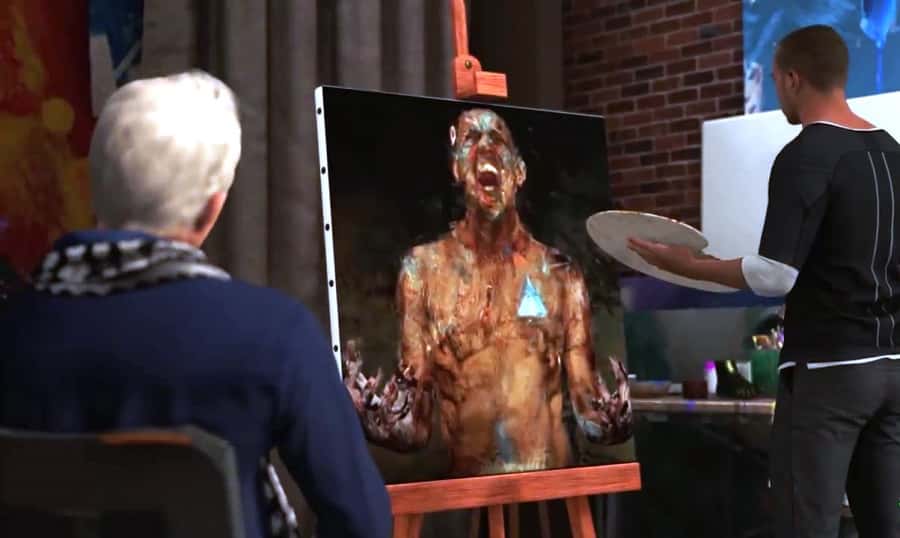 Markus’ entire storyline focuses on the idea of existentialism. As it does for Connor and Kara eventually as well. At first, Markus is complacent in his job, taking care of Carl, a talented elderly artist who respects and treats Markus like a real person. After unfair circumstances, Markus is separated from Carl and is forced to decide for himself the person that he wants to be – or rather who you want him to be. And that’s the underlying issue of the entire game. Are these androids really alive? Are they people that deserve the same civil rights and justices that humans do? It’s a big question, and you’re the one answering it.

After embarking out on his own, Markus encounters other deviants (the word used to describe androids that have broken their “robotic” laws and run away) living in hiding, not knowing what to do or how to live without humans ordering them around. As Markus, you’re able to take a leadership position and show the androids what it’s like to have that true freedom and to be able to make their own choices. Some will want to move forward with violence and others will want to remain pacifists, and Markus is the best android to lead them. He has reason to hate humans, for unjustly tearing him away from his old life, but at the same time, he knows what it means to have a human really love and respect him. In the beginning, I felt that Markus’ relationship with Carl would make him an unlikely leader for the deviant revolution, but actually, he was the perfect choice. He has seen both sides of the issue and, as the one controlling him, you’re able to decide what that means for him and his people.

Who are they? Runaway slaves who wish to have their own rights? Abused individuals begging for an escape from their oppressor? Mothers, fathers, sisters, brothers, friends, enemies. Being able to decide it for them, and get even a glimpse of what it’s like to completely have to rediscover yourself, is powerful and downright brilliant.

Detroit: Become Human isn’t perfect. In fact, there’s some football field-sized holes in its plot that you may have to jump over to see what’s on the other side, but they really are holes worth jumping over. The deeper meanings and themes found within the story are obvious, maybe a bit too ham-fisted at times, but when you look past its faults, there’s a really solid foundation underneath. Heavy Rain has been my favourite Quantic Dream game for years, but Detroit: Become Human has knocked it down to second place for the relevancy of the arguments made within it and the powerful messages it is trying to address.

As cool as it is, though, still no flying cars. What is up with that?