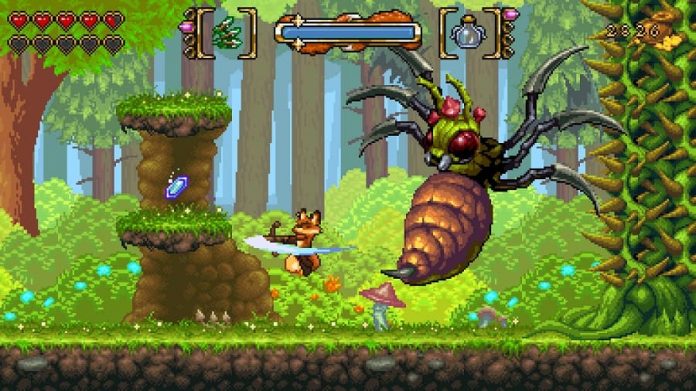 I feel sorry for kids these days; they just don’t appreciate how much games have advanced in the last 20 years or so.

If you’re a gamer in your thirties you probably grew up playing fine creations such as Shinobi, Chuck Rock, Ghouls ‘n Ghosts and Boogerman, just like me. Platform games that were challenging and that had charm. Going back to them today is a hard pill to swallow though. Now they just seem downright unfair, and perhaps even a little bit rubbish. That’s why I’m glad that games like Fox n Forests exist. Just released on PS4, Xbox One, Nintendo Switch and PC, it keeps the spirit of old 16-bit platformers alive while also throwing in some modern quality of life features.

Barking up the wrong tree

In Fox n Forests you unsurprisingly play as fox. Rick is his name. And guess what? You have to explore forests. You see, a great tree has lost its bark, and for recovering it you’ve been promised treasure. Rick is also hopeful that he’ll get to eat the bird that somehow got him involved in his tree-rescuing quest, but that’s just because he’s greedy. Suffice to say, you’re not likely to care much about Fox n Forests‘ story. But it doesn’t matter; its gameplay is what carries the adventure.

Like many a platform game, Fox n Forests has you making your way through a number of worlds – or seasons, as they’re called here. Each season has a couple of levels for you to complete before you face off against a boss. There are also some bonus levels thrown in for good measure that you have to unlock. Simply defeating the boss of a season isn’t enough to unlock the next, however; you also need to find a number of hidden seeds. 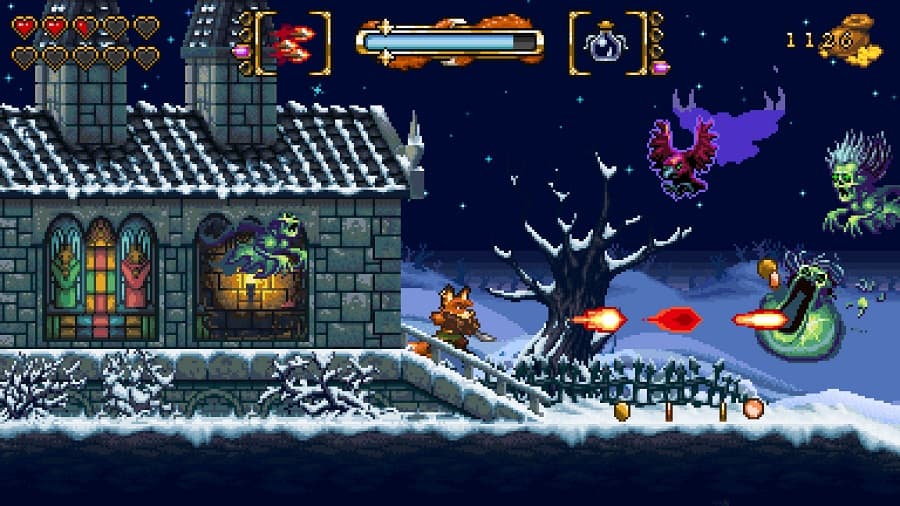 Each and every one of Fox n Forests‘ levels promotes exploration. Like those found in a Sonic The Hedgehog game, they’re multi-layered, with different routes to take to reach the end. To find seeds you’ll need to follow your instincts; jumping onto platforms that seem otherwise redundant, or going out of your way to reach a secluded area. Sometimes seeds may be inaccessible until you’ve expanded Rick’s repertoire of abilities, too. Starting out with some basic bow and knife attacks, by visiting the game’s hub you can spend gold to buy new abilities. You’ll also pick up some new arrow varieties as you recover pieces of bark.

You’ll often find yourself revisiting levels you’ve already completed in order to discover new collectables and secrets. In fact, sometimes you might have to in order to progress. Shooting colour-coded targets with the respective arrows opens up new routes, and quite often you’ll discover the seeds, bottles and grindstones required to progress through the game and develop your abilities. It can get a little tiresome if you have to play through a level multiple times to find all that you need, but it’s rarely an issue.

Another string in Fox n Forests‘ bow is Rick’s nifty ability to momentarily change the season. Is there a large stream halting your progress (apparently foxes can’t swim)? Simply change the season and you may find that it has frozen over. Likewise, if there’s a gap that’s just too cavernous to jump across, changing the season may cause leaves to fall which you can use as temporary platforms. Changing seasons drains Rick’s mana meter though, which is also depleted by using certain bow attacks and magic. Thankfully the mana meter can be extended, just like Rick’s health bar. 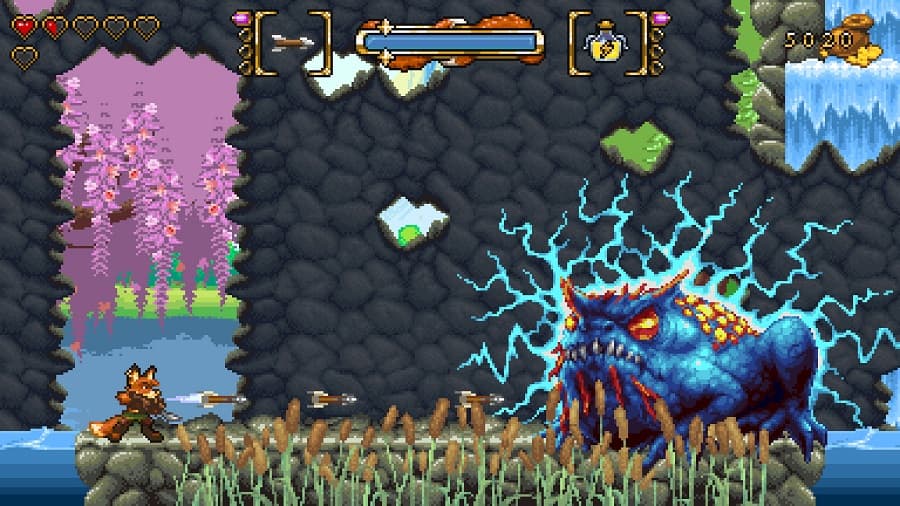 What I really like about Fox n Forests, apart from its precise controls and charming visuals, is the fact that it’s inclusive. It has difficulty levels that actually vary the challenge between being welcomingly light to crushingly tough. Additionally, while its levels are pretty expansive, you can create checkpoints in them by paying a small amount of gold. Whether you’re looking for a game that will test your abilities or provide some light adventure, Fox n Forests fits the bill.

While Fox n Forests is never going to be remembered as a classic, it’s certainly just as good, if not better, than many of the platformers of yesteryear that people cling to with rose-tinted glasses. Its story is passable, and you won’t ever really care about its characters, but its gameplay hits all the right notes to conjure up nostalgia while also feeling modern and fresh. Whether you’re young or old, Fox n Forests is a platform game to sit down with and simply enjoy for the sake of playing.

Fox n Forests is available on PS4, Xbox One, Nintendo Switch and PC. We reviewed the Xbox One version.