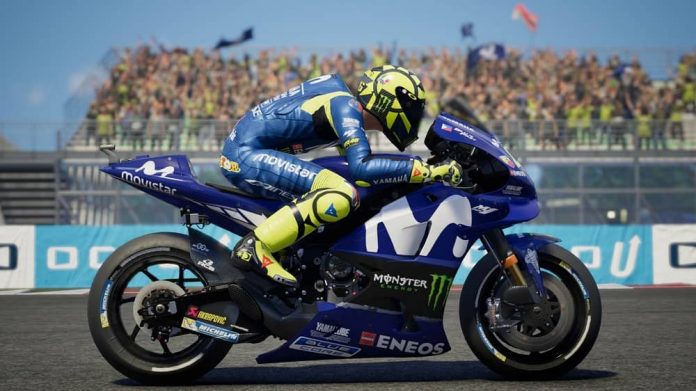 The MotoGP racing series is to the motorcycle world what Formula One is to auto racing. The games that license the racing series’ name, however, have never quite lived up to its standard.

Like most yearly-released franchise, MotoGP struggles to provide substantial improvements with each iteration. What’s here is undeniably one of the most solid-performing motorcycle racers on the market, but it’s more to do with a lack of competition that the series is so ubiquitous, rather than having a great track record. At the end of the day, small tweaks help justify its existence outright, but it never comes together in the way motorcycle racing fans deserve.

On its own, the content offerings in MotoGP 18 don’t disappoint. There’s about everything a motorcycle racing enthusiast would hope for. There are 19 tracks, drone scanned to reflect their real-world counterparts, as well as a staggering 100+ riders from every level of the MotoGP world. For any fan, there’s little that can top playing as your favourite motorcycle racer as you try to shave seconds off your lap time at one of the famous tracks like the Silverstone Circuit. With time trials, grand prix, and championship modes all available from the gate, there’s plenty to enjoy, but it’s hard to appreciate a game for doing the bare minimum. Where MotoGP 18 impresses is in its career mode, which is what players will most likely be spending most of their time with before jumping into online races.

For what it’s worth, the career mode packs quite a punch. Allowing you to create your own character, a first for the series, the customisation options aren’t very deep. Forcing you to choose from a selection of pre-made faces, I wasn’t very enthralled with what was on display. However, taking my rider from humble beginnings in the Amateur Circuit all the way through Moto3, Moto2, and finally to MotoGP was a satisfying ladder to climb. Once you enter Moto3 and officially enter the semi-pro world, you’ll be able to join a racing team. Doing so will require that you stay within their standings. Perform well and you’ll continue to earn certain benefits from the team. Do poorly, however, and you’ll be kicked off their roster. It added a layer to the career mode that I found really enjoyable thinking beyond just each individual race. 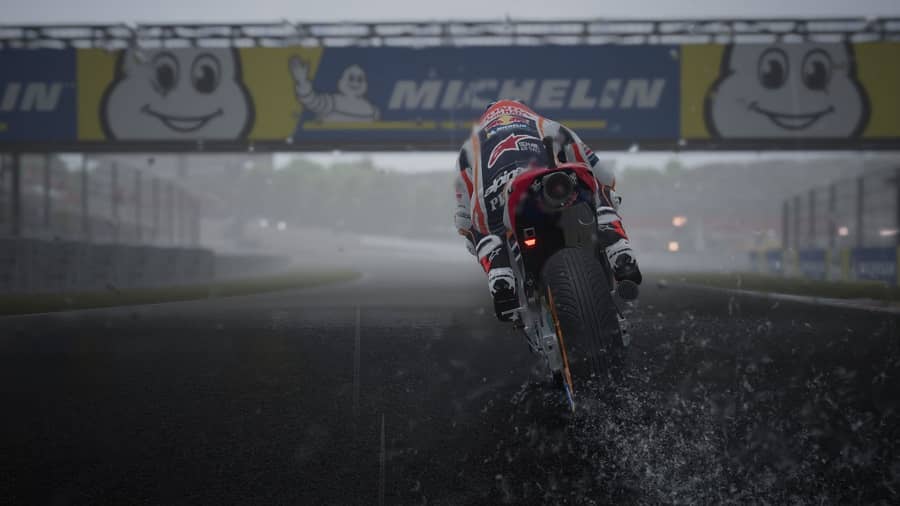 You also have the option to fine-tune your bike through a skill tree, changing your engine, brakes, suspension, frame, and aerodynamics – though I didn’t have as much freedom as I had wished. Instead of being able to actually swap out parts, you’re only allowed to spend points accrued throughout your career on different levels of abilities, like upgrading your brakes’ modularity or aggression, for instance. It’s a bit more detached than I’d hoped, but still offers a way to progress beyond winning races. Your rider also has various specific attributes that level up over time, like throttle management and riding position, though these do so automatically and don’t make their changes very clear.

Of course, where MotoGP 18 will live or die is by its controls which I’ve come to adore. Like its predecessor, MotoGP 17, 18 seems to have adopted the control system from Milestone’s other racer, Ride 2. I’d argue that everything feels a bit too same-y, but it works too well for me to even complain. With the ability to change your rider’s riding style between five methods used by real racers, all of which react differently with the game’s physics engine, there’s some impressive nuance involved to the mechanics that will keep any hardcore fan happy.

The game’s physics also impact the race tracks themselves with the game’s weather system. Everything from dry races, wet tracks, and even nighttime all impact the game’s physics systems in some way. While the differences in a wet and dry race seem a bit obvious at the onset, Night races lack the sun’s constant warming of the track, making subtle changes to the way tyres grip and slide across it. 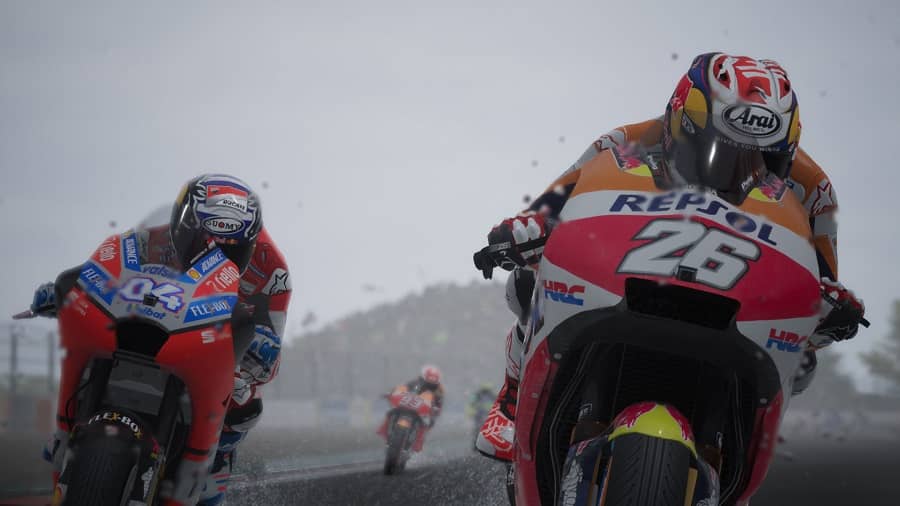 Being able to bank into a corner early, leaning in at the apex of a turn, only to gradually straighten back out feels physical. A connection between the motorcycle and the body of the rider that you simply don’t find in other motorsport racers where drivers are encased in the metal of a car. In MotoGP 18, Milestone has yet again created a racer that captures the essence of what motorcycle racing is all about. It’s why its so frustrating to see them stop short, seemingly content with recreating last year’s game with a few new added benefits.

MotoGP 18 is a game that hardcore fans will most likely enjoy. Its impressive handling mechanics and physics systems will surely support a lifetime of online play. The MotoGP ID addition, that tracks your progress across every mode in the game, also acts nicely for those who’d like to boast of their prowess in the track. Yet, despite its serviceable content offerings I can’t help but feel let down. Visually identical to its predecessor, the additions made in this outing are more like scrapings than noticeable steps forward. With Ride 3 just around the bend most casual fans might be better off waiting. Anyone returning to the perennial racer may not be able to help but have a sense of déjà vu.

MotoGP 18 is available on PC, Xbox One and PS4. We reviewed the Xbox One version.