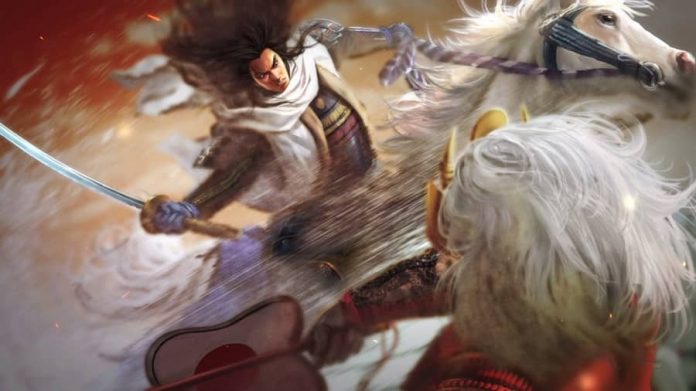 The historical strategy series Nobunaga’s Ambition is as storied as the man it takes its name from – in the world of video games, at least.

For many outside of the game’s core fanbase, Koei Tecmo’s flagship strategy game is equal parts beloved and intimidating. It seems the game’s latest iteration, Nobunaga’s Ambition: Taishi is meant to address these concerns while keeping the series’ trademark depth and complexity for its hardcore fans. A tough juggling act, to be sure. Impressively, the game seems to have pulled it off even if it stumbles a bit on the way there.

For the uninitiated, Nobunaga’s Ambition: Taishi takes place in the Sengoku period of Japanese history. It’s a time where power was delegated from the Emperor to Japan’s Shogun that, in a sense, turned it into a military dictatorship. A time marred by social upheaval and constant war between clans, you take the role of one of these clans and are tasked with conquering half of Japan.

At the beginning of the game, you’re offered several different scenarios to choose from, all  surrounding different time periods within the Sengoku era. Since the period stretches nearly 200 years, the scenario you choose will determine which clans and characters are available to play. Along with running your clan, you’ll be forced to deal with nearly every aspect of leadership from the time period including commerce, diplomacy, military management, trading, and infrastructure upkeep. It’s a game filled to the brim in the sort of complexities that make it feel more sim-like than strategy, which has always been the series greatest strength and biggest detraction. 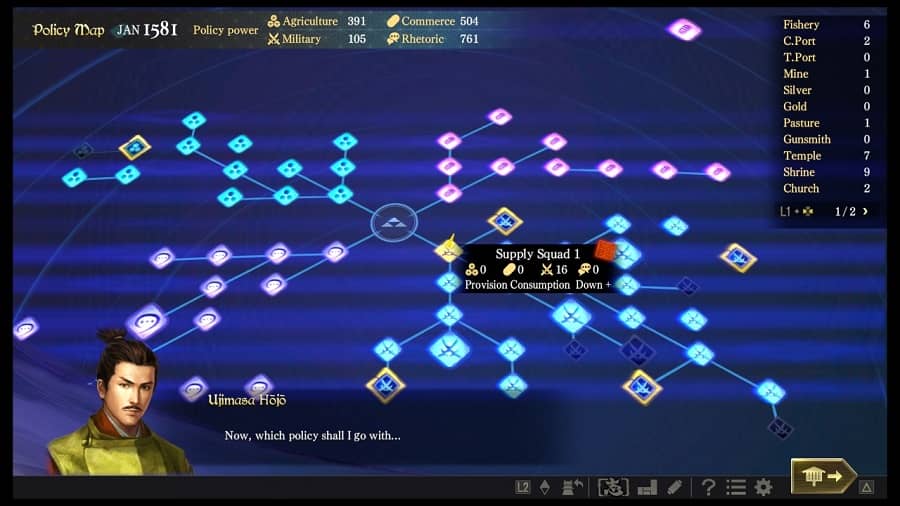 Although the series has always offered a wealth of depth and complexity for hardcore fans to explore, these elements have also kept casual fans, even those interested in the subject matter, at arm’s length. It seems Koei Tecmo is aware of this, and have implemented a number of changes to try and court those who would be too intimidated by the game to give it a try. Its hard to tell if these concessions are enough for Nobunaga’s Ambition to break out of its own mould, nor if these same changes are conservative enough to keep longtime fans pleased. What’s here, though, is a balance of the two that feels as cosy as Goldilocks’ soup.

For starters, Nobunaga’s Ambition: Taishi is much more measured in its introduction of systems to the player, trying not to overwhelm them from the outset. With so many things going on, the numerous informative tutorials are helpful, explaining things step-by-step in many cases. Although it’s a dull slog for most of it, those who are invested enough into the game will put in the effort, but be warned: this isn’t a game you can get the hang of in one sitting.

The improvements go beyond just that, of course. Certain systems from previous games, like the personal territory management, have been streamlined. For instance, the personal territory management system from Nobunaga’s Ambition: Sphere of Influence – Ascension has been revamped, now giving you complete control over the land of your clan instead of just a personal part of it. While the previous system provided an added layer of complexity, Taishi loses some of its monotony in favour of integrating it into the clan management experience at large. 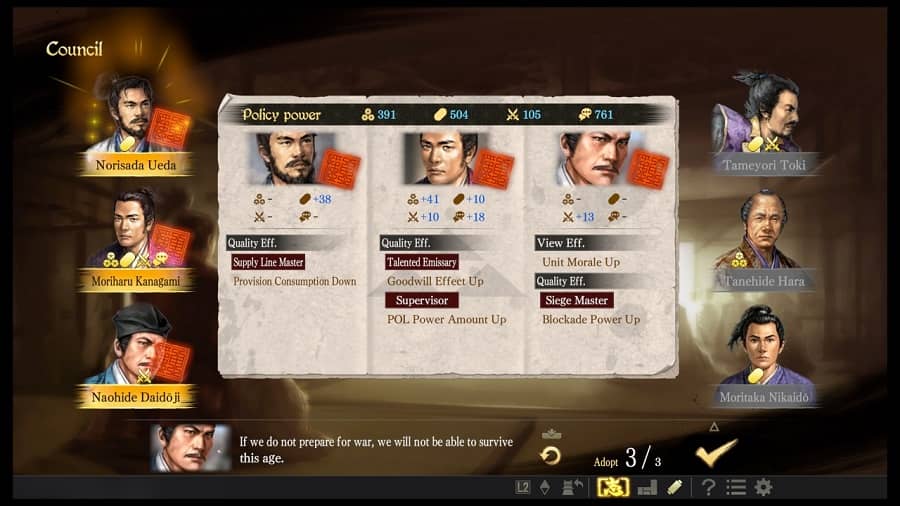 In the game itself, there’s a lot of new additions and features that going into them all would feel more like a game wiki than a review. There are still numerous complicated elements here despite Koei Tecmo’s best efforts to make things easier for newcomers. Just one branch of the game, like its commerce system, extends into seemingly hundreds of different pathways to take into account. The less labyrinthine aspects of the game, like the new council meeting system that has you meeting with your advisors every month, help to further streamline aspects of past game without fully removing the added depth.

It’s here that I’m most impressed with Nobunaga’s Ambition: Taishi. It proves itself competent enough to criticise its own self-complicated nature, while still offering what’s always been the series biggest appeal: a brilliant tapestry of game systems, all intertwining and working together to create a more believable and deepening experience. For all the things I could say about the specifics of Taishi’s changes, what’s most important is that you’ll still need to think five, ten, or fifteen steps ahead with nearly every turn. Taking men to build your army will pull from either the farmers or refugees of your clan, and both have adverse effects on your clan’s output in different ways. It’s these interlocking systems that are the heart of Nobunaga’s Ambition: Taishi, and they still shines throughout every minute with the game. 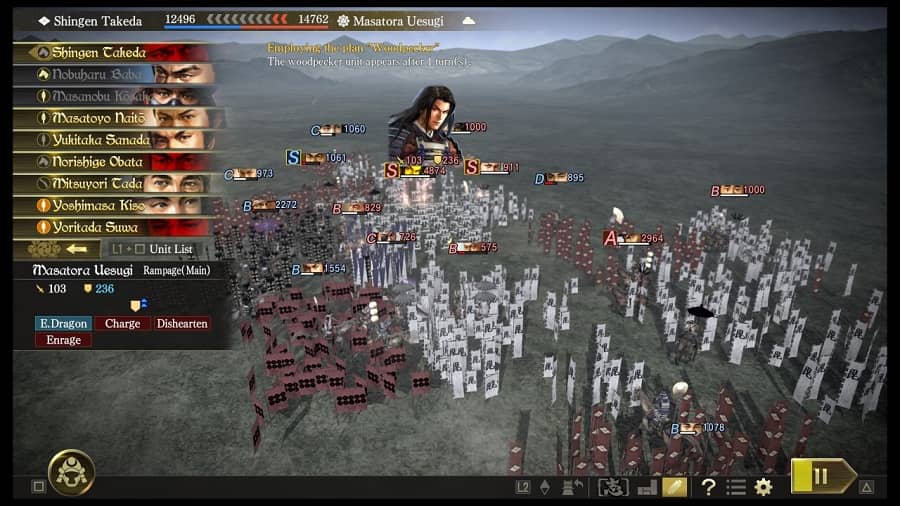 Of course, one of the most important aspects of Nobunaga’s Ambition: Taishi is undoubtedly its combat. Instead of fighting in real time, the game breaks up its combat into stages where you’re allowed to create different battleplans. It means battles usually take a long time to fight, and frustratingly the game lacks the siege mechanic that was one of the previous iteration’s most defining features. Though the new moral system, which acts almost like a stagger for your entire army, does link itself back to the day-to-day clan management systems of the rest of the game, it’s not enough to save Taishi‘s disappointingly dull combat.

For a series that’s been around for as long as Nobunaga’s Ambition has, its surprising to see these games still made with so much care. Other similarly prestigious titles have gone through their own rollercoasters of excitement and disappointment, yet it’s rare to find an outlier among this series. The changes made to Taishi aren’t perfect, and it’s a shame that combat has suffered as a result, but overall it’s a valiant attempt to make the game more accessible to a wider base of players. Nobunaga’s Ambition: Taishi is a game that feels like a more approachable version of what’s come before, both for returning players and new ones alike.

Nobunaga’s Ambition: Taishi is available on PC and PS4. We reviewed the PC version.