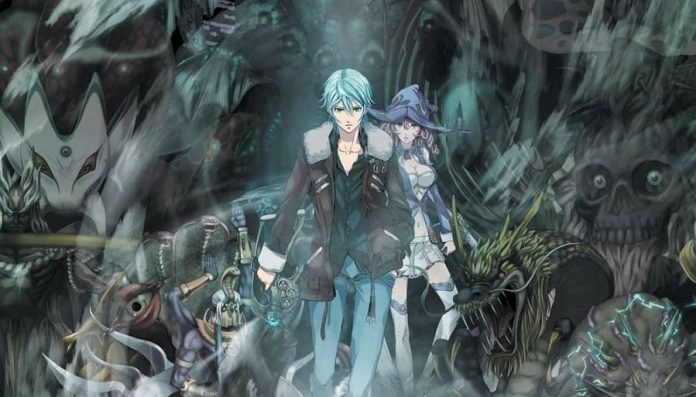 Telling the story of a paranormal journalist caught between a battle of angels against demons, The Lost Child is a dungeon crawler that could only be a product of Japan.

You’re Hiyato Ibuki, a journalist for LOST magazine, a publication that deals with ghostly happenings, reports of the occult and other otherworldly goings-on. Whether you actually believe in any of that is up to you, but you do your due diligence and investigate the leads that your editor sets up for you. One particular story takes you to an underground train station. Apparently, there’s been an influx of people jumping onto the track – or, according to witnesses, being pushed. You think it’s nonsense, until you’re down there yourself and end up getting flung onto the track by some ungodly presence.

Thankfully, you’re saved by a mysterious woman, who pulls you to safety, hands you a locked-up case, and disappears into a bustling crowd. It’s here where things get really weird. Confronted by an angel, Lua, it turns out that there’s a battle between heaven and hell – and somehow you’re caught in the middle of it. From here, The Lost Child’s gameplay begins, and a mixture of dungeon-crawling, storytelling, and battling and capturing demons ensues.

In all honesty, the story of The Lost Child isn’t remarkable in any way. It’s not terrible by any means, but I could have taken or left it. It serves a purpose to move the story along, and that’s fine enough. It’s the gameplay that really captures your attention in The Lost Child. An old-school first-person 3D dungeon crawler, it has you solving switch puzzles, battling an onslaught of hellish beasts, finding your way through labyrinthine dungeons – or ‘layers’, as they’re known in the game – and facing up against fiendish bosses. It’s repetitive, but it has plenty of hooks to keep you entertained.

My favourite of The Lost Child’s quirks is its demon capturing system. You see, that mysterious case you were handed at the beginning of the game contains something called the Gangour; a powerful weapon that can capture and trap demons. Once captured, you can purify demons and add them to your party to fight alongside you. It’s almost Pokémon-esque in design. That age-old quest to ‘catch ‘em all’ kept me happily trawling through every last square of each dungeon in the hope of coming up against an enemy I’d not fought before so I could capture something new. 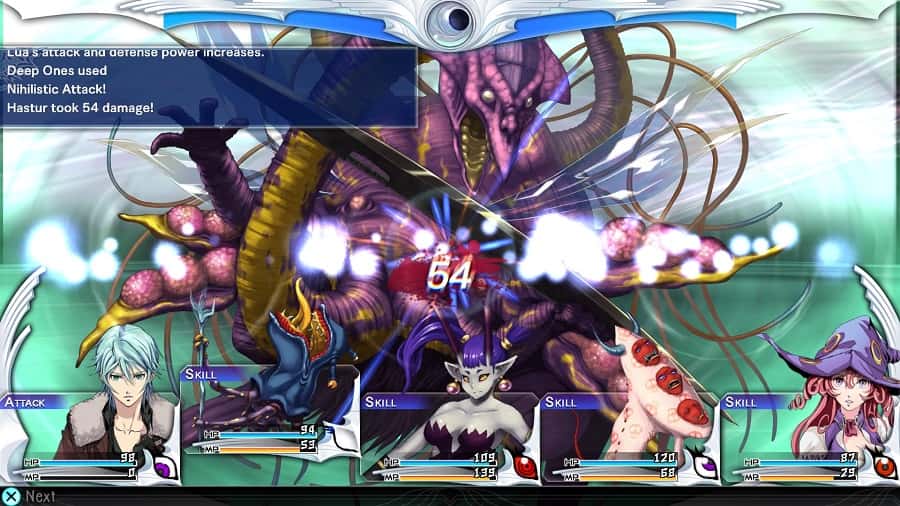 Every demon you capture has an individual elemental power and set of skills. The ability to switch out your party at your will means you can continually customise your party in order to find the right balance of skills that works for you. While you can’t switch out their equipment like you can your two main party members, Hiyato and Lua – more on that later – you can level them up as you progress, making each stronger overall.

Before you can capture a demon though, you’ve got to engage in battle with it. Battles are a fairly standard turn-based affair. You’ll instruct each member of your team at once, then when you’re done, each action will play out automatically. You’ve got standard attacks, skills and items to use, and of course Hiyato can use his Gangour to do a large amount of damage and ultimately capture a demon. The Gangour has a burst gauge, so the fuller it is, the more damage it’ll inflict. Let the gauge get too full, though, and it’ll reset to zero, leaving you unable to use it for a few turns. As such, even if there are no demons to capture, it pays to use the Gangour regularly; even if it’s just to inflict a large amount of damage on one enemy. 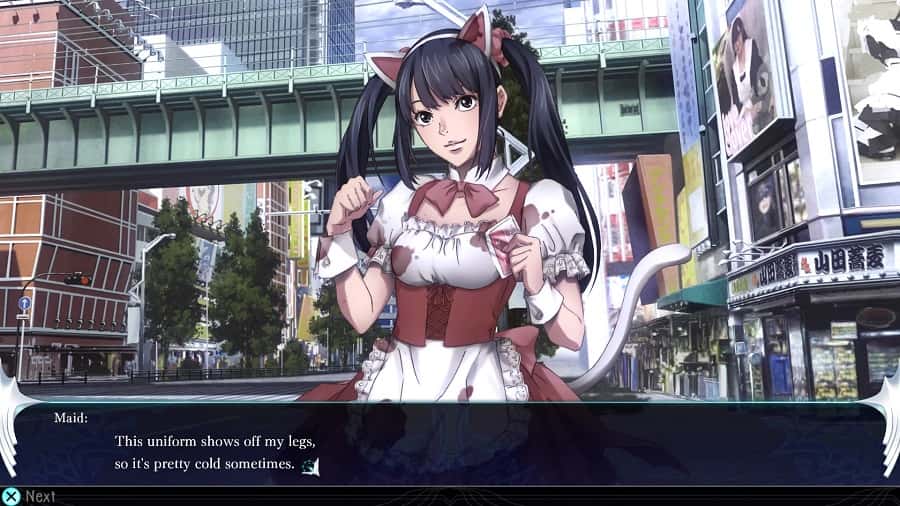 No self-respecting dungeon crawler would be complete without loot, and thankfully The Lost Child has its fair share. As you explore and fight against enemies, you’ll find chests, all of which contain items and equipment. Some items have no use and simply hold a monetary value for you to sell. Others can be equipped to either Hiyato and Lua in order to improve their stats. Finding equipment isn’t as common as I’d like it to be – this ain’t loot on the level of Diablo – but it’s still rewarding when you find a better piece of body armour or weapon to equip to either character.

Too hard, too easy

Perhaps my biggest bugbear with The Lost Child is its erratic difficulty. As default, the game is set to medium difficulty. Playing on this posed no real problem battling basic enemies through dungeons. In fact, it became a little too easy; no real strategy is required – simply instruct each member of your team to do a basic attack and the enemies will fall without doing any real damage. But, of course, the crux of each dungeon comes down to finding and defeating a boss. The bosses are much harder than the rest of the enemies, having a set of attacks that will undoubtedly wipe out members of your team in one swift move. The first time I died, I went back to crawl through the dungeon some more, and with some extra levels and a bit of extra experience, I managed to defeat the boss without too much trouble.

The second one, however, posed more of a challenge. I could have walked around the same dungeon a few times to gain extra experience, but fights with standard enemies are repetitive and boring. Turning the game down to easy difficulty, however, made the boss fall in no time. Their attacks barely made a dent. And normal enemies on easy difficulty? They don’t even seem to attack at all. It’s too easy. There’s no happy medium. 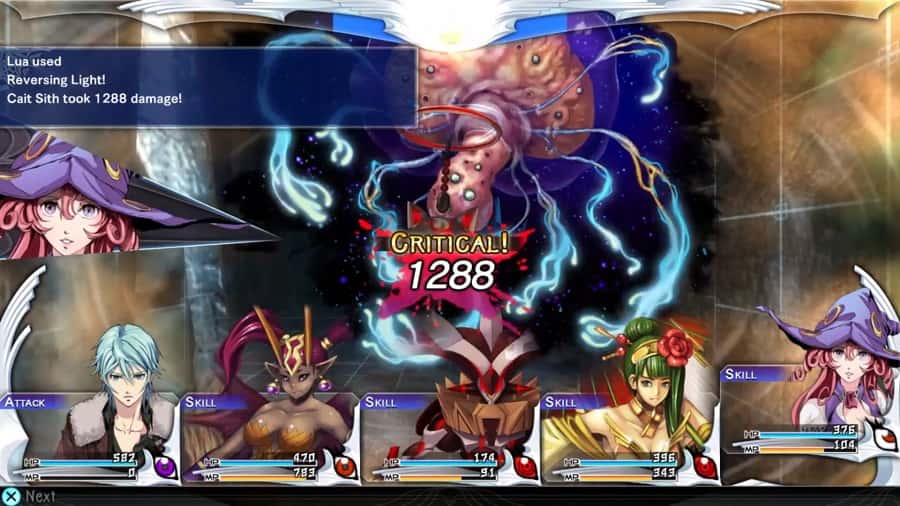 Outside of the dungeons, there’s a world map to explore, with your hub being the office of LOST magazine. There isn’t a great deal to do in the world, besides talk to a few people in order to instigate new investigations, and a couple of shops to visit and stock up on supplies. It’s all nicely presented though, with varied environments and pleasant hand-drawn art. The character and enemy designs are perhaps the real stars of the show, each varied and well detailed. Enemies are suitably grotesque, and coming across new ones to capture is always a delight. It’s just a shame that the visuals of the actual dungeons don’t quite match up to the rest of the game. The textures are pretty low quality in comparison, with little variety, leaving them feeling rather drab. It’s not exactly a dealbreaker, but it’s a shame.

Old-school dungeon crawlers aren’t all that common these days, so The Lost Child made for a refreshing experience. A little more depth – and better balanced difficulty – in the combat wouldn’t have gone amiss, though. But even as it is, The Lost Child is worth picking up. Whether its age-old tale of angels and demons does it for you is your call, but gameplay alone is enough to make this a worthwhile timesink. Now if you’ll excuse me, I’ve got more demons to go and capture.

The Lost Child is available on PS4, PS Vita and Switch. We reviewed the PS4 version. 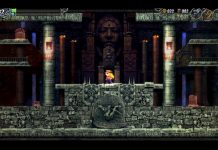