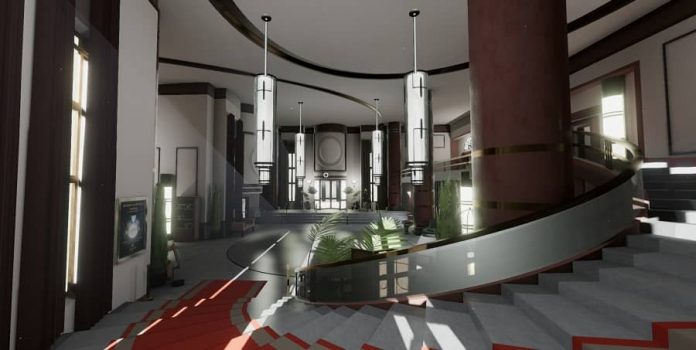 Set to release later this year, The Spectrum Retreat is a new take on the oft-trodden first person puzzle genre.

In the vein of Portal or QUBE, The Spectrum Retreat is a mysterious narrative-driven game that tasks you with solving a series of puzzles.

That’s not to say its puzzles are bad – far from it, in fact. But while most first-person puzzle games have a narrative that simply moves the game forward, here, it’s feels more centre stage. From the short demo I played, the game’s setting captured my attention from the moment I pressed start.

The demo took me through a series of puzzles known as ‘the authentication test’, and passing through a seemingly ordinary hotel room door transported me into a strange tunnel of test chambers. But turning around rather than passing through the door allowed me to explore parts of the hotel. It’s here where The Spectrum Retreat really grabbed my attention.

First, and perhaps most obviously, it looks beautiful. Set in an art deco-themed hotel, maze-like corridors are speckled with small details like wall art, bellboy trolleys and signs pointing you to the hotel’s facilities. The main lobby of the hotel greets you with a grand, sweeping staircase. Light bursts through gorgeous feature windows, casting patterns on the walls and floors ahead of you.

It’s instantly clear this isn’t any ordinary hotel, though. It’s empty and eerily quiet. The only being I came across was a mannequin-looking figure sat motionless behind a reception desk. There’s a number of audio logs dotted around, too, presumably to dig deeper into the game’s narrative. Ah, that old chestnut. I didn’t mind – from what I’ve seen so far, this is a narrative I’ll be keen to dig into further.

The puzzles of The Spectrum Retreat are engaging and challenging without being too obtuse. The ‘authentication test’ that the demo had me undertake tasked me with changing the colour of a number of light blocks in order to activate doorways and pathways to let me reach the exit. Each level has a series of blocks, each of which can be switched to either red or white. Switching the colour of the blocks operates colour-coded gateways – i.e. switching a white block to red will allow you to pass through white doorways, and vice versa. You can only ever have a certain number of each colour though, and as the puzzles progress they get much more complicated. They’re taxing, but very rewarding to complete. 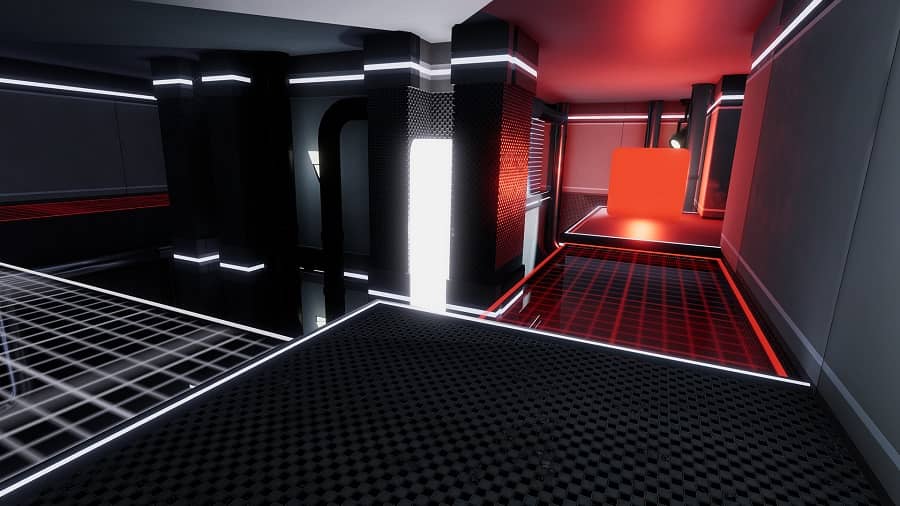 The demo was only a brief look at what The Spectrum Retreat has to offer, but suffice to say, my interest been sufficiently piqued by what I’ve seen. Taking into consideration the roots of the game, it makes it even more of an intriguing offer. Back in 2016, 18-year-old designer Dan Smith won the Young Game Designer BAFTA award for an early prototype of The Spectrum Retreat. Two years on, it’s been fully fleshed out and developed into something that can – hopefully – compete with some of the best in the genre. I’m very much looking forward to seeing the full fruit of such a young and promising talent.

There’s no solid release date for The Spectrum Retreat just yet, but it’s expected later this year. It’ll be coming to Steam, PS4, Xbox One and Nintendo Switch. If you’re a fan of first-person puzzle games then this is definitely one to keep on your radar.