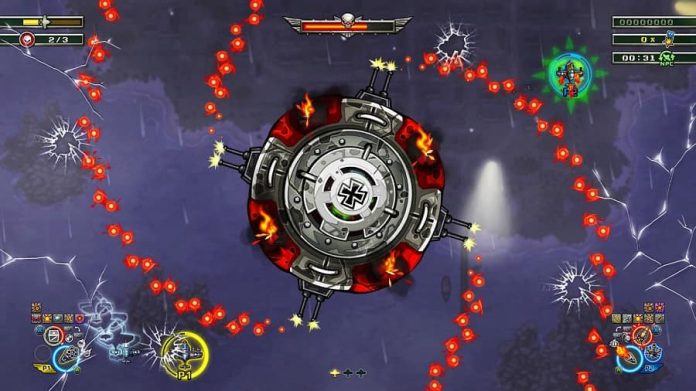 Fans of vertically scrolling shoot ’em ups are pretty well catered for on all platforms. That doesn’t mean there isn’t room for one more though.

Aside from changing the orientation of the action and adding in local multiplayer, Aces of the Luftwaffe – Squadron also sports a new visual style. Out are blocky pixels, replaced with sharp, cartoonish graphics that really give the game some character. It’s the game’s bosses that benefit the most though, the titular Aces of the Luftwaffe, who each have their own stylish vehicles of mass destruction.

But snazzy visuals are useless if a game isn’t fun to play, so you’ll be pleased to hear that Aces of the Luftwaffe – Squadron‘s gameplay doesn’t fall flat. It might also be music to your ears to hear that it tries to offer something more than simply shooting enemies. Although don’t get me wrong, you’ll still be spending the majority of your time doing just that, as well as collecting pickups and avoiding bullets. 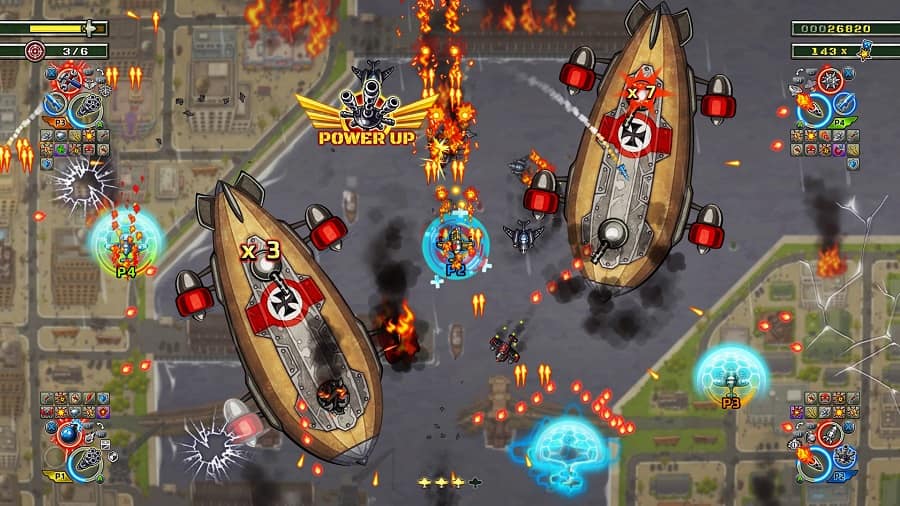 Each and every one of Aces of the Luftwaffe – Squadron‘s 25 stages features a secondary objective for you to achieve. Sometimes it might be to simply shoot a number of ground units, but on the odd occasion it might be to do something more interesting, like defending a plane or staying out of sight of enemy searchlights. They’re not groundbreaking tasks in any way, but they do offer a challenge other than simply making it to the end of the stage unscathed. You’re rewarded for your efforts, too.

Killing enemies will often result in medals being left behind, medals that essentially act as experience points. Earn enough medals by collecting them during stages and you’ll level up, granting you a skill point to allocate. Factor in that completing a secondary mission rewards you with an abundance of medals, and you’ll see the benefit of completing them.

When it comes to spending your skill points, there are four skill trees available; one for each of the game’s pilots. In single player you’re forced to play as to play as the lead, Mark, who suffers from poisoning. If more players join you, however, they’ll get to control one of the three other pilots, who also each suffer from an ailment that sometimes rears its ugly head during battle. They all largely play the same in reality though – at least at the outset, anyway. Only once a pilot’s skill tree is greatly developed do they begin to come into their own. 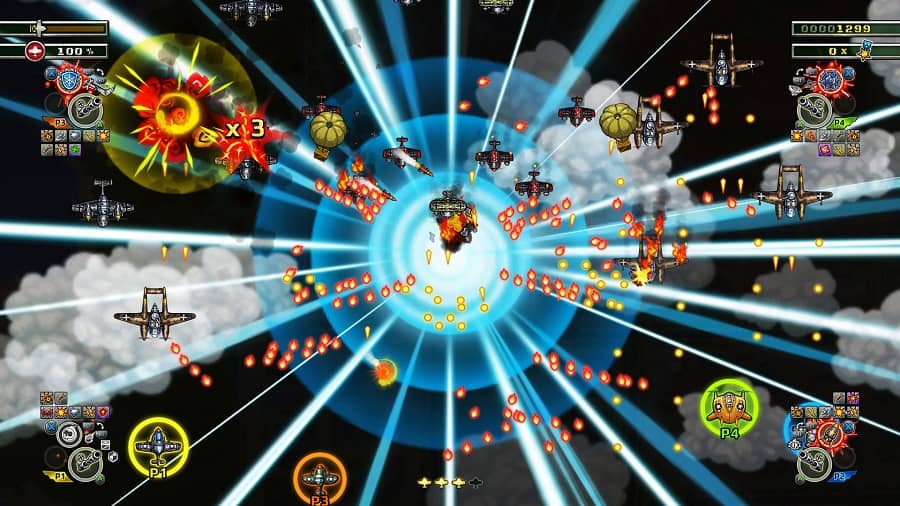 Putting points into a tree

While many skills will simply provide bonuses to a pilot’s health and damage output, there are some that benefit the whole team and others that unlock special abilities. It’s wise then, to plan ahead, and spend your points in a strategic manner to acquire the most beneficial skills as early as possible. And the skills that are more helpful to you may differ depending on whether you’re planning on playing alone or with friends.

With all four pilots taking to the air no matter how many players are present, their skills can sometimes come in useful even if there’s no one directly controlling them. If you’re dead set on playing Aces of the Luftwaffe – Squadron with your friends, for example, you might decide to spread your skill points rather evenly between all the pilots, ensuring they’re all equally capable of dishing out damage. If you know no one is going to play it with you though, you can double down on upgrading Mark, while only upgrading other pilots to gain any passive benefits that are available. It’s up to you.

This freedom to develop Aces of the Luftwaffe – Squadron‘s pilots, as well as multiple difficulty levels, gives the game considerable depth and long-lasting appeal. You could blast through all of the game’s stages in only a few hours on normal difficulty, despite the odd difficulty spike here and there. To do so on extreme difficulty, however, you’re really going to have to max out each pilot’s skill tree and master the stages. And if you need another reason to go back through stages other than to obtain more medals, there are some additional aircraft to unlock, which aren’t given to you so easily. 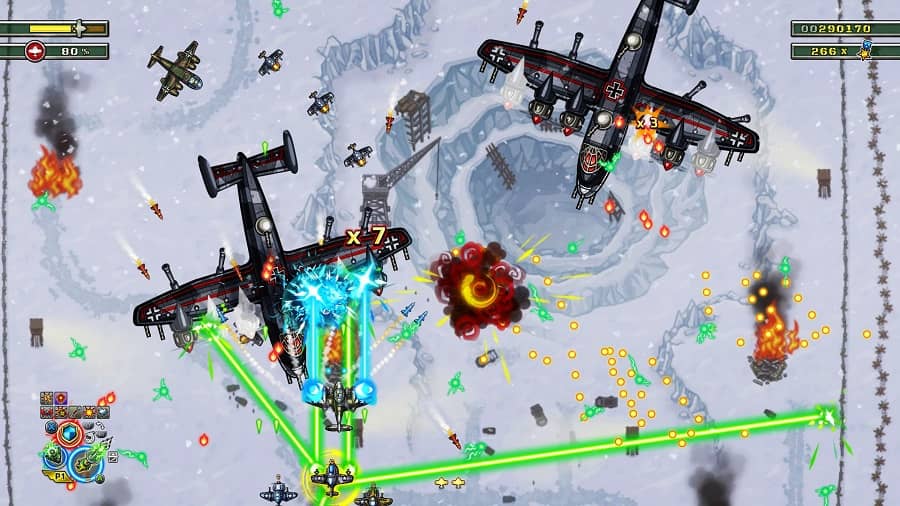 While Aces of the Luftwaffe – Squadron doesn’t feel as enjoyable to play as the likes of the recent Sky Force Reloaded, it has kept me going back to it time and time again inbetween playing other titles. It has become a palette cleanser. What’s undoubtedly the worst thing about it is its clichéd and unengaging story, which is also accompanied by hammy voice acting. I tried to be good and endure its story scenes, but eventually I just had to skip them to get back into the action.

It may be unspectacular, but there will be many who’ll fall under Aces of the Luftwaffe – Squadron‘s charm. It’s colourful and challenging, has enough depth to keep you going back for more, and you can play it with friends. It’s a shame that there’s no online multiplayer and that the story is a bit of a dud, but they’re not deal breakers. If you’re after a new shoot ’em up to waste away some hours, either alone or with friends, Aces of the Luftwaffe – Squadron will serve you well.

Aces of the Luftwaffe – Squadron is available on PS4, Xbox One, Switch and PC. We reviewed the Xbox One version.