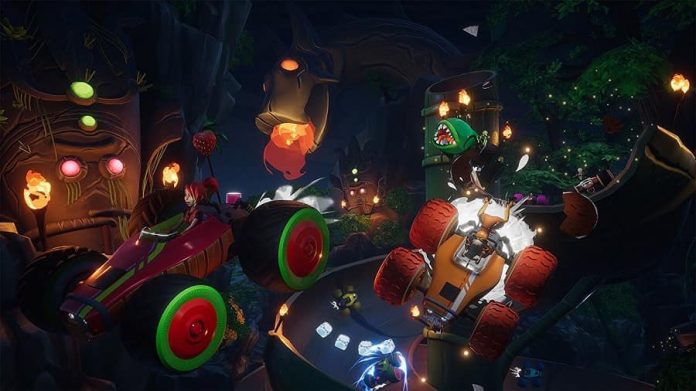 With its bright colours and unique premise, All-Star Fruit Racing is certainly a game that grabs your attention.

After playing it for only a few minutes, however, it’s clear that its gameplay isn’t too fresh. It’s a run-of-the-mill kart racing game with a drift button, special attacks and plenty of cups to go after. But it’s when you dig further under the hood that you realise it’s misfiring on so many cylinders.

For a start, the handling leaves a lot to be desired; there’s not a lot of feel to it. It’s as if your chosen vehicle just floats over the game’s tracks rather than drives on them. And don’t even bother to try using the game’s first person view; it makes controlling your vehicle a pain as you come out of drifts.

The movement of your opponents seems really strange, too. They quickly rotate from left to right, scrambling across the track like they haven’t a clue. And if they hit you, there’s no satisfying clunk; they just bounce off like you’ve got a force-field around you. Every race with opponents involved just feels weird. Yet despite their clumsiness when they’re near you, they’ll attack and pip past you on the final lap enough to cause frustration. 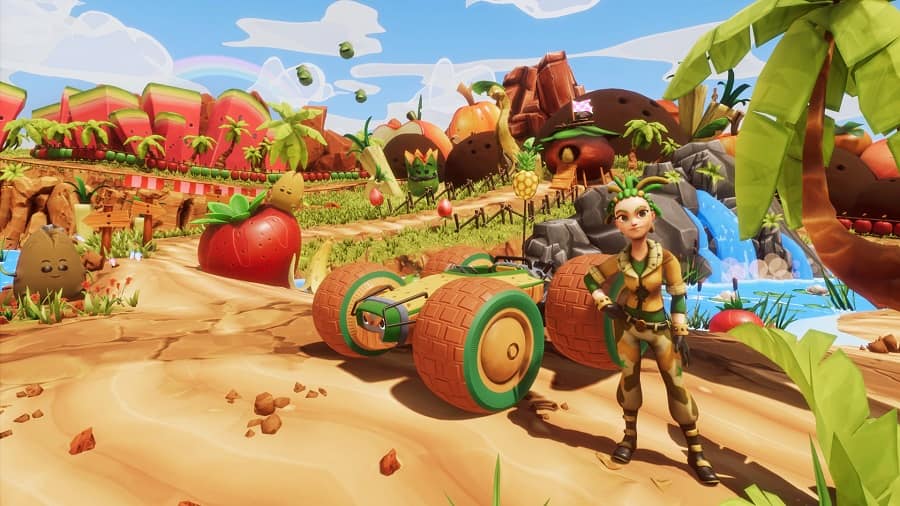 A peachy range of modes

All-Star Fruit Racing is yet another one of those racing games where it feels like your performance really doesn’t matter a lot of the time. Victory is often more down to luck. Sometimes you’ll speed to the finish fine without so much as a whiff of a challenge. Other times, you’ll be bombarded by enemy attacks and struggle to reach the podium. No matter how well you race your opponents are never too far behind, waiting to ruin your day.

Those who persist will find plenty to go at though. There are eleven cups to earn in career mode, a duo of championship modes, time attack, and single race options. You can even play in split-screen or take the action online if you can find someone to race against, but that might be a big if. There are also plenty of characters to unlock, each with their own super attacks. And surprisingly, they’re all female.

Perhaps the best thing about All-Star Fruit Racing is its unique power up system. You see, instead of collecting random pick ups as you blaze around the track, you collect fruit. Each piece of fruit you collect gets added to the corresponding season’s blender in the bottom-right corner of the screen, and once one or more blenders are full, you can turn the juice into a power up. 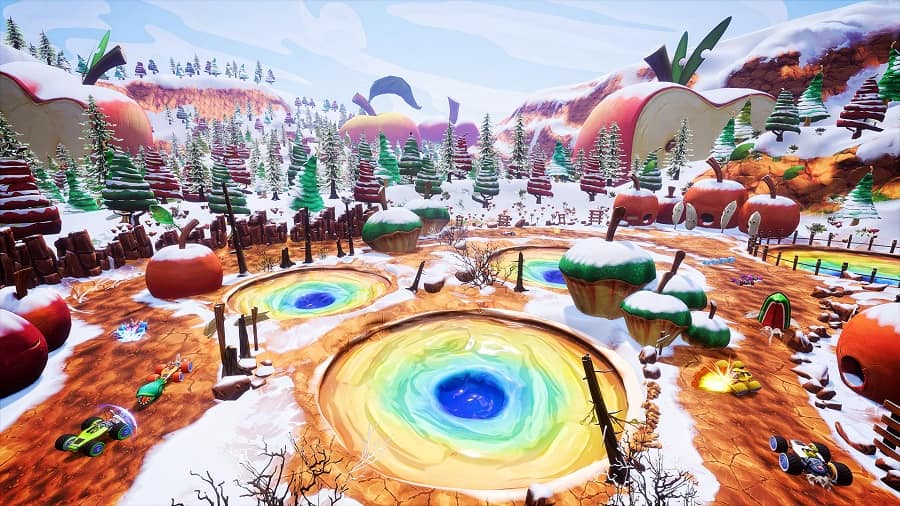 All the typical power ups are here; projectiles, boost, a shield, and more, giving you plenty of ways to take the fight to the opposition. You can even detach certain blenders if you wish, allowing you to make sure you get the power ups that you need. Or you can leave them all connected, enabling you to use your character’s unique ability when all four blenders are full.

Its unique power up system isn’t enough to save All-Star Fruit Racing from being any more than mediocre, however. While it can be fun in short bursts, its unsatisfying handling, unpredictable AI and downright awful music just grates after 30 minutes or so. If you want to play a kart racer on Switch, why would you play anything other than Mario Kart 8 Deluxe? On Xbox One, isn’t Sonic & All-Stars Racing Transformed pretty much unbeatable? And on PS4 and PC, well, you’ll probably get more fun out of Table Top Racing: World Tour.

Only after you’ve exhausted all worthwhile alternatives is All-Star Fruit Racing worth giving a go, and also probably after a hefty discount. While it’s slightly more reasonably priced on PC, its price on consoles – a mind-boggling £35 on PS4 and £28.79 on Xbox One – is hard to swallow.

All-Star Fruit Racing is available on PS4, Xbox One, Switch and PC. We reviewed the Xbox One version.