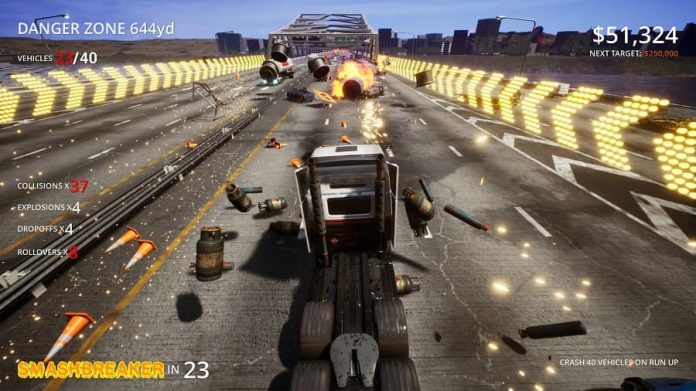 A little over a year ago, Three Fields Entertainment released Danger Zone on PS4 and PC.

Being honest, we weren’t all that impressed with it at first. We were excited about once again jumping into an experience akin to the Burnout series’ crash mode, but it just didn’t quite hit the mark. It was tweaked and expanded upon after launch, however, and by the time it reached Xbox One nearly five months later, it was undoubtedly a better game. And Three Fields Entertainment has improved on the formula yet again with Danger Zone 2.

Once more, with feeling

Offering 23 danger zones for you to cause mass destruction upon spread across three regions, Danger Zone 2 is structurally identical to its predecessor. After completing training if you need it, you start at the first stage in region one and need to obtain at least a bronze award to continue onto the next. Danger Zone 2 is mechanically very close to its predecessor, too.

While getting a bronze award is all you need to proceed through the game, those who want to score big and gain the coveted gold or platinum awards will need to optimise their crashing antics. Basically, like in the original Danger Zone, players need to collect bronze, silver and gold cash pickups while causing mass destruction. And to do that, efficient use of smashbreakers and manoeuvring your vehicle while it’s in the air is a must.

So far, so Danger Zone, right? But there are some pretty big changes. The first one is apparent as soon as you look at any screenshot of the game: it all takes place outdoors. Out are the dark and visually unappealing simulated test chambers of the original title. In their place are country roads and motorways drenched in colour and sunlight. Does it change the gameplay? Not really. But it makes the game a hell of a lot more interesting to look at and play. 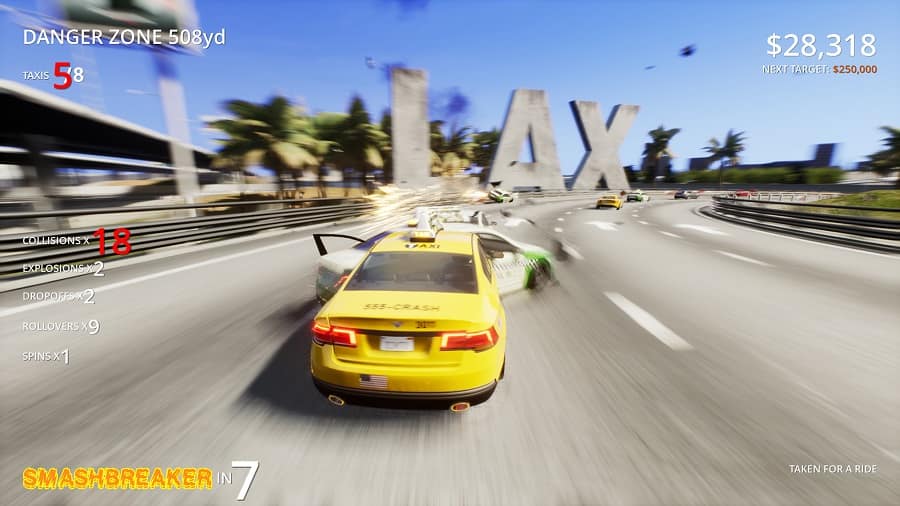 The biggest change introduced in Danger Zone 2 that does affect gameplay, however, is the inclusion of new Run Up challenges. While the high-impact action that occurs in the danger zone is still the main attraction, your actions as you approach it now matter too. The crux of it is that you can now check traffic, and by holding one of two buttons you can even direct the cars that you check. Most stages then, will have you attempting to take out traffic as you approach their danger zone, though it’s always as simple as it sounds.

You’ll take control of a whole host of vehicles across all of Danger Zone 2‘s stages; sports cars, taxis and lorries included. And depending on what vehicle you’re driving, your approach to checking traffic needs to be adjusted. In a lorry, for example, you’re a behemoth, and can pretty much pile through anything. Whereas in a sports car, you can knock small cars out of the way but you’re probably better off avoiding traffic altogether.

A recipe for chaos

For the most part though you’ll be driving standard vehicles, capable of shunting equally sized vehicles around like projectiles. And you’ll need to do so to take down larger vehicles such as vans and articulated lorries. Crashing vehicles isn’t the only thing you’ll be challenged to do during your run up though; you’ll also be tasked with achieving boost chains or speeding through checkpoints too.

For me, Danger Zone 2‘s Run Up challenges really propel the experience to the next level. They add more variety to the game, as well as increased depth and challenge. The only thing they don’t do, though, is make achieving the game’s coveted platinum awards any less prescriptive. To get platinum on any given stage you’ve got to complete the Run Up challenge and then crash, collecting all three cash pickups in order to get the Grand Slam bonus. It’s fun and challenging, for sure, but it limits further replayabilty. 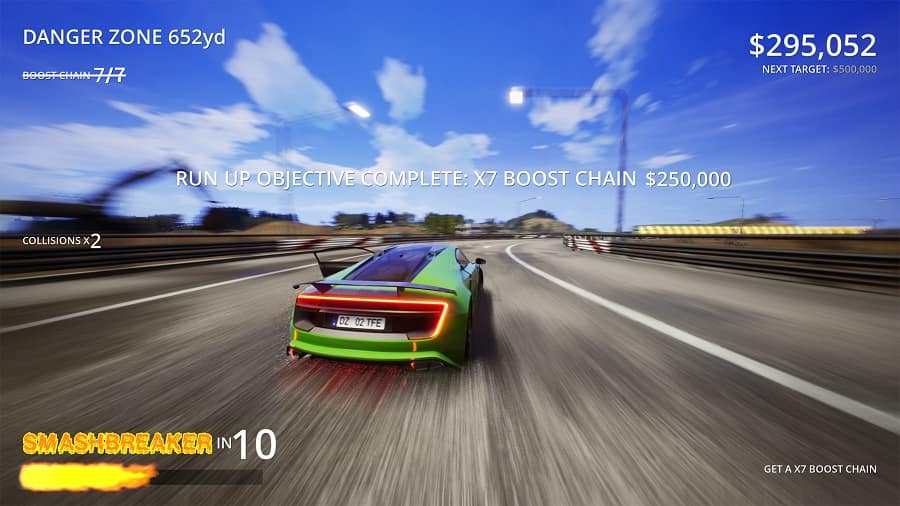 It took me about three hours to get platinum on all 23 of Danger Zone 2‘s stages, and now there’s little reason for me to go back to them. Luckily, completing the game unlocks three bonus stages, in which your aim is strangely not to crash. Instead, you have to race to complete numerous laps around a track, with the added challenge of seeing how many boost chains you can do. Perhaps it’s a little taste of what’s to come in Three Field Entertainment’s recently announced Dangerous Driving later this year?

There are some other issues in Danger Zone 2 as well, but none that really detract from the experience. The handling of some vehicles feels a little floaty, for instance, and the physics are a little strange at times, but this isn’t Gran Turismo. Additionally, Danger Zone 2 is a great-looking game, with the option to play at either 4K with 30FPS or 1080P with 60FPS on Xbox One X. On both modes the frame rate can take a bit of a hit at times, but I daresay performance will be smoothed out shortly after launch.

In any case, Danger Zone 2 is hugely enjoyable. The only thought on my mind as I finished up getting all of its platinum awards was that I wanted more. I loved completing its new Run Up challenges, checking traffic, performing jumps and boosting like a maniac. And I loved figuring out the best way to initiate each crash, enabling me to explode my car and pick up all the cash bonuses along the way. Whether or not the three hours or so of riveting gameplay it provides is worth the asking price is up to you, but there’s nothing else like it while it lasts.

Danger Zone 2 is available on PS4, Xbox One and PC. We reviewed the Xbox One version.