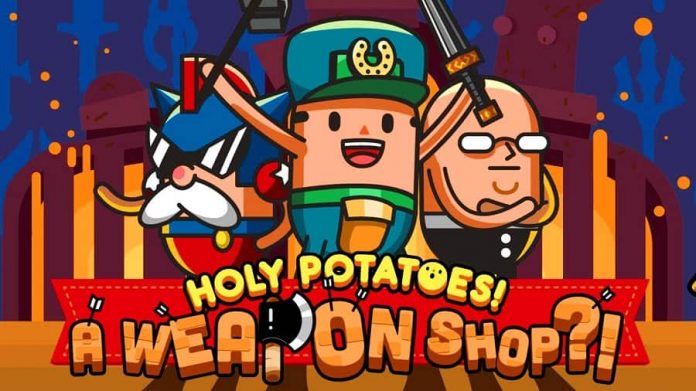 A game with a blacksmith called Laura Craft, a potato-shaped dog and a customer called “Claude” who looks a lot like Final Fantasy VII’s Cloud Strife? I’m in.

That game would be Holy Potatoes! A Weapon Shop?! from Daylight Studios and published by Rising Star Games. It’s a management sim at heart, but forget about the dry monotony that you might expect from the genre. The Holy Potatoes! take on management is all about the comedy. In a world where potatoes are people, humour is mashed in at every possibility, and it makes for an entertaining and engaging – if a little repetitive – game that’s mostly hard to put down.

Originally released on PC back in 2015, Holy Potatoes! A Weapon Shop?! has just made its way to Switch, and surprise surprise, it fits perfectly on Nintendo’s handheld format. You take up the role of a young potato who’s suddenly inherited a weapon shop from his grandfather. That grandfather was quite the legendary blacksmith, so in order to supply good quality weapons to the local heroes and warriors you’ve got to train up your new staff, improve your store, and become the best weapon seller you can be. Should be easy enough, right?

When you arrive at your new weapon shop, you’re met by the mysterious (and very bald) Agent 46. He won’t tell you what his profession is… but you get the impression it’s something rather unsavoury. But he tells you he owns 99.9% of the weapon shop, so you need to work hard in order to pay him a regular cut of the profits. Along with that you’ve also got to buy materials, pay your staff, and continually upgrade your shop to get bigger and better equipment. Holy Potatoes! A Weapon Shop?! is a cathartic loop of crafting weapons, selling them, scouting for new materials, completing tasks and researching new items. 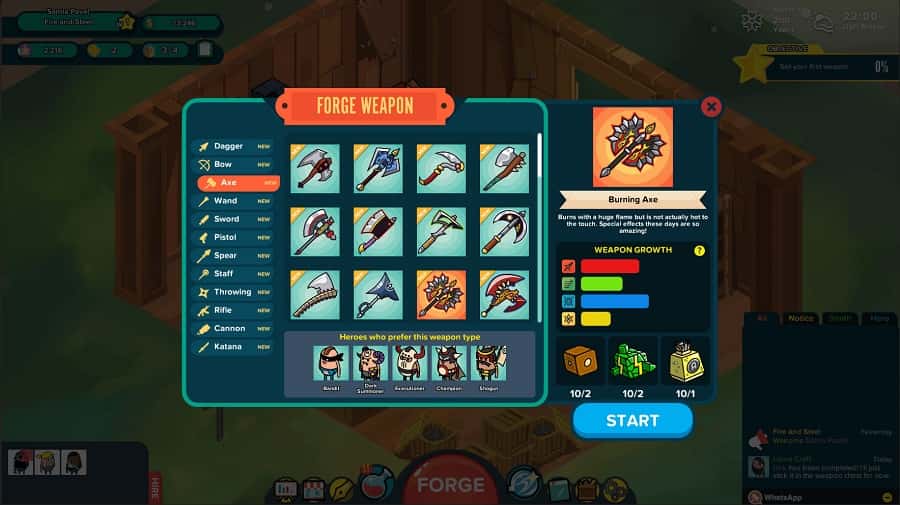 If you’ve ever played an RPG before, you know that weapon stats are important. You may not be doing the adventuring here, but those stats are very important to your customers. Within your weapon shop, you have four workstations, each dedicated to a specific stat – damage, speed, accuracy and magic. Different weapon types favour different primary skills, and each customer has their own preference too. Axes, for instance, are best with high damage, and wands, of course, want a high magic stat. The higher those stats, the more money you’ll be able to sell them for. And earning money is the aim of the game.

Selling weapons means sending one of your smiths out to a nearby town. For every weapon you sell, you’ll be shown a few possible buyers, the price they’re willing to pay, and how it’ll affect their skill level. The more suitable a weapon is for a customer, the more they’ll be willing to pay you – and the better their skill level will be. Increasing customers’ levels is a sure-fire way to increase your shop’s fame, and by becoming more popular you can continue to improve. 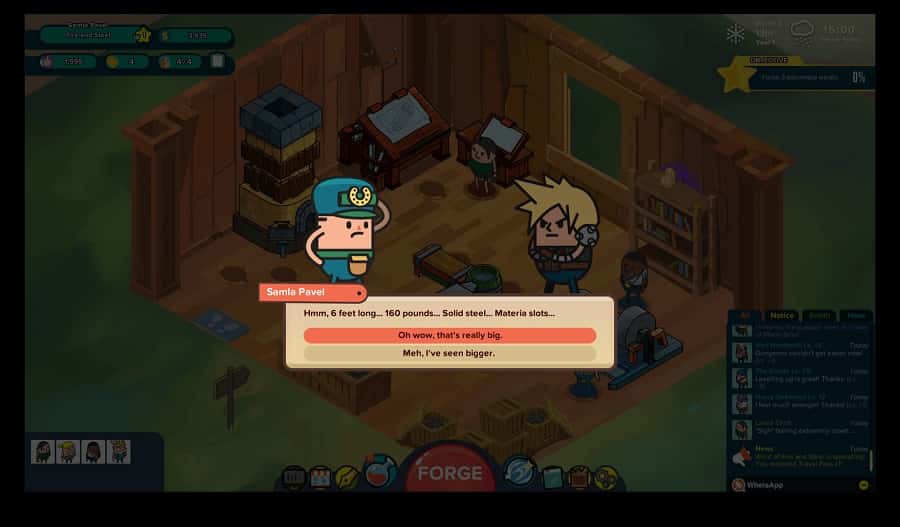 Thankfully, Holy Potatoes! A Weapon Shop?! gives you plenty of direction by always having a mission to work towards. It’s generally something straightforward, like crafting a weapon of a certain class, or selling a weapon to a particular customer. It can also be something a little more vague, like reaching X popularity, but it means you always have a goal to work towards. Alongside doing that, there are shorter missions you can pick up at any time that require you to craft an item with particular stats. These are timed, so depending on the level of your smiths, you may not be able to complete them, but each mission in the list is marked by difficulty which makes it easy to see at a glance which ones your staff will be able to cope with.

You’ll also get random customers walking into your shop, demanding something particular. The first of these – and perhaps the best I’ve encountered so far – involves a young gentleman called ‘Claude’ who needs a giant ‘Busted Sword’ with plenty of slots for his materia. He looks awfully familiar…! That particular mission isn’t timed, but others can be, and since they generally have a high pay out, you’ll want to prioritise them over your other day-to-day tasks. 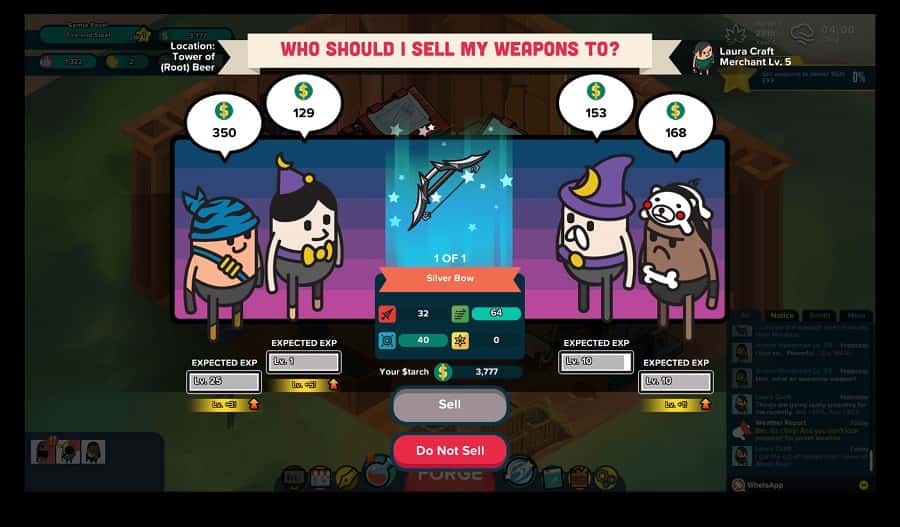 Holy Potatoes! A Weapon Shop?! likes to keep you on your toes by mixing things up in this way. You can get a nice rhythm of crafting > selling > buying > researching going, but then a random event will occur and you’ll have to drop what you’re doing. It at least helps to keep the game loop fresh, because my only complaint is that it can soon get repetitive. It’s incredibly rewarding to see your shop grow and to research new weapon types, but the gameplay doesn’t evolve with it. Whatever level you’re at, you’ll still craft, buy and sell in the same way – you’ll just be dealing with fancier-looking items and larger amounts of money.

Thankfully though, Holy Potatoes! A Weapon Shop?!’s charm and sense of humour helps give the game more longevity than its gameplay loop alone. Its witty dialogue and groan-worthy character puns will keep you chortling along even after you’ve got a little bored of going through the same menus. It might not keep you hooked for hours at a time, but it’s the ideal game to dip into for short bursts – and the Nintendo Switch offers the perfect platform for that.

Holy Potatoes! A Weapon Shop?! is available on PC and Nintendo Switch. We reviewed the Switch version.