I used to be obsessed with buying physical games – until I realised how easy it was to just buy digitally. Now, I’m beginning to wish I’d never bought a game digitally at all.

I remember when the prospect of digitally purchased games first started sprouting its head. A novel idea that saves us a trip to the store, as does it help fill the pockets of console manufacturers as their storefront takes a share of each game sold. Seemingly a win-win for everyone. Yet after a small excursion down memory lane, I realised something I had once feared might soon come to pass.

Nostalgia, both a saviour and a curse

I’m a stickler for reliving the old days. Part of that is thanks to my enjoyment of historical oddities but a more truthful reading would tell of a guy who is sick and tired of the responsibilities of adulthood and would rather waste the hours away watching marathons of old commercials on YouTube. Whatever the reason ultimately is, I’m a slave to the feeling nonetheless and in line with this dependency, I decided to buy a launch Xbox 360 console.

I already had two, mostly working Xbox 360 consoles, mind you. One was an early Elite variant I had bought after my original console’s disc tray died on me. Purchasing it on a military base on a whim, thanks to my dad’s generosity (or his inability to tolerate my incessant whining, more likely) I received a new, shiny black Elite 360 with a copy of Splinter Cell Conviction to boot. However, in time even this console would not last, as it too had a disc tray malfunction during my first year post secondary school. To replace it, I then found a refurbished Xbox 360 Slim which came with a 250GB HDD.

The refurbished Xbox 360 Slim currently sits beside my PC’s monitor. The only console in my apartment with a wired connection to my router, I often return to it to play games like Halo 3. Although it works perfectly fine, I longed for a more accurate representation of the days when I first played Halo 3. Where the aesthetics of design mirrored the decade they were in. I’m of course speaking of the dreaded – or beloved, if you’re a monster like me – original Xbox 360 dashboard. Otherwise known as “The Blades”.

Perhaps the silliest thing I’ve ever done, save for the time I drenched myself in gallon of milk as a child for no good reason, I decided to take the plunge and purchase a launch Xbox 360. While I was able to find one for cheap enough of a price to justify, it still felt odd buying a third Xbox 360. After all, if I wanted to use it, I wouldn’t be able to play games online or connect to Xbox Live, lest the console update itself to its most current iteration, losing The Blades forever. Yet, I purchased it anyway.

By the time my console finally made the journey from halfway across the country to my apartment, I was ecstatic. It had been years since I had even seen the original Xbox 360’s dashboard in person, after all. Oftentimes I’d catch myself daydreaming of a time gone by whilst replaying Viva Pinata for the hundredth time, which would treat me to a tutorial showing small glimpses of the old dashboard. So, without wasting much time, I plugged the console in and gave it a try.

I popped in a copy of Dead or Alive 4 to try first. It felt appropriate since it was one of the first Xbox 360 games I’d owned. And, since my new (old) console came without a hard drive, I figured I would simply use the old one from my Xbox 360 Elite. It, much like my Xbox 360 Slim (typing this out in real time is really making me feel silly) had a beefy 250GB HDD, but it had the added benefit of being easily transferable –  these models had removable hard drives on top. After a quick realisation, however, I put two-and-two together. The hard drive from my Xbox 360 Elite had a lot of digitally-purchased games on it. Since its disc tray was broken, it was the only way I could have played games on the machine outside of just modding it myself. So, naturally, I assumed I’d be able to play these digitally purchased games on the new launch Xbox 360, with the blades dashboard and all.

If you’re reading this and are thinking to yourself how stupid I am for not realising how this sort of a thing wouldn’t work, congratulations, you’re a smarter person than I. Confusingly, I looked at the games library tab to see what would pop up, assuming a few newer titles wouldn’t register on the old Xbox 360’s system for whatever reason. Only a few games showed up. I could only see Xbox Live Arcade titles, as the Games On Demand service didn’t go live until much later, so the infrastructure to support them didn’t exist on this older console. Bafflingly, however, as I tested my copy of Sonic the Hedgehog on the Xbox 360, the game would only start in “trial mode”.

To my chagrin, Xbox 360 games downloaded digitally need to first be activated online before use on a new console. Since these games existed on a hard drive that was used on another console already connected to the internet, I had assumed a hard transfer wouldn’t be much of a problem. Of course, that’s not the case. The tens of games I had purchased via the Xbox Store, games that I didn’t own physical copies of, were like dust in the ether of digital space. Practically nonexistent. Not a problem for me personally since I’m privileged enough to now own three damned Xbox 360 consoles, two of which can connect to the internet normally and access all of these said games, but the whole endeavour did make me realise something else. Something I haven’t worried about in years. 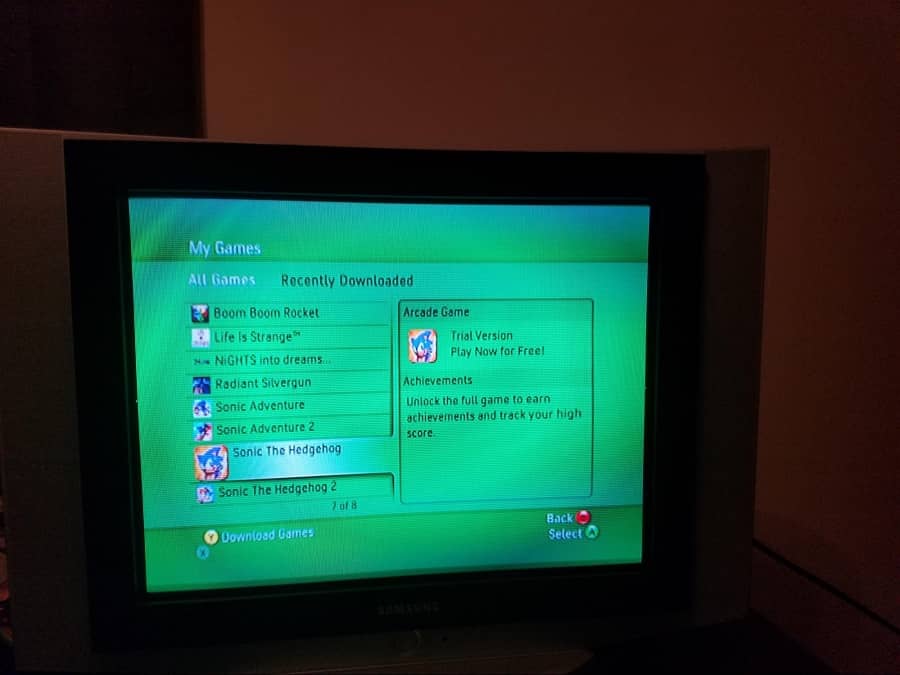 Will there be a day where we can no longer play our games?

When the idea of digitally downloaded games first came around, I was receptive to the idea, but I tiptoed around it with caution. As I’ve already explained, I’m a slave to my own nostalgia. Returning to older consoles to play five and ten-minute stretches of games, only for the sheer rush of memories the experience provides, is a ceremony I enjoy often. One of the immediate downsides to digital games in this context is their availability ten, twenty, thirty, or fifty years from now.

For all my other retro consoles, all I need to do to re-live an older game is to pop the disc/cartridge in and press play, so long as everything is still working. As time goes on, this becomes a growing issue for every machine, but what’s never been a problem is the availability of the games themselves. In a world where digital games are the norm, what happens if the console manufacturer goes out of business? Or their online platforms transition to a new infrastructure? While it may seem a bit hyperbolic to envision a future where modern game companies aren’t around anymore to support their games, I’ve seen both instances happen in my lifetime – the former as Sega left the console business, and the latter when Microsoft changed their Xbox Live infrastructure, ending support for games like Halo 2.

At the end of the day, I’d like to believe that game companies would always be able to find a way for people to play the games they’ve purchased. Whether that means selling the rights to other companies or simply patch modern consoles to no longer need authentication checks, there’s still the looming spectre of disaster that hangs over it all. After buying nearly every game on my PlayStation 4 digitally, I do wonder what would happen if, in the distant future, Sony were to exit the games business. Where would that leave me and my games?

As we transition into the internet age, our consoles have come along with us. However, like with social media and other aspects of life that have come with that transition, are there aspects of this rapidly changing environment that we’re powerless over? Perhaps I’m just acting paranoid after a personal anecdote of disappointment, but I also want to make sure I can play video games when I’m eighty years old. Because something is gonna have to distract me from the nuclear fallout, and it might as well be another playthrough of Fallout 4, right?