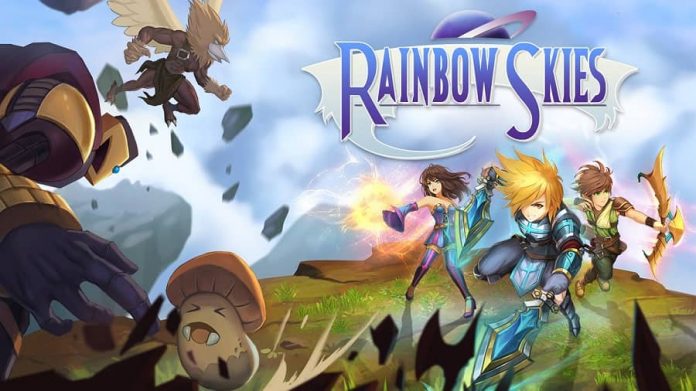 The somewhat belated follow-up to the mildly successful Rainbow Moon, Rainbow Skies fails to capture the magic of its predecessor.

I had fairly high hopes for Rainbow Skies when I first heard about it. Though not perfect, Rainbow Moon was an RPG that I found enjoyable and solid. It didn’t take long for me to grow a bit weary of its sequel, however. Tasked with exploring the world of Lunah, Ashly, Layne, and Damion (who you can rename) must seek out a counter spell to erase the bonding spell Ashly accidentally placed on the three, making them literally inseparable. You’ll fight monsters, learn skills, and meet tonnes of people on your way through the game. While there is enjoyment to be had, I’m afraid it’s far too sparse to warrant my return to this world.

An exhausting and repetitive journey

The campaign of Rainbow Skies is quite long, and is made more troublesome by the lacklustre story and dim dialogue. You will venture through aesthetically diverse locations that don’t really have much variety in terms of layout. The colours and animations, for the most part, do look rather nice, but they are somewhat drowned out by the repetitive nature of the game’s world/fights. As you continue on your way, you’ll learn new skills, level up gear, and have a boat load of side quests to take care of. There is definitely no shortage of things to do in Rainbow Skies, so if you’re looking for an RPG grind fest, this is it.

Later on, the narrative takes a turn to a more RPG staple ‘save the world’ idea. Yet, this doesn’t do much to change to story or haste of the action, as you’re so deep in at that point that it barely even matters. The pacing of the game is also a huge issue for me. Even if you do everything given to you, you’ll very quickly run into fights consisting of eight or more enemies at least a level or two above you. That level difference makes a huge impact, and the game basically forces you to go back and grind your way up before progressing.

Not to mention, the amount of money you earn pales in comparison to what you need. Reviving team members, doing group heals, or refilling MP all cost money and fights rarely grant you a decent amount unless it’s a boss. Weapons and armour cost a fortune, so being frugal becomes a necessity, which kind of drags you down. 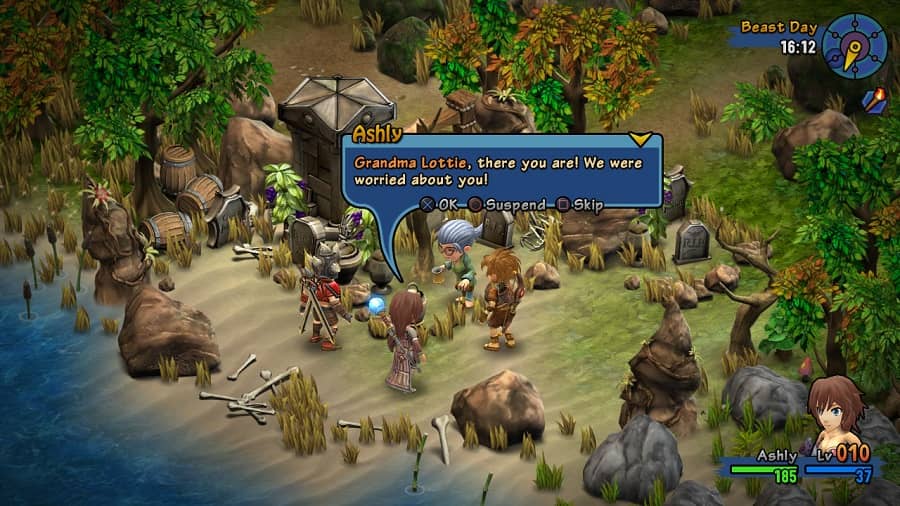 Good, when the dust is flying

Combat in Rainbow Skies is easily its best aspect. The various amount of skills each character can learn, the plentiful amount of weapons, and strategic nature of the gameplay is very nice. Animations of attacks, at least the magic attacks, look sharp. One big downside to the battle system, however, is the grid system you fight on rarely varies. The amount of creativity you can craft for your battles is quite limited, which really sucks when the enemies vastly outnumber you. That being said, however, I like the amount of thought that each battle necessitates. When walking around the overworld, you’ll also have prompts for surprise battles which keeps you on your toes. Also, it can get you into trouble if you accidentally try to pick up something and activate a battle when your party is almost dead.

The fights in Rainbow Skies work on an action system. Every square moved, attack taken, or item used is an action. Sometimes, I have to say, it felt like enemies were taking more moves than they were allotted. But that might just be my frustration talking. Your ‘Speed’ stat determines when in the rotation you move. It does pay off to filter points into Speed, especially for a particular character who was zoning or debuff attacks, so that you can start the battle off on the right foot. This is extra important because abilities level up based on usage. XP gained is dependant on the participation of that character in the fight. If they die halfway through, they won’t receive the full XP potential of that fight. Keeping your party alive, managing MP/HP, and properly dictating the flow of combat is truly the best and most challenging aspect of this game. 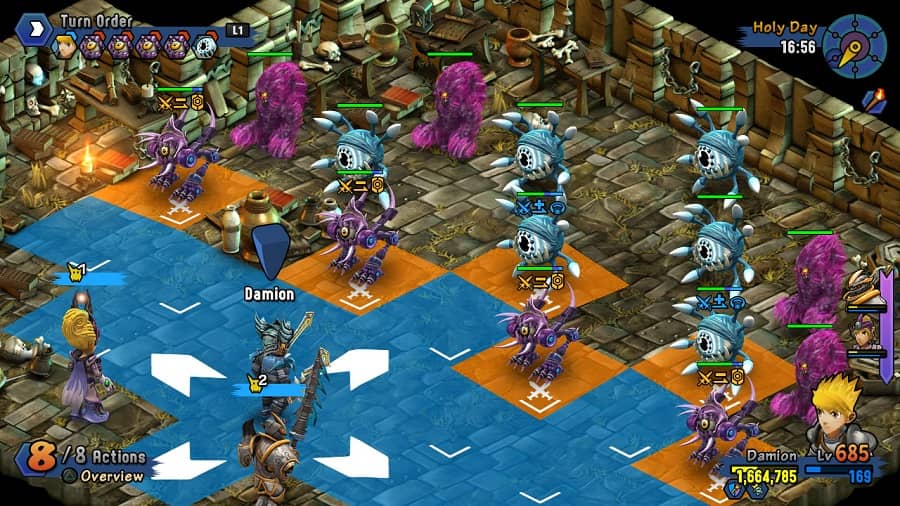 Not the brightest rainbow

Rainbow Skies does not filter out anything, it seems. You’ll have upwards of five side quests at every town you run into and plenty of caves and labyrinths to explore. There are also several difficulty options that let you adjust the game to your liking. Combat difficulty can be raised throughout the game by beating a certain number of fights at a certain difficulty level. For me, though, this was not something I took much interest in as base level difficulty is challenging enough and requires a large amount of time commitment. But, it is a nice touch to have something there for the dedicated player base who want to truly test their mettle in the game.

For what it’s worth, Rainbow Skies provides a good challenge and a fun levelling system. Though dense and repetitive at length, there are moments that are memorable. I don’t see myself itching to return to it anytime soon, but I don’t doubt it’ll find some love among the turn-based RPG audience. It certainly lacks the punch and awe of the more inspired RPGs of late, and it shows the more you play. Hopefully, should another rainbow decide to appear, it’ll be far more colourful.

Rainbow Skies is available on PS4 and PS Vita. We reviewed the PS4 version.