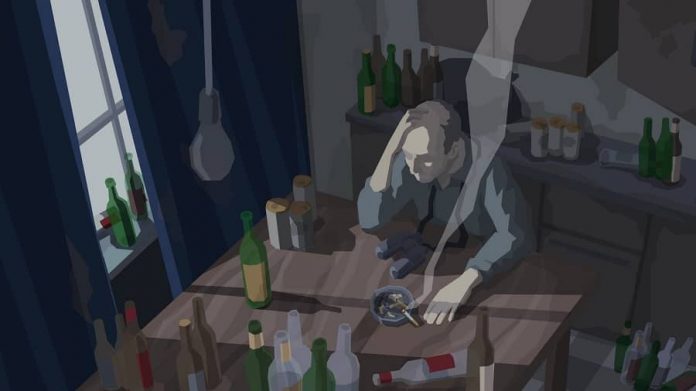 This Is The Police 2, sequel to the surprise indie hit released in 2016, does everything its predecessor did and more. There is more drama, there is more police management and there is a hell of a lot more action.

This Is The Police 2 is set in the small, fictional town of Sharpwood. You’d think that up in the countryside it would quieter, less corrupt and a lot more simple. Well Jack Boyd, disgraced police chief of Freeburg city from the first game, quickly learns that this is not the case. He learns what anybody who has watched Hot Fuzz already knew; the countryside is a deadly place full of shady dealings and even shadier politics.

The sleepy town setting is echoed by the more laid back approach by the officials. There are less officers and no one, apart from a select few, know your real name. It makes a big difference from the big city setting of the first game and some of the new management decisions – like no longer having two separate shifts – are well reflected by the change of setting.

So why do I say that This Is The Police 2 is bigger than its predecessor, despite being set in the sleepy, cold north? Because it asks you to do so much more. Though the main crux of the game will feel familiar, with the town map alerting you to calls of citizens and you needing to send officers to respond, it has added extra layers of strategy and detail. The first of these improvements is in managing equipment – you have to choose who to give your equipment to and when to buy anything new. These tasers, nightsticks and pepper sprays are woven into the game really well and make a big difference on the way you will approach certain decisions and situations throughout Sharpwood. 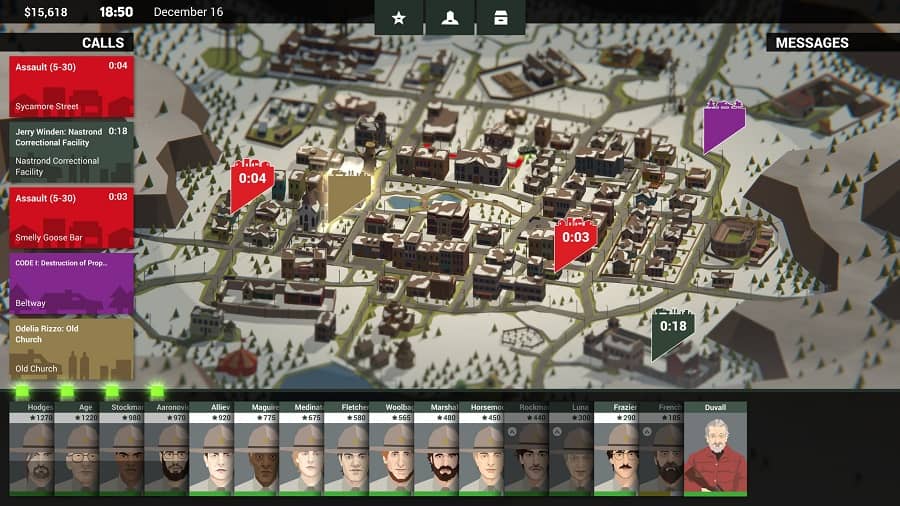 For those familiar with the first game, you will remember certain calls needing your input in deciding what actions the officers take. On the whole, these decisions seemed pretty pointless – unless you picked the bad or funny option on purpose to get a pesky cop killed. However, this has changed completely in This Is The Police 2. The decisions are much harder to make, and they are much more frequent too. Often, the right choice of action will depend on who you have sent to answer the call and what equipment they’re packing. In fact, some of the options will not even be available unless you have the right stuff with you. Want to taser that fleeing criminal? You better hope that you sent an officer with one, otherwise they’re getting away.

These decisions will also be based on the level of professionalism and skills that your officers have. Each individual cop will have a level of professionalism that grows as they stop crimes, arrest criminals and solve murders and the like. But unlike the first This Is The Police, this isn’t the only thing that matters; there are also skills which help make the officers that bit more individual and more effective in different areas.

Strength, intelligence, speed, stealth, shooting and negotiation are the skills that a police officer can possess, and they help out in all sorts of different ways. Firstly, there are the crime scene decisions that you have to make. If your officers are more skilled in negotiation, then you may want to talk an aggravator down. But if you’ve sent a bunch of tough nuts, then you may want to use your strength to restrain the offender.

This simple addition of skills makes the force feel more colourful and adds more depth to the strategy alongside the use of equipment. And like before, there’s also the internal drama to deal with – some cops will support you and some will not. Even the most skilful cop will be useless if they choose not to follow your orders, so some internal espionage will be useful so you don’t end up be chastised by someone who won’t take orders. 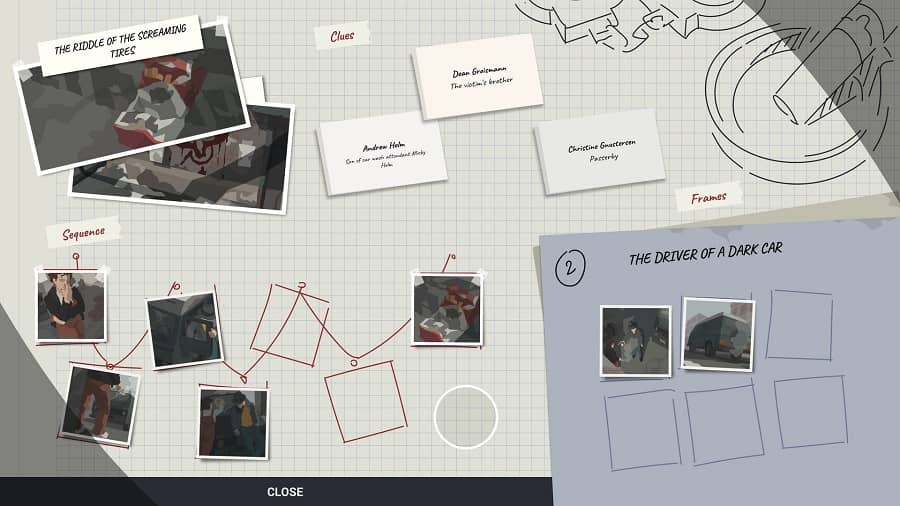 Your officers’ skillsets also have other uses. While in Freeburg, you had a whole department of detectives, but in the cold north of This Is The Police 2, you have to rely on one of your officers to do the dirty work. Those with higher intelligence and professionalism work better at finding clues and frames. Yes that’s right, in this sequel the detective sequences aren’t all about finding the right frames and selecting them in the right order; they’re also about selecting the right suspect. Unlike the first game, you can put together a coherent sequence of events for the innocent party. That means you may want to get your officers spending time working on finding new clues, so you finger the right person.

This is an interesting move from the developers as the original mechanics of the detective sequences were well praised. While they’ve have kept the frame sequences, you now must choose these frames from a selection of suspects. I believe this is the right decision to go as you do feel more like a detective, scanning clues for important details. It also stops those annoyingly long-winded sequences that had far too many frames in the sequence that meant the right order of events sometimes seemed arbitrary and annoying. Now, this element is shortened for a focus on possible suspects and building a case that they can be tried for.

While this may be a bold move by the developers, it has nothing on adding a totally new XCOM-esque squad strategy mode into the game. It certainly wasn’t expected by fans and it didn’t need to be included but, bloody hell, it works. 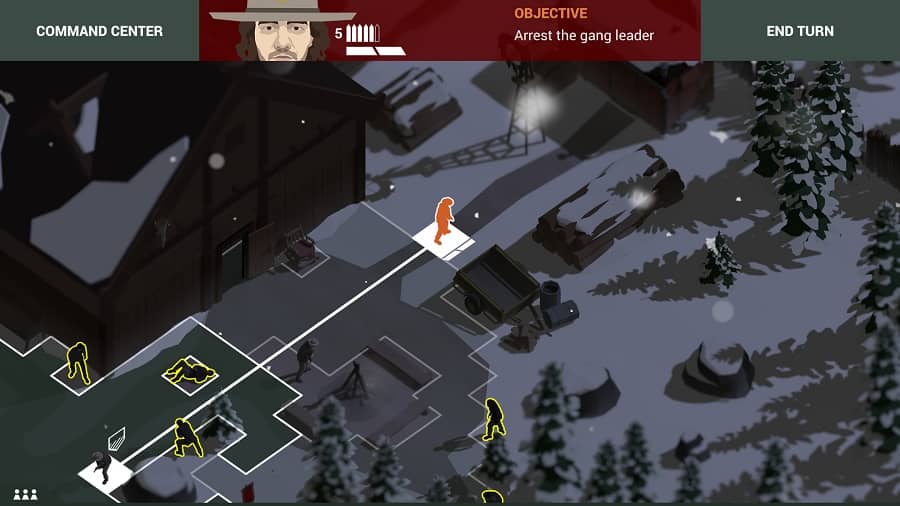 For certain calls, like hostage situations and bomb threats, a full scale operation is called for. Now, when you send your officers to the scene you’ll, also get to play their actions out in a gridded, top down, strategy mode. Before you get into the operation you can talk to witnesses and bribe them into telling you information about the amount of offenders on the scene and where you’ll find hostages and traps. Each turn, you will get to move your officers, use their equipment or shoot at the bad guys. You must utilise cover and work out a strategy that achieves the operation goal.

Again, what strategy you can use will depend on the officers at the scene, their individual skills and what equipment they’ve brought. At the beginning of the operation you will get to choose what perks individual officers will have. These perks depend on the level of an officer’s skills; for instance, those who have a proficiency in stealth will be able to open windows and doors silently allowing you to sneak up on the enemy, while shooting perks will make you a better shot. Certain negotiation perks will allow you to arrest an enemy without handcuffing them. So choosing who to take on an operation may depend on the operation goal and the skills of the individual officer.

For one particular case, I had to silently infiltrate a hostage situation, taking down all enemies without alerting anyone. It was a hard and long operation but thanks to the perks of my more stealthy cops I was able to do it. I also was surprised how helpful a fast and strong cop armed with a baton could be; it allowed me to get the drop on an enemy and stun them for a good amount of time before arresting them when everyone else was dealt with. But it was only because I assigned equipment with a possible operation in mind that I was able to succeed. I was lucky, too, that I hadn’t used a taser at a smaller crime scene as I needed every one I had for this operation.

In contrast, I have had operations go seriously wrong; you can’t control disloyal officers, who impact how well you can work as a team. While this does get annoying, it also makes the need to know your team well that much more imperative and highlights the complexity of the sheriff’s job. It was this that impressed me the most in This Is The Police 2. It weaves all the new mechanics into each other so well, making each decision about skills, equipment and personnel much more impactful. 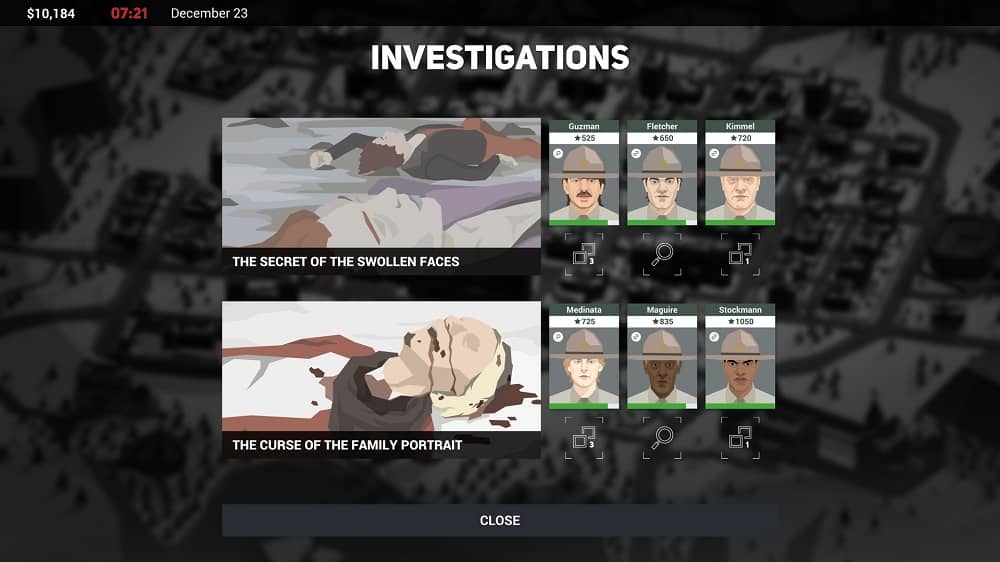 Overall, This Is The Police 2‘s mechanics are a vast improvement on an already solid formula, and this change for the better also stretches into the game’s plot. The story of Jack Boyd, the grumpy, old, maybe-corrupt official is continually compelling, though I won’t ruin it for you. The extended use of animated cutscenes and not just comic style frames is also much appreciated, as it really makes certain scenes pop. I was continually worried about Jack, both for his sake and others who he lashed out at – he constantly goes into rages and hurts the people who really do care for him. He’s the perfect antihero; you continually hate to love him.

However, if you haven’t played the first game, you’ll likely struggle to keep up with This Is The Police 2‘s TV series-worthy plot. This really is a shame as the sequel is a much more rounded experience than the first game in the series and would otherwise be worth jumping into straight off the bat.

But for those, like me, who played the first game and enjoyed it, This Is The Police 2 is the perfect sequel. It has all the drama you’d want, all the corruption you’d ask for, and the same gameplay as the first, but expanded upon to make it much more enjoyable. The new squad strategy mode is a huge surprise that was neither asked for nor expected, but it gives the game so much more. I’d recommend this game to anyone – but you may want to read a wiki of the first game first.

This Is The Police 2 is available on PC.