Despite Legion being the best World of Warcraft expansion since Lich King, I wasn’t overly excited going into Battle for Azeroth. That said, we’re now a few days in and it’s not disappointed me yet.

When a World of Warcraft expansion comes out like the new Battle for Azeroth, about two weeks of my life are absorbed into the game. Real life stops, and I become one with WoW; the memories I have of those two weeks solely involve the game. I could win a million pounds tomorrow and still go: “August 2018? Oh yeah, that’s when Battle For Azeroth came out”.

My short ventures into the Horde’s new continent, Zandalar, so far make me glad to be an Alliance player. I’ve been impressed by the visuals of all three Alliance zones in Kul Tiras, but I’m relatively unimpressed by their counterparts in Zandalar. Even with the main cities of Alliance’s Boralus Harbor to Horde’s Zuldazar, Alliance have the better city by far. More than anything, I just love the quaint, relaxed feel of the seaside harbour.

The levelling experience was one I, for once, took slowly. Looking back, I tend to rate each World of Warcraft expansion by how many characters I got to max level by the end. It’s not even been a week since my first 120 and I’m already looking forward to levelling another character –  Alliance or otherwise.

Activision Blizzard has put a lot of effort into cutscenes for this expansion – #TeldrassI’llNeverForget. The frequency of these cutscenes does wane towards the end of the levelling experience, and although some of them look rough with no real attempt to lip sync, there’s an added level of drama and urgency to the story of the expansion. I now hate the Horde more than I ever have, so that’s working out well I guess.

A full review from me of Battle for Azeroth won’t be until raiding gets underway a little bit. For now, it’s about gearing up through the dungeons on heroic and then mythic. I’ll be working my way through the levels of difficulty, too, in the new Expeditions – searching uncharted islands for new artifact power, Azerite Power, and collecting more than a group of the opposite faction for rewards. Since world quests make a return, I’ll also be running around doing those, as well as keeping on top of the follower mission system.

Battle for Azeroth is available now. We’ll have more on World of Warcraft‘s expansion in the coming weeks. 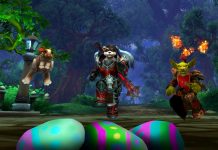 Easter’s Coming to World of Warcraft With Noblegarden