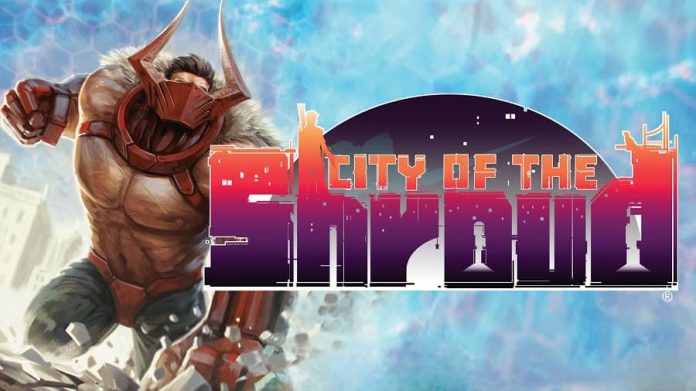 City of the Shroud is an ambitious RPG that adds a dimension of community storytelling to its tactical action gameplay.

Enter the world of Iskendrun, a city bathed in magic, torn by politics, and full of danger. From the first few minutes playing City of the Shroud, I felt like I had stepped into one of the classic and timeless RPGs of my youth: Final Fantasy VII, Wild Arms, or Darkstone. It’s something about the buoyant, colourful aesthetic and music that reminds you of those older titles, and the way they eschewed traditional narratives and experiences.

Immediately engrossing, City of the Shroud quickly plunges you into the action. Its combat system is in real time, unlike the turn-based titles of yore, and therefore extremely pressured. Abilities are performed using Action Points (AP), but it’s more than simply clicking a button. Players must enter a correct combo sequence on the character’s Combo-Wheel in order to pull off the ability. This makes the combat far more dynamic than simply picking abilities from a long list, if a little crazy at times. Multitasking is an essential skill in order to ensure you’re not obliterated by the demonic forces incurring on the city. In addition, tactically placing your abilities at different points on the ‘wheel’ can lead to some intriguing chains to maximise utility and damage. It’s a unique take on strategy or turn-based games, and it pays off.

Did someone mention demons? Yes, portals to demonic worlds appear all over the city, unleashing demons on civilians and soldiers alike. No one knows where these portals are coming from, though some whisper of a mage within the city, someone set against the political factions that have divided the city for so long. Or perhaps, more sinister still, they hail from one of the factions and seek to use the demons for the triumph of their faction over the others? This is the mystery at the heart of City of the Shroud, and it’s a compelling one.

Innovative though the combat is, by the far the most intriguing aspect of the game is the story. Each of the five factions has a point of view. Some of them co-operate. Some are deadly enemies. All vie for control of the city, and will stop at nothing to win. If this sounds a little Game of Thrones-esque, you’d be right, but it is done so well that it steps into its own league. 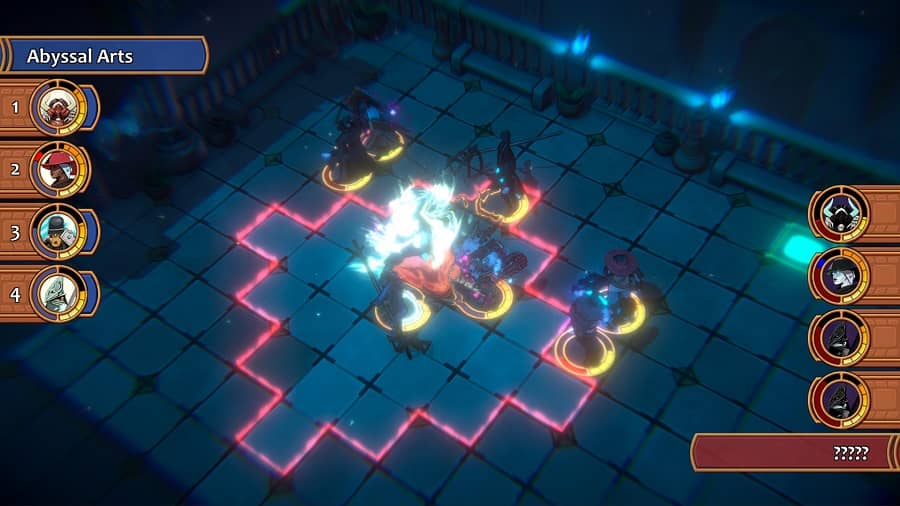 Author Moira Katson, who wrote such wonders as Crucible and Remnant, effortlessly brings the game’s dialogue and storytelling to life. She explores complex and timely issues, such as a refugee-crisis, class divide, religious freedom, inequality of wealth, and much more. Many of the lines are laugh-out-loud funny, especially those of some of the most unscrupulous characters in the city. The tone is overall pretty lighthearted for a demon-infested scenario, but that works with the game’s loving nod to classic RPGs, which remained optimistic at their heart despite desperate circumstances or even apocalyptic settings. I became fascinated by certain characters, hunting for more information about them.

As you make choices, ally yourself to certain individuals and causes, you can see the contribution your efforts make to the overall story. This will affect the second chapter of City of the Shroud. In other words, the things you do in game really matter. To give an example, I decided to join the largely unpopular and somewhat corrupt Priests. After a few hours of gameplay, I raised the percentage of Priesthood influence from 1.6% to 4.27%. I won’t stop until the city is in my thrall, and all the other braggarts and liars are forced to walk down the streets naked with me behind them shouting shame, shame, shame. Seriously, though, this is such a clever mechanic, and seeing the impact you make on the city really makes the game feel alive. 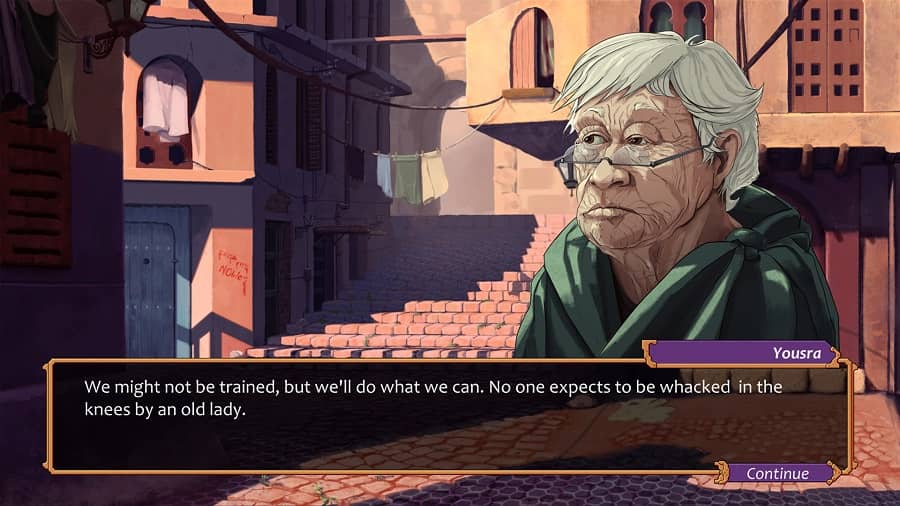 There are so many nice touches to City of the Shroud that make it work. The music, expertly designed by Chris J. Nairn, is electric, rewarding you with screaming guitar shreds upon a quest completed or victory won, bouncing jauntily along as you move about the city, simmering as you talk to the various inhabitants. The character artwork is beautiful, particularly for the main faction leaders: Navid, Zem, Azura, Sohrab and Omar, and the Big Hat Merchant – who, quite frankly, is one of the most mysterious and compelling characters of them all. Unfortunately, some of the character portraits are repeated for minor characters, which is a shame, but I can understand the limitations of creating such beautiful pieces. The team is small, and while City of the Shroud boasts impressive polish, it remains an indie game at heart.

City of the Shroud has a class system, much like any classic RPGs. Some of the classes here are more familiar, such as the Brute, who is essentially a big-knuckled brawler, or the Duelist, a gunslinger who knows kung fu. However, there are also some very unusual classes, such as the Priest Machinists, who can manufacture drones and heal players, or the Defenders, who carry a pair of Dark Souls-esque shields. 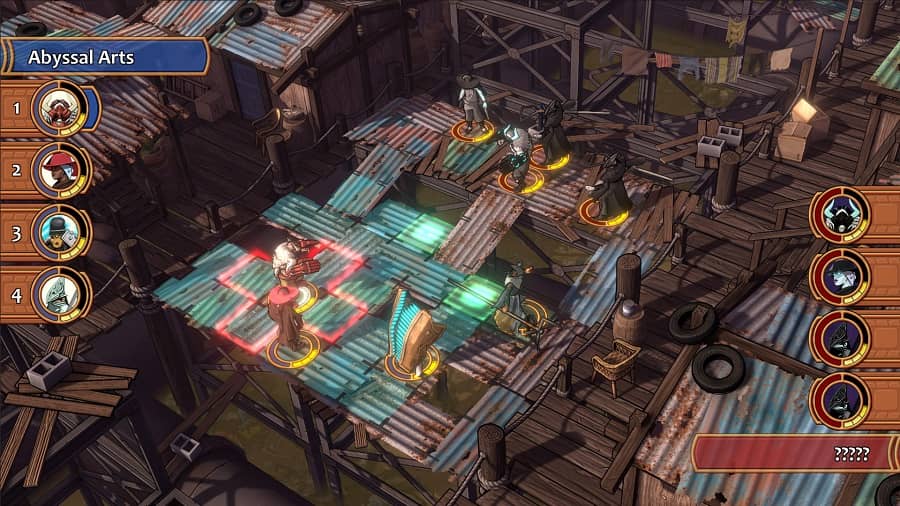 While I love the number of classes and the variations in their play style, something the team has clearly put an immense amount of work into (Keaton White’s Sega experience really shows, to his credit), I did feel that the limited number of character models takes away from some of the immersion. Though you can customise your team, it is made up of generic character models and not individuals you encounter in the story. There is no way to really customise anything about yourself as a player other than your name. The demons are recoloured versions of the various classes. And, as far as I’m aware, there are no unique character models for special boss fights (though their playstyle and abilities are certainly unique and challenging).

However, these are minor issues on the whole when you consider the incredible achievement City of the Shroud is. I first played it at EGX in 2016, when it was merely a sliver of early access content that showed massive potential. It’s a delight to see it has delivered on this potential – and then some. The combat is engrossing and frankly addictive. The aesthetic is beautiful and enchanting. And the storytelling is the crowning jewel of it all. Stephen King once said ‘Story is king’. City of the Shroud epitomises this approach, putting narrative at the heart of what it does, and emerging triumphant as a result.

City of the Shroud is available on PC.