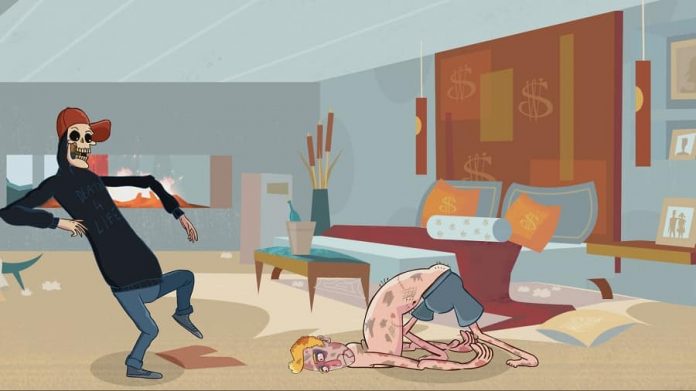 Now available on Nintendo Switch, you should really check out Manual Samuel if you like games that make you laugh.

Following the exploits of a douche called Samuel, who dies and then makes a deal with Death to return to the land of the living, it challenges you to perform simple tasks like walking, drinking a cup of coffee and brushing your teeth manually. Trust us, it’s not as easy as it sounds.

We absolutely adore the game, and so when offered the chance to send some questions over to its developer, Perfectly Paranormal, we bit hard. And what with their answers being so perfect, we thought we’d present them as is. So read on to discover what inspired the game, what got cut and what’s new on Nintendo Switch.

Manual Samuel proved to be one of the most unique titles of 2016. Did you worry about it finding an audience before it was released?

There were many times during the development of Manual Samuel where we stopped and asked ourselves: what the feces are we making?! Is anyone actually gonna play this? But we did a lot of testing early and learned that luckily we weren’t the only ones who thought it was funny. Initially we were aiming the game at adventure game fans but learned that more casual players, especially couples enjoyed the game as well. They would co-op the game on a single controller which inspired us to do an actual co-op mode.

But the short answer is yes. We worried a lot.

What was the inspiration for the game?

Fictional works that inspired the game story were Hitchhiker’s Guide to the Galaxy, Good Omens, Arrested Development. Games that inspired us were mostly Valiant Hearts and Bastion… go figure. The art style is inspired by old Hanna Barbera cartoons.

The game is also inspired by our own lives. We started working on it when we finished school and suddenly we woke up one morning having to do things like the dishes and paying taxes manually.

Was there anything that you wanted to put in the game but had to cut?

We were gonna have a level where you played as Death, skating. Since he is so bad at skating it was essentially as hard as being Sam. But like… we were like ok, this has nothing to do with the rest of the game. We still have that level that has nothing to do with Manual Samuel gathering dust somewhere. Who knows, maybe one day we will make a 2D skating adventure featuring Death.

What’s your favourite bit of the game? Were there any scenes that you particularly enjoyed creating?

So this is gonna sound wrong and offensive but there is a part of the game where something utterly horrible happens. We found it hilarious of course because we could imagine people’s reactions (don’t worry, everything works out in the end). One of our favorite activities is watching YouTubers with facecams react to that part of the game.

Some others favorite moments include: throwing Death, watching him throw up, trying to speak and the part with the salmon…

What was your reaction to the reviews that claimed it was offensive?

We realize that the game has crude and dark humour that some people may find offensive. The reviews claiming the game was offensive, however, found it offensive for all the wrong reasons. None of the offensive things they mention were remotely intentional and some of the more uh… controversial claims were just plain wrong.

With the game being released on Switch, is there anything new for us to watch out for?

Oh we have added some subtle details in some backgrounds hinting towards things to come. We hope people will obsess over them and speculate. That’s the dream at least. We are also shipping the game with some comics about Death, further expanding the universe and giving you guys a glimpse of Death’s everyday struggles. We also incorporated the uniqueness of the Joy-Con by allowing players to straighten Sam’s spine with a flick of the controller and of course having the split joy-con support for local co-op.

Did you encounter any difficulties porting the game to Switch?

We didn’t encounter anything that wasn’t expected. You always get difficulties porting a game and apart from the occasional swearing at the screen and jumping out the window, everything went swimmingly.

Finally, just how cool is Death?

Death is actually very uncool. But he is trying very hard to be what he thinks is cool. He barely has any friends in Hell so that is some of the reason why he won’t leave Sam alone. Sam is his new friend.

And one more, can anyone on the team do a Kickflip?

Death’s skateboarding tricks are actually directly based on our animator Ozan’s skating skills. He has skated since 2004 and can do a lot of things but he just can’t get the hang of the kickflip. Our coder Gisle on the other hand is a beast on skateboard. He can do just about anything on a skateboard. We had a talk once called Animations and Kickflips or something and it ended with him doing a kickflip on stage. He failed. But he can do it I promise.

Thank you to the fine folk at Perfectly Paranormal for answering our questions. Manual Samuel is available on PS4, Xbox One, Switch and PC.