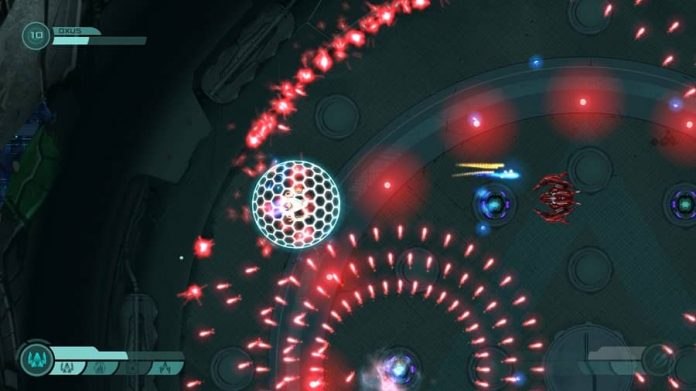 The shoot ’em up genre – or ‘shmup’, since we apparently can’t be bothered to pronounce words fully anymore – may be older than time itself (okay, it’s about 50), but that doesn’t mean there isn’t any more room for innovations to the format.

Defenders of Ekron, originally out on PC and PS4 last year, and just rereleased as a Definitive Edition earlier this month, takes traditional shmup gameplay and adds to it not only a narrative, but also RPG-style upgrades, open world exploration, and elements of puzzle and strategy.

The opening segment of Defenders of Ekron: Definitive Edition, which acts as a tutorial, feels unlike any other shmup I’ve ever played. Sure, you take control of a small flying craft, and from a top-down view, you can shoot bullets in any direction. So far, so shmup. But presented with a Binding of Isaac-style map, you need to make your way through several rooms, solving unique puzzles and defeating particular enemies in each one. With three paths given to you, each utilises just one of your skills – your regular shot, your special shot, and your shield. The idea is to learn how each skill works, and to use them in clever ways in order to best each room.

It’s a lot of fun, but ultimately, it’s only the tutorial. Thrust into the game proper, Defenders of Ekron is more open and level-based. And with all three of your skills at your disposal, it’s more all-guns-blazing than it is careful consideration.

Being careful with your bullets is still an important skill to master though. While ammo is unlimited, your gun’s charge is not, and should you be too trigger happy you’ll soon find yourself with no power left to shoot or to shield yourself. It only takes a few seconds for you to gain charge again, but those few seconds could be all it takes for an unavoidable enemy attack to wipe you out. 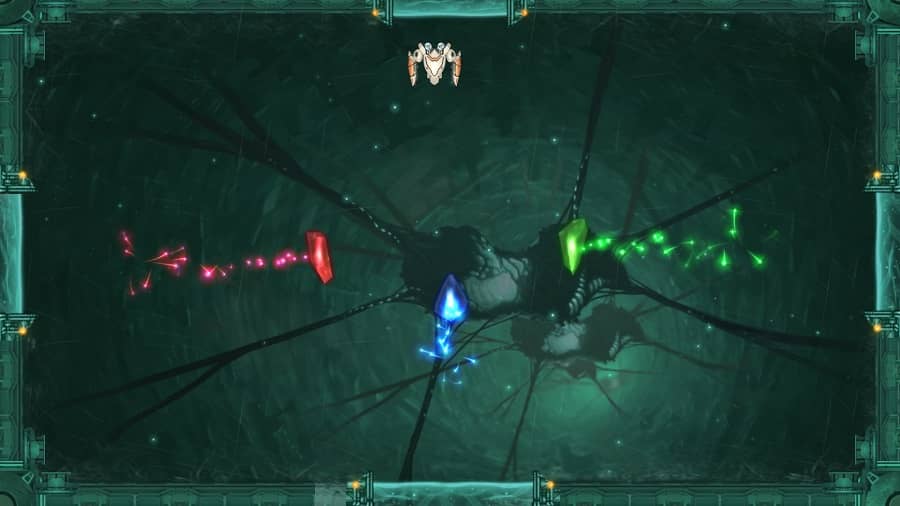 Missions in Defenders of Ekron come in a number of shapes and sizes. Sometimes, you’ll simply be going out to shoot every enemy who dares cross your path. Other times, you’ll be exploring large areas, uncovering important pieces of data. You’ll usually be out there on your own, but occasionally, your computer-controlled team members will come along; they tend to show off and save your ass from destruction, playing into the game’s basic but engaging narrative about teamwork and rivalry.

Whatever mission you end up on, combat is of course a major part of it. Small fry tend to fire easily-dodged projectiles and will be defeated with a few measly bullets. The bosses, however, are the true spectacle of Defenders of Ekron: Definitive Edition. Like true shoot’em ups of old, their attack patterns will keep you on your feet, always anticipating the next attack. You’ll be able to squeeze in a few attacks in between, but dodging and staying alive becomes your main priority.

Your shield function is absolutely necessary, as the hulking mechanisms you face off against often release attacks that are impossible to dodge. Instead, keeping enough charge for your shield so you can let attacks pass over you, unscathed, is key to success. Not paying attention to your charge meter and health level is a sure-fire way to fail; both will drain surprisingly quickly. 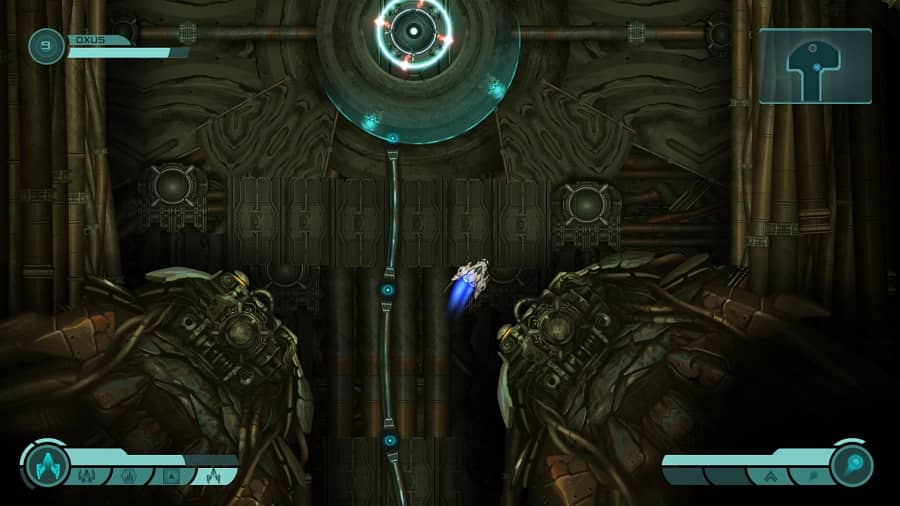 Half Giger, half drab

In terms of its visuals, Defenders of Ekron: Definitive Edition isn’t the most inspired game out there. Some locations are full of atmosphere; mechanical and metallic space station-like environments have a distinct Giger vibe about them. They’re subtle and subdued, but stylish enough to draw you in. Going into new locations feels eerie and tense; you don’t know what’s waiting for you around any corner (spoiler: usually something that wants to shoot lots of bullets at you).

On the other hand, other locations are incredibly bland. Open, exploration levels are masses of brown; sandy plains with no real distinction apart from the odd potato-printed detail. Thankfully, colourful displays of bullets and projectiles help keep the most mundane of environments from being too dull, but it’s a shame there isn’t more parity between the different kinds of locations. 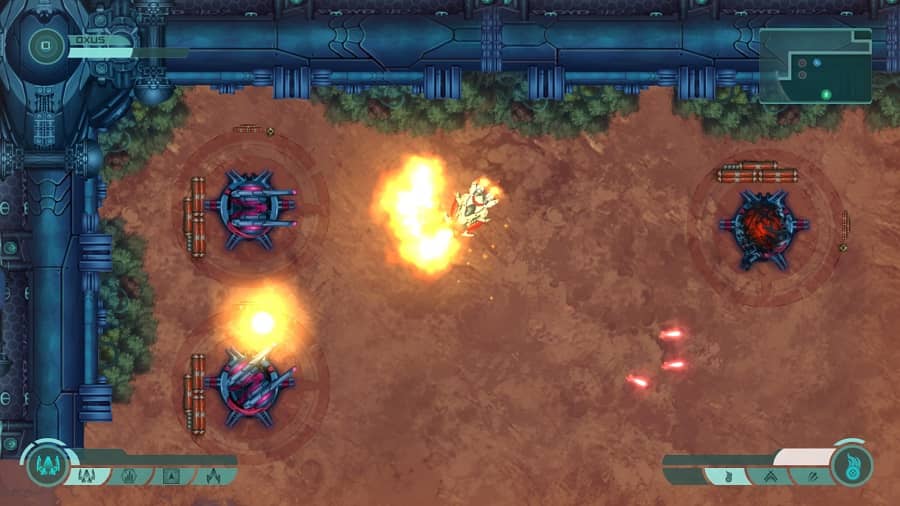 If you’ve already played Defenders of Ekron, this new Definitive Edition perhaps doesn’t bring enough new into the fold to warrant a double dip. It does mean, however, that the game is available on PS4 in Europe for the first time, and on Xbox One.

There are a few noteworthy additions though; a new level to the game’s campaign, a new boss rush mode, and a retro-styled version of the game, Invaders of Ekron. Playable via the game’s menus, Invaders of Ekron takes the same controls and ideas from the main game, but turns it into a classic upwards-scrolling 8-bit shoot’em up. Devoid of levels and story progression, Invaders is just about chasing a high score, but it makes for an enjoyable diversion from the main campaign. Boss rush mode isn’t available until you’ve completed the game, but allows for a score-based test of your skills as you face off against each boss consecutively. They’re minor additions, all things considered, but offer some welcome longevity to the game.

Perhaps Defenders of Ekron tries to squeeze quite a lot into what should be a simple genre, but when it all comes together, it mostly works. The mixture of level types helps keep the game varied and entertaining, and the frequency of impressive boss battles means slower moments never last for too long. It’s a respectable addition to the shmup genre, and if you have yet to give it a go, Defenders of Ekron: Definitive Edition is definitely the way to go.

Defenders of Ekron: Definitive Edition is available on PC, PS4 and Xbox One. We reviewed the Xbox One version. 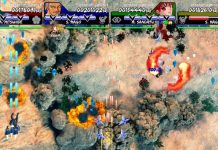