Released way back in 2013, Zoink Game’s Stick it to the Man was a hilarious puzzle platformer hybrid.

Following up with an equally funny side scrolling beat ’em up called Zombie Vikings and the ambitious platformer Fe, Zoink has returned to its roots with Flipping Death; a game that for all intents and purposes could be considered a spiritual sequel to Stick it to the Man.

In Flipping Death you largely play as Penny; a woman who finds herself face to face with Death after larking around in a mausoleum. Mistaking you for someone else (or did he?) Death bestows his job upon you while he goes to the moon for his jollies, leaving you to carry out his underworld duties. But of course, complications arise, and you soon find your new job to be much more trouble than you bargained for.

As the Grim Reaper, you have a range of supernatural powers. Your iconic Scythe enables one of them; the ability to warp to it wherever it is thrown. The most useful of your newfound abilities, however, is that of possession. As in, you can possess anyone in the land of the living and make them do whatever you want them to do. Oh, and you can read their minds, too. 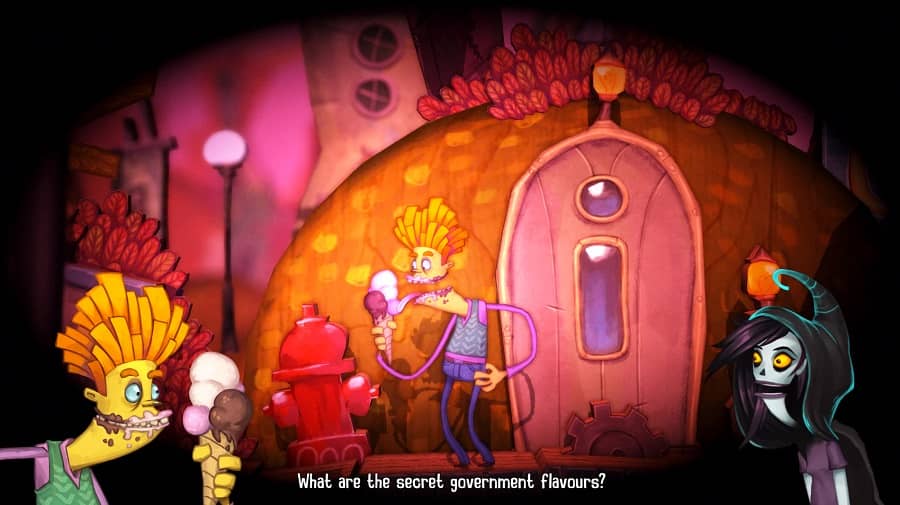 Each and every person you can possess in the land of the living has their own little quirks and skills. The fireman has access to a foam-squirting hose, for example, while a man with expandable arms is handy for reaching far away switches. Sometimes, possessed people can be united with items to bring out their abilities too, like a little girl who gains the ability to float by chewing gum. So, with a range of objectives to complete, it’s up to you to possess the living folk in each chapter to find a solution to your problems.

Most of time, things are fairly logical. Need to get a cat to run? Why not present them with a dog and they’ll soon get moving. There’s a mermaid that wants a chainsaw? It’s handy that there’s a pushable cart full of waterproof chainsaws in town. Sometimes though, what you need to do to progress is a bit more obscure. At these points you’re likely to be switching between the lands of the living and the dead with regularity, possessing everyone and taking them everywhere to see if something clicks. If you’re not that patient, however, there’s a hint system in place to give you helping hand. And you’re not penalised for using it, either.

Running through Flipping Death‘s story is likely to take you just under ten hours. Doing so while completing all of the optional challenges within each chapter is likely to take you much longer though. They encompass silly activities like pooing on characters as a bird, or putting out numerous fires. And you don’t need to start from scratch if you miss one; there’s a handy chapter select so you can jump to whichever one you’ve got unfinished work in. 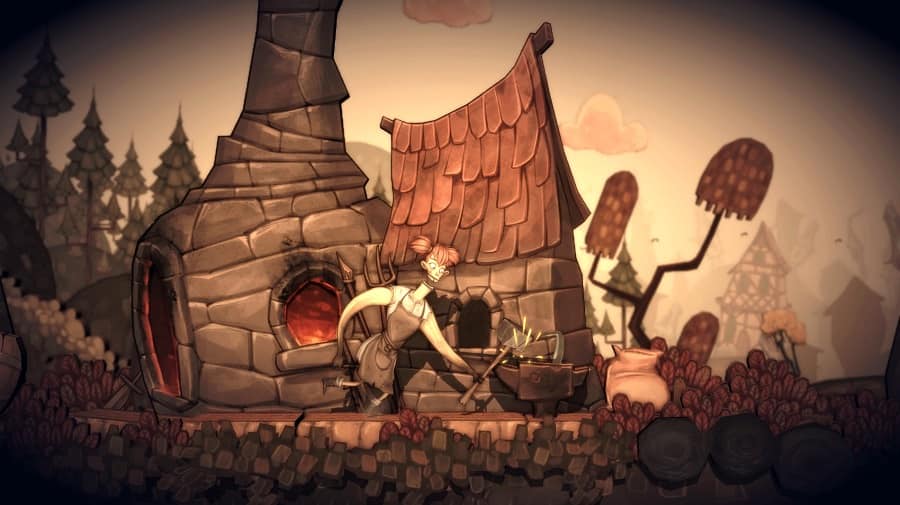 Like Stick it to the Man, Flipping Death‘s biggest assets are its humour and its brilliant art style. It will have you laughing from start to finish, and its outlandish characters simply look brilliant, especially at 4K on Xbox One X. The land of the dead doesn’t impress that much, but the land of the living is colourful and vibrant, making it a pleasure to explore.

Unfortunately, Flipping Death‘s gameplay does have some issues. The camera is one of them, sometimes zooming in when it’s not really ideal. Platforming isn’t always great either, with Penny jumping repeatedly as long as the jump button is pressed rather than waiting for you to press it again. It’s not always a problem, but when jumping to platforms that are above you, it’s not unusual for your character to needlessly jump again. The worst of Flipping Death‘s ills though, are its physics, which sometimes just go a little bit mental when you’re trying to complete a task. Unless you’ve got patience, sometimes you might be tempted to just give up.

But despite all of its problems, there’s just something about Flipping Death that wins you over. The combination of puzzles and platforming is a winning one, especially when served with lashings of humour. Expanding upon the mechanics first introduced in Stick it to the Man, there’s nothing else quite like Flipping Death out there, making it a compelling adventure for gamers that like things out of the ordinary. Plus, how often do you get to play as Death?

Flipping Death is available on PS4, Xbox One, Switch and PC. We reviewed the Xbox One version. 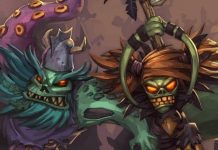