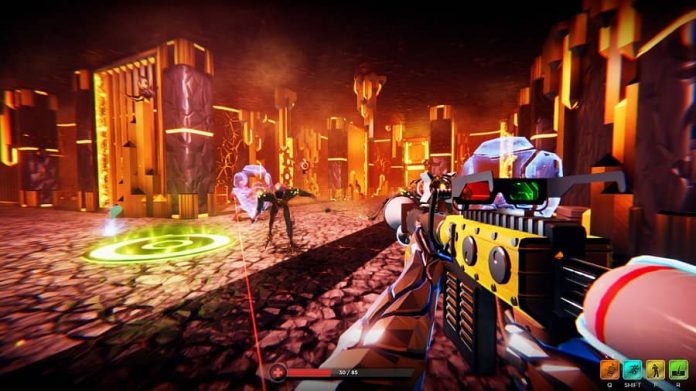 Being an intern is the worst.

Everyone expects you to do their job for them, and DevTech is no exception. So what if aliens have started trying to kill the human race? You’re definitely not getting paid enough to deal with it. Although, it would be cool to run through the simulation on your own terms without the boss badgering you about your imperfections. Maybe just one go. Or two. Just enough time to improve the hypergun. Just enough time to get it right.

Hypergun is a rogue-lite first person shooter from NVYVE Studios. And it’s hard. In Hypergun, you take on the role of Dewey Owens, an intern at DevTech Labs. DevTech is a company tasked with creating the ultimate weapon for alien annihilation, and as an intern, you’ll be thrust into a simulation environment, tasked with testing weapons. The simulation will throw wave after wave of enemies at you while you try to stay alive, perfecting the hypergun as you go. Throughout each level you’ll pick up attachments for the gun, as well as coins and bits to upgrade yourself or buy health, shield, and more.

Hypergun has a variety of enemies that you’ll encounter during your simulation runs, and you’ll definitely have to get creative in order to figure out the best way to defeat them. There are fast aliens that will sprint after you with swords in hand, ready to slice. There are also snipers, large shield carriers, and flying aliens to name but a few. After you’ve learned how to get rid of them, the simulation begins to feel a bit stale simply because it takes a few dozens runs before you’re able to move on. In order to unlock new areas you first have to beat the current level’s boss, which can be extremely difficult depending on the type of hypergun you’ve managed to build. 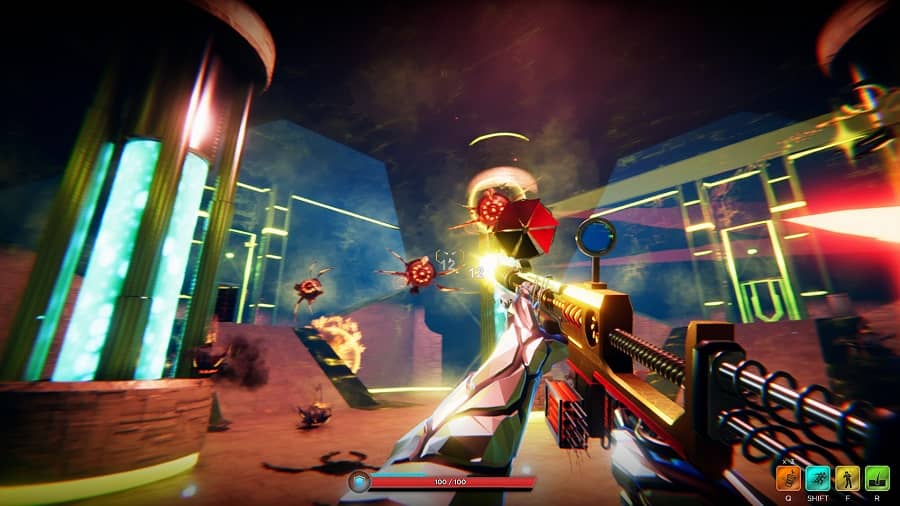 One of the more frustrating parts of Hypergun is its upgrade system. Dewey is able to upgrade himself to three different classes a well as upgrade parts of the hypergun. In order to do this,  players must save up Hypercoins. Unfortunately, much like a lot of the items available in Hypergun, Hypercoins are few and far between. The most I ever collected on a run was three and, for example, the lawyer class selection costs 50 Hypercoins on its own. It probably took ten simulation runs before I was able to buy the cheapest upgrade for my gun. Players will have to choose to save or spend the coins because they won’t be finding them all over the simulation.

During the simulation, players will also pick up ‘bits’. Bits can be used to purchase things like health, shields and keys to chests. However, much like Hypercoins, bits seem to be a rarity, so don’t rely on finding enough to replenish your health when you need it.

It isn’t just the currency that Hypergun is stingy with, either; any items that are used to help Dewey during the simulation are hard to find. Health shows up in something like one in every ten rooms, so if you had a particularly difficult room with lots of enemies and the boss is next, you probably have no chance of defeating it. On average during a run you may pick up one pack of extra health, one pack of extra shields, and one add-on attachment for your hypergun. The lack of supplies makes Hypergun more of a high frustration game than a high difficulty one. 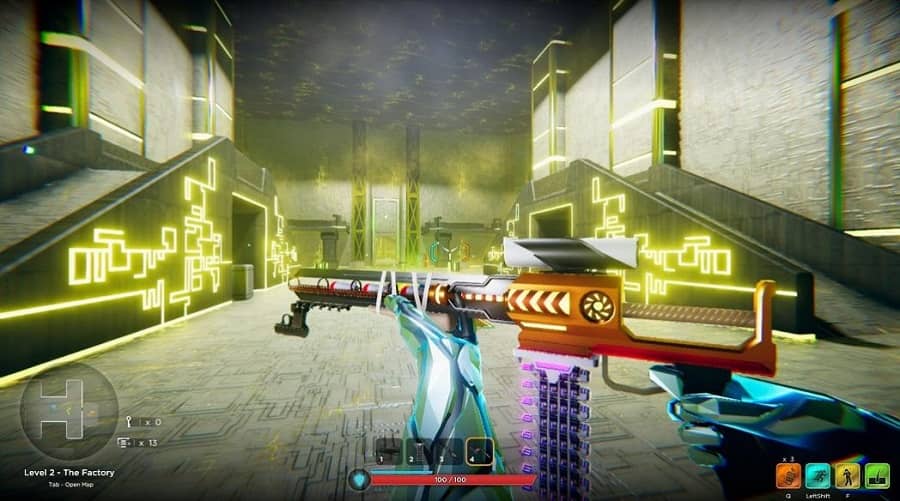 An Average Office, A Silly Shooter

Looking past its underlying issues, though, there are plenty of places where Hypergun shines.The game’s  techno soundtrack really adds a layer of fun and excitement that you wouldn’t necessarily expect. As you walk into the DevTech Labs, you’ll find an empty office, but there are still hints of the people that should be there. Dewey will find notes or read emails from bickering employees or notes on ways to improve the simulation. This was a very clever way to add a story to a genre of usually story-less shoot-em-ups.

Perhaps the best part of Hypergun as a whole, though, is the hypergun itself. You’d hope so, seeing as the game is named after it. Tacking on questionably useless additions to your hypergun just to see how they work is surprisingly enjoyable. By the end of it, you won’t even be able to see your old hypergun underneath everything  you’ve attached to it. Thankfully, there’s a button solely dedicated to just looking at your gun so you can freely admire how ridiculous you’ve made it. The ludicrous upgrades, like the one that shoots out another gun which also shoots bullets, really help add a layer of entertainment and fun to Hypergun.

When all is said and done, Hypergun is far from perfect. You’ll probably encounter one or two glitches during every run,  like an enemy getting stuck in a corner, or falling through the floor. I also wish it wasn’t so stingy with its item giving so it was possible to beat the simulation in less than 5,000 tries. But it does do a lot of things right. It looks and feels like a mix between Doom and Superhot, and the sheer amount of customisations available for the hypergun alone are well worth playing a few hours for, just to see what you get. With a few more health packs and cheaper upgrades, Hypergun could be an excellent game. As it stands now, it has a few enjoyable features, but unless you’ve got the patience of a saint it’s probably only  trying if you love the rouge-lite genre and are looking for something unique and new.

Hypergun is available on PC.