Developed largely by one man and his son, Jump Gunners is one of those games that I wanted to love from the outset.

In truth, however, you don’t need to know who developed Jump Gunners, or how, for that matter, to quickly come to the conclusion that it’s a hell of a lot of fun. It’s simple but challenging, and while its visuals won’t be pushing the power of your Xbox One, they have a certain charm. In fact, aesthetically, Jump Gunners reminds me of the original Worms. Ah, good old Worms.

There’s no turn-based action here though; Jump Gunners is all about real-time running, gunning and jumping. In single player there are 24 challenges for you to go up against, testing your abilities to find and eradicate a number of targets quickly and efficiently. And I really mean that. Each challenge has three stars to be earned: one for completing it without killing yourself, one for doing it in a set amount of time, and one for using less than a specified amount of ammo and grenades. You don’t need to fulfil any of these rather strict requirements to progress to the next challenge, but if you want to push yourself to the limits of your ability they will surely do that. Honestly, they really will.

Equally fun and challenging is Jump Gunners‘ Duck Hunt mode. Essentially a wave-based shooter, in each round you have three bullets with which to shoot two ducks that fly across the screen. Shoot both ducks in any given round and you can give yourself a good pat on the back. Shoot one duck and you’re simply good. Fail to shoot either of the ducks, however, and you get a mark against you. Accumulate three marks and your time is up. Just how many ducks can you shoot before ducking out, that’s the question? You can also play Duck Hunt in local multiplayer. 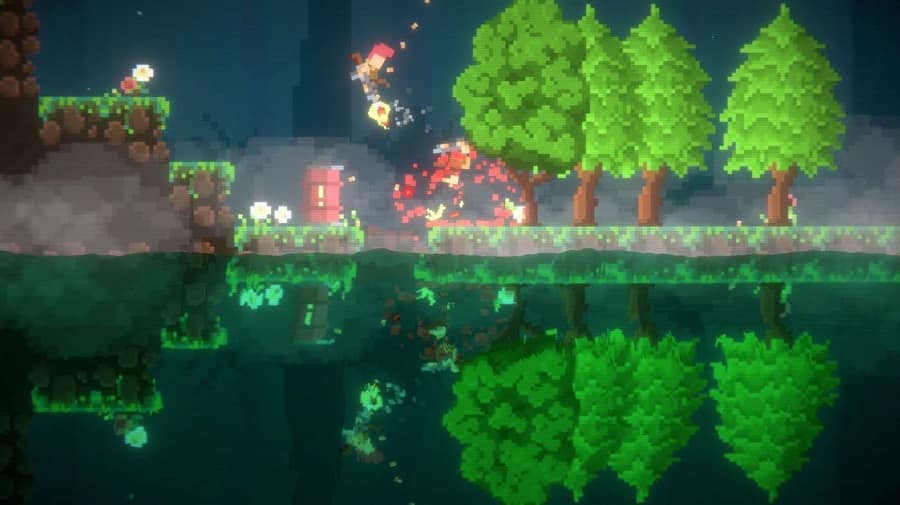 Shoot to the sky

The last of Jump Gunners‘ single player modes is Horde, which can also be played in local multiplayer. Placed onto a small map, it challenges you to dispatch enemies that endlessly warp into the environment. Aside from watching out for their attacks, you also need to watch out for exploding barrels, however. While they are handy for taking out multiple enemies at once, if you get caught in the blast your days will be numbered.

No matter which mode you play, what makes Jump Gunners so utterly addictive is that its controls are crisp and responsive, and the action is fast-paced and just fun. As its name suggests, jumping and gunning play a major role in the gameplay, but it’s how they are combined that makes the experience magical but also tough.

While you can jump, double jump and even climb up certain walls, Jump Gunners will often require you to reach places that even those skills won’t help you with. The answer? Shoot your gun downwards. Whether you’re stood on the ground or jumping in the air, firing any of Jump Gunners‘ many guns in any direction will send you reeling the opposite way, enabling you to fly majestically in the air once you’ve mastered the controls. Until then, you’re likely to just find yourself landing in water a lot. 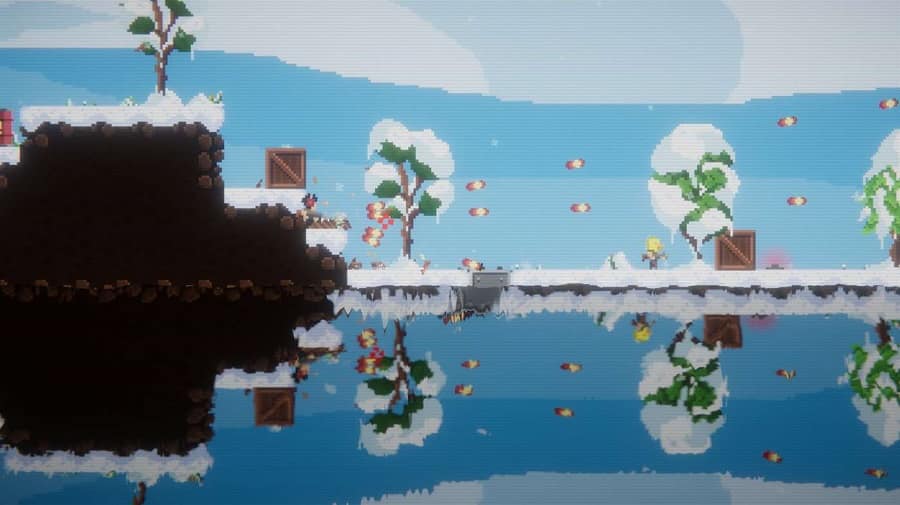 Get your friends around

In single player, using your gun to efficiently move around will be a huge source of frustration until you’ve really improved your skills. Completing challenges and taking the fight to your enemies in horde mode will have you howling at the screen. Get some friends around (up to three of them) to partake in Jump Gunners‘ local multiplayer modes, however, and those howls of anguish will turn into howls of riotous laughter. In multiplayer, Jump Gunners is like Worms crossed with Contra, with players battling it out to assert their dominance. All the while, laughing with huge grins on their faces due to how ridiculous it all is.

In addition to the Duck Hunt and Horde modes I mentioned earlier that can be played in single player or local multiplayer, there are an assortment of modes that are strictly multiplayer only. Well, I say that, but Deathmatch and Team Deathmatch can also be played with bots instead of humans. As you’d expect, all of Jump Gunners‘ modes that allow for multiplayer are best when played with real people though. And perhaps the highlight of Jump Gunners is its Capture the Flag mode, which can only be played with actual humans by your side.

Available now for just £9.99/$12.99, Jump Gunners probably isn’t the best game to pick up simply for its single player features. For those who like to get some friends around and engage in some highly entertaining multiplayer action, however, I’d say it’s a must-have. Easy to pick up yet hard to master, it’ll offer many hours of madness for you and your friends. Just try not to fall out with each other as you blast your way to victory, okay?

Jump Gunners is available on Xbox One and PC. We reviewed the Xbox One version.