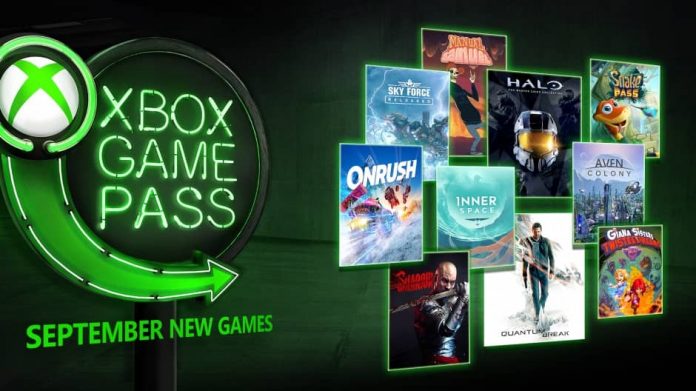 Hoo boy, September is a good month to be an Xbox Game Pass subscriber, with ten new games being added.

And most of those 10 games are excellent. Heading up the lineup is Halo: Master Chief Collection and Quantum Break, both of which will land on Saturday, 1st September. While both pretty old releases now, they’re both major releases for Xbox One, so it’s great to see them added to the Game Pass library.

Also joining them on 1st September is Manual Samuel, a hilarious indie game about making a deal with death that we absolutely love. In fact, we recently did an interview with the game’s creators. Equally excellent is Shadow Warrior, also landing on Saturday. Join Lo Wang on his first sword-slashing, gun-firing adventure. You won’t regret it.

For me, though, the cherry on top of September’s new games has to be Onrush. We’ve written about how much we enjoy this game, and to see it added to Xbox Game Pass makes me very happy. It’s struggled to find an audience, so hopefully it will now find the success it deserves. Onrush will be available on Game Pass from Wednesday 5th September.

Here’s the full lineup of games coming to Xbox Game Pass in September:

Remember, Xbox Game Pass games are only available to players who subscribe to the service. You can grab a six-month membership from Amazon.