2Standing in as a TV Show Producer

Apparently, Kiryu’s overbearing presence makes him a great stand-in for a producer gone astray in one of Yakuza 0’s side missions.

You have to try and fool the eccentric director that you know what you’re doing as you’re asked to do tasks via jargon that you probably won’t comprehend. But don’t worry, rest assured things will work out fine if you make a bit of a fool out of yourself. The crew will just be happy that you’re handy with your fists in the end. 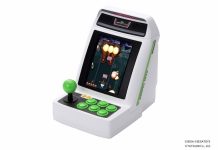