Another week, another round up of all the games we’ve been playing as we slowly encroach upon our ultimate demise.

Okay, so perhaps that’s a little dramatic, but then what’s life without drama? Uneventful, that’s what it is. And playing games is never an uneventful thing unless what you’re playing is really rubbish. In that case, you should have been keeping an eye on our reviews to avoid that piece of turgid trash. It’s all on you.

Anyway, here are the games we’ve been mostly playing this week. Ahem.

Rich: Rebellion’s Strange Brigade is the game that I’ve enjoyed playing the most this week. Me and Kim took our time going through its campaign in co-op and found it to be an absolute riot. It has got a great mix of shooting and puzzling that we really didn’t expect, and I’m sure it’s a game that we’ll both keep going back to in the future. Although it’s just as much fun when played in single player. Other than that, I really liked half of The Messenger, and had some fun as the scantily clad Solange in Blade Strangers.

Kim: Yep, like Rich says, I’ve very much enjoyed playing through Strange Brigade‘s campaign mode. Pretty much every element of the game is wholly enjoyable, but I got a massive kick out of its characters, particularly Lancashire lass Gracie. So she might be on the wrong side of the Yorkshire/Lancashire divide but it’s still incredibly entertaining having someone that Northern in a video game.

I’ve also had a wee pop on Spectrum, a basic but fun puzzle game that involves working your way around simple levels, racing against the clock and avoiding obstacles.

Alec: It’s been a pretty hectic week so my gaming has been restricted to bursts of FIFA 18. While I can’t wait to play 19, 18 offers a slick, compelling game of virtual football that I can’t help but get sucked into. Aside from a brief foray into career, I’ve been playing Ultimate Team, pitting my squad against others from all over the world to earn coins and packs containing new players. There are always the same niggling issues, the cliché-ridden commentary being the most notable, but FIFA is always my go-to game when I get a spare 20 minutes.

Becca: This week I’ve played a few hours of Overwatch since Blizzard launched D.Va’s Nano Cola Challenge this week. Winning games in Quick Play, Arcade, or Competitive mode unlock some really cool D.Va cosmetics including a new Epic skin so I had to play of course! I’ve also picked my Nintendo Switch back up and started playing a new game of Stardew Valley. This time around I’m focusing on crops as last time I focused on animals. I’m planning on having a big, impressive farm by the end of my first year.

Finally, I picked up a mobile game called Good Pizza, Great Pizza. It’s a restaurant simulator where you make pizza for customers who aren’t exactly specific about what they want. Someone might ask for “No cheese on half of my pepperoni pizza and make it well-done” or “Two pizzas with half pepperoni and no cheese on one half.” It’s a fun and interesting concept for a mobile game and something that’s great to pick up to pass twenty or thirty minutes when you’re bored.

Chris: I’ve been playing way too much Graveyard Keeper, a game that has fast become my own grim Stardew Valley. As a responsible Graveyard Keeper, my keeping skills now extend to selling human flesh to the local pub and turning the deceased’s skulls into amusing ornaments. I’m also furnishing a Lovecraftian altar under my mortuary, so it’s all go.

I’ve also been tackling TerraTech which is a rather excellent game where you construct vehicles from blocks and other handy parts. I’ve spent a good part of the week trying to build a tank shaped like an arse, to varying degrees of success. You can read about my bum-based endeavours here.

Jack: It’s been another week almost entirely devoted to World of Warcraft. Gearing up is going well and I almost have another character to 120, my Monk, in case Patch 8.1 doesn’t improve the feel of Elemental Shaman. Raiding is out next week so I’ve been trying to prepare myself for that in gearing, flasks and feasts – though this is mostly just so I can sell them.

I had a quick go on Two Point Hospital, and I’ll be playing more of in the coming future. I have more memories of Theme Park than I do of Theme Hospital, but Two Point Hospital seems to have kept the humorous side to these games. My first hour was consisted mostly of shouting at my staff who wouldn’t deal with their needs. It was a bit frustrating dragging my janitor into the toilet and shouting “just have a s*** you f***!!”. Turns out you need to send staff on break for them to go to the toilet. So far I haven’t received a complaint to HR from that janitor.

Kyle: Earlier this week you might have caught our review of Dragon Quest XI, so without much surprise, I’ve continued the game for the majority of this week. A little over a hundred hours in, I’ve continued to reaffirm my own love of the game as I push closer towards its true ending, which involved quite a bit of busy work to complete, but I’m still having a lot of fun.

Other than Dragon Quest, I’ve been playing through more of the Mega Man X Collection, specifically the later games. I wrote a bit about how familiar I am with the original Mega Man X already, but the same feeling stretches through the first four of the X series. So, in an effort to familiarise myself with the later and less interesting games, I’m replaying Mega Man X 5 and 6 for the first time in years while also trying out X 7 and 8 for the first time ever. Surprisingly, as I’ve often been told, 8 isn’t too bad! But I’m still only an hour in. Who knows where it will go from there, but it’s nice to play a Mega Man X game that I don’t know inside and out again!

Matt: I’ve been splitting my time fairly evenly this week between exploring the new changes with the 2.0 Patch in Destiny 2. The game feels more balanced and as a player, I definitely feel more powerful which I’ve been waiting for for a while now. Apart from that, I’ve been absolutely loving Dead Cells. This game is a gem through and through. Each run is exceptionally fun, and the amount of unlockable items and little tricks to discover seem endless. A must-play in my opinion.

Stan: This week I’ve been hitting the roads down under once more in Forza Horizon 3. Writing about the awesome Halo-inspired showcase for Forza Horizon 4 made me want to get back into the festival season early. I’d forgotten how great Forza Horizon 3 is! Not just because it’s a brilliant racing game, mind you. It makes me feel like a king. No matter what I do the game praises me! Miss a corner and go off road? Points for off-roading. Badly time a swerve and end up screeching across the street? Points for an ‘extreme’ drag. And Kiera, she’s always got my back. Forza Horizon 3 is the pick-me-up that never stops giving.

While away from the roads Down Under, I’ve also been playing and reviewing Castlestorm. What a game! It may not have a huge 50 hour plus story, but that doesn’t matter. Castlestorm’s battlefield can be just as frantic as any other game around. I really enjoyed building my own castle (although those inside did not enjoy the consequences of my ‘architecture’). Plus there’s farting sheep as dangerous projectiles. What else do you need? Maybe Forza Horizon 4 could have an upgrade using farting sheep to give your car that extra bit of power? You heard it here first people. 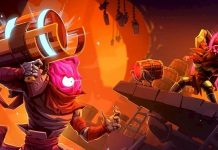