From Exe Create and Kemco, Fernz Gate is a retro-styled JRPG that’s just released on Switch and Xbox One.

Originally a mobile game, Fernz Gate isn’t much to look at, but don’t let that put you off. Its 2D top-down visuals are very reminiscent from RPGs of the 90s, but with some great character art and a story that grabs you right from the very moment you press ‘start’, it’s certainly worth taking a look at.

I recently played the first 30 minutes of the game, and you can see how I got on in the video below. It’s a bit of a slow start, introducing you to the primary characters and taking you through some brief tutorials. But once given control of Alex, the protagonist, and his initial companions, Lita and Toril, the world of Fernz Gate slowly opens up.

Alex is from another world, and mysteriously finds himself in Fernland with no idea how he got there. Lita’s story is much the same, but thankfully, Toril was there to greet both of them on their arrival and ensure their safety. Taken to the nearest village, you’ll meet the townsfolk who’ll prepare you for the dangers of Fernland. Monsters roam the wilds, and while you’re advised to keep safe in the village, obviously that’s not going to happen.

The opening 30 minutes only sees us meet a few enemies, but combat is a traditional turn-based affair, with standard and special attacks, consumable items, and the equivalent of a limit break. 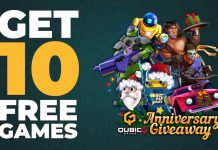