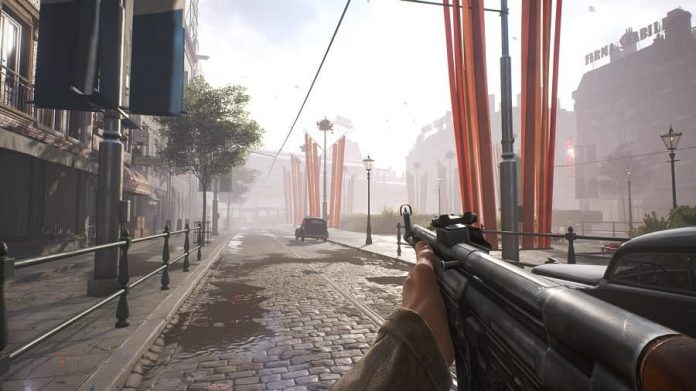 Playing the Battlefield V open beta, I was elated to experience a feature that EA and DICE hasn’t yet mentioned in its marketing for the game: your character’s mental state being crushed by the war going on around them.

I discovered this ground-breaking new development while playing a game of Conquest on the Narvik map. Having already committed many atrocities myself in the pursuit of capturing control points, I spawned on a tank after having my own life brutally ended. Within seconds I’d taken yet another life, then I ran for cover in a nearby building to assess the situation.

Peering out of what probably used to be a window, it was then that I couldn’t quite believe my eyes. Questioning what I had just seen, I aimed down the sight for a second look. Incredibly, my eyes weren’t deceiving me – there really was a corpse suspended in mid air; the body bent back as if being summoned up to the sky. I just had to get closer to investigate.

For a moment the war going on around me didn’t matter. What I had seen was akin to a miracle, making it momentarily the only thing I cared about. Explosions sounded off around me, but I pushed on. The next thing I knew the body was there, right in front of me. But then it vanished.

Was what I had seen real, or just a figment of my imagination? I wasn’t quite sure, but I couldn’t dwell on it for long. Spotting an enemy in front of me, I snapped out of my daze and once again stepped back into the fray. My character may have been horrified by the war, but the machine rages on.

Of course, what I had seen wasn’t a miracle or a new game feature – it was just a glitch. Quite a funny one though, and one that really did make me question what I was seeing. Make sure you download and take part in the Battlefield V open beta when it starts tomorrow to experience the grand battles that it is set to offer. Hopefully without any floating corpses.