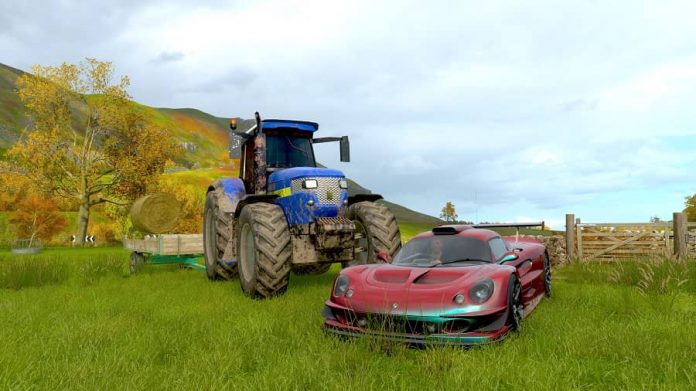 How do you improve upon perfection?

That’s what I was left wondering after the release of the phenomenal Forza Horizon 3 just two years ago; a title that somehow got even better when its two expansions landed and then also became Xbox One X enhanced. It seems like developer Playground Games knows the answer: simply make something bigger and better; raise the bar; push the limits. And that’s what they’ve done with Forza Horizon 4.

Forza Horizon 4 starts with a grand introductory event just like its predecessors. There’s one major difference though: it takes place over four seasons. In a matter of minutes you’ve switched between multiple vehicles, raced on and off-road, soared through the air, and experienced spring, summer, autumn and winter. It’s exhilarating and scenic; two words that pretty much sum up the entire Forza Horizon 4 experience.

The introduction of seasons is perhaps the most talked about aspect of Forza Horizon 4 prior to its launch, and for good reason. Not only does each season look jaw-dropping in its own way, but it brings gameplay ramifications too. In winter, for instance, many bodies of water freeze over, allowing you to access new areas. Also, everywhere gets a bit slippy. It definitely makes sense to get yourself in a 4×4. In your first five hours or so with Forza Horizon 4 you experience all four seasons more extensively than in the intro. Let loose in the game’s rendition of the UK, you’ll complete events in different disciplines and complete PR stunts, bringing yourself ever closer to being a true Forza Horizon 4 participant.

With each season that you complete, more and more of the game’s online features will open up, until finally you’re part of a shared, synchronised world. From then on, the season changes weekly for everyone. And along with the visual changes and minor gameplay tweaks, each new season also brings with it a handful of new events and PR stunts. Although don’t worry, if you miss a season, you’re not going to miss out on any content; the seasonal events are merely existing events with additional rewards for meeting specific objectives, like completing them with expert drivatars. Or at least they are at the moment, anyway. 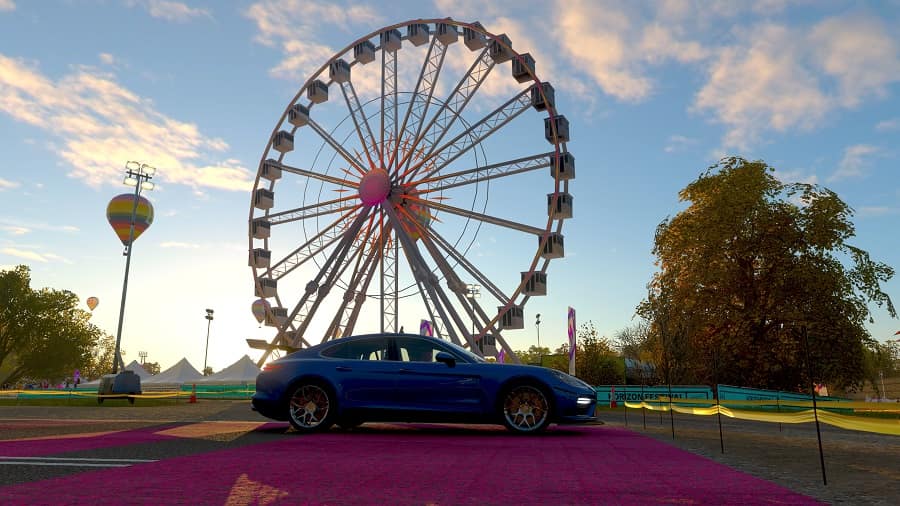 I guess to some that may sound like the seasons feature is little more than a gimmick, and it’s understandable. It’s a pretty spectacular one though; one that makes the world feel more alive and keeps it interesting. Also, restricting entire events to specific seasons would go against Forza Horizon 4’s ethos of allowing players to have fun and progress whenever and however they want. And trust me, Forza Horizon 4 certainly pushes the envelope in that regard.

If you think that Forza Horizon 3 had more than its fair share of content, you haven’t seen anything yet; Forza Horizon 4 is huge. It’s up to you to gain influence and progress however you please, with more events opening up in each discipline as you make a name for yourself in them. From street racing to cross-country events to drag racing, it’s all here for you to enjoy at your leisure. And then you also have story events that let you become a stunt driver, a drifter, a car rental business owner, or drive for a streamer. There’s so much to do in Forza Horizon 4 that it’s unreal. Even actions that don’t involve you racing like a maniac, such as taking photos and designing your own car themes offer plenty of influence too.

Alongside the introduction of seasons and career progression changes, there are plenty of other new features and changes. There are now many properties spread across the map, for example. Each and every one of then can be purchased with your hard-earned credits, and many offer additional benefits others than being a place where you can buy, sell and tinker with your cars. For instance, you won’t experience any Skill Songs until you own The Huntsman’s Lodge. Skill points also have a different application in Forza Horizon 4. Instead of being used to buy generic perks, they now unlock masteries for each and every car that you own. Each car comes with its own mastery board, and it’s up to you to decide which cars you want to spend your points on. Thankfully, you’ll find that you accrue skill points much faster in Forza Horizon 4 than its predecessor. 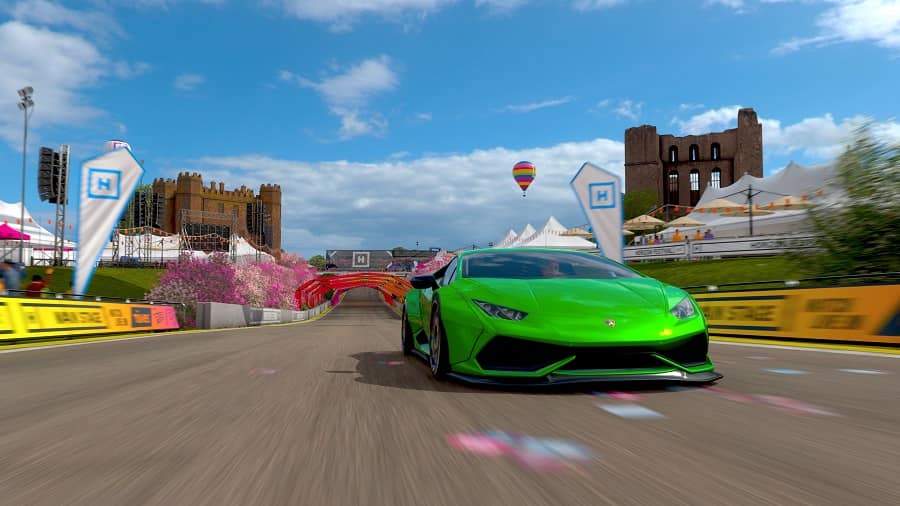 It’s the little things that really make the difference in Forza Horizon 4 though, like being able to change which car you’re driving pretty much anywhere. It really is a godsend. Many walls and obstacles in the open world that used to be impassable barriers no longer are. It means that, at speed, you’re able to plough through most objects, keeping your skill chains going for longer while also earning more points for destruction. Forza Horizon 4 just wants you to have fun. Also, thanks to the shared world, taking part in online events has never been easier or more involving.

Whether you’re creating a private session with your friends, or jumping into a team adventure with total strangers, it’s a stress-free task. And new to Forza Horizon 4 are Forzathon Live events which occur every hour. You don’t have to take part in them, but if you do, you’ll work with other players to complete objectives across three rounds, and it’s all seamless. The points you earn in Forzathon Live events, as well as those you earn by completing daily and weekly Forzathon Challenges, can be spent in a new Forzathon Shop; a place where you can buy Wheelspins and new Super Wheelspins, as well as a limited selection of cars and customisation items that change weekly.

The avatar customisation items are perhaps the weakest new addition to Forza Horizon 4; they’re just unnecessary. If you’re like me, you’ll quickly get fed up of winning emotes and clothing for your avatar via Wheelspins rather than money and cars. With Wheelspins being easier to accrue than ever, however, it’s not a problem that weighs too much on your mind. 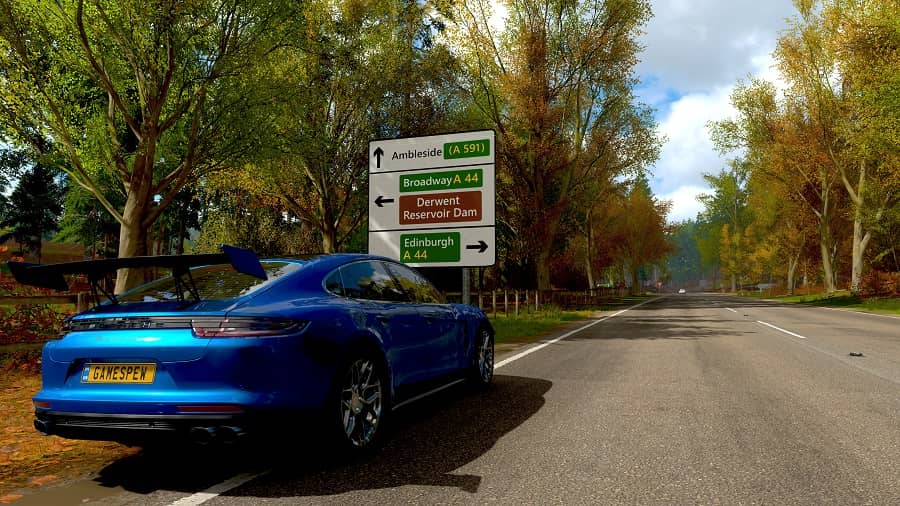 What’s most impressive about Forza Horizon 4 is both how it plays and looks. The cars handle better than ever, being weighty yet also responsive. You’ll fight with rear wheel drive cars in the snow and struggle to get them up hills; they behave just as you’d expect them to. There’s a wider selection of vehicles available too: if you’ve ever wanted to take a truck or a transit van for a joyride across the UK, now you can. And every minute you spend playing you’ll be in awe at how gorgeous it all looks. Textures are detailed and crisp and the lighting is sumptuous. Plus, if you’re playing on Xbox One X, you can choose to play in 4K resolution at 30fps or 1080P at 60fps with no deviations.

Forza Horizon 4 feels like a labour of love; a game for car lovers by car lovers. But also, it’s an engrossing experience that’s rewarding every step of the way. Exploring the map feels just as worthwhile as completing events. And its seamless multiplayer features, Forzathon challenges and seasonal events mean that you’re not likely to grow tired of it for years. It is, without a doubt, the best racing game available right now. In fact, it might be the best racing game of all time. If you own an Xbox One, you need Forza Horizon 4. It’s as simple as that.

Forza Horizon 4 is available on Xbox One and PC. We reviewed the Xbox One version.