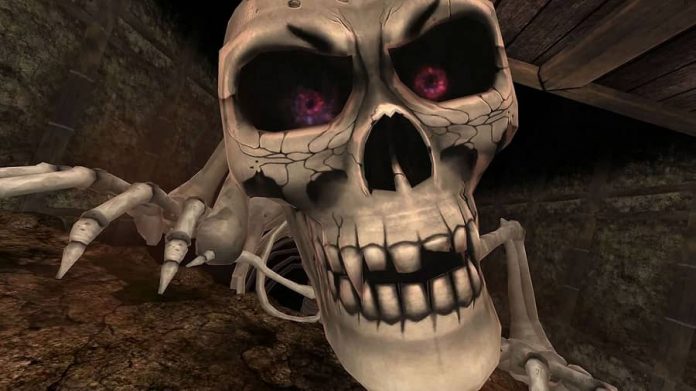 Deep within the walls of the yokai-infested Hyakki Castle, I expected to find horror.

I did, in a manner of speaking, find what I was looking for. Not in the classical sense, mind you. Or even in the existential. Though there were many ghosts and demons calling that multi-layered labyrinth their home, it wasn’t their odd forms that disturbed me. Instead, it was horror in the abstract sense; a reaction to how an otherwise thoughtful, well-meaning dungeon crawler is brought down by a single, initially promising but ultimately vacant mechanic.

For all its posturing as a game soaking the macabre and grotesque side of Japanese yokai lore, Haunted Dungeons: Hyakki Castle is nothing more than a solid albeit misguided dungeon crawler, its setting be damned.

A castle built on solid foundations

Inspired more by the likes of 2012’s Legend of Grimrock than more modern excursions into the genre, Haunted Dungeons: Hyakki Castle is a marriage of classic Japanese style and old school western design. Originally released on PC late last year, I’m surprised a game of this type found its way onto consoles, but it works. At its core, it is a 3D grid-based real-time dungeon crawler. Some may find that a bit antiquated and, occasionally, it is. Yet things fall into place more often than when they don’t, mostly thanks to well-designed dungeons that, rather than force you to think in the middle of all the action, funnel you into the right scenario from the outset.

Haunted Dungeons’ plot centres around four government-appointed yokai hunters on a journey to defeat the sinister Kigata Doman. In effect, it’s just window dressing, however Ghostbusters-like it may be. As with most dungeon crawlers, the emphasis here is on rewarding exploration, not deep and interesting storytelling. It uses exploring its setting as the main incentive of play. In tandem with its interestingly designed dungeons, Haunted Dungeons: Hyakki Castle displays a firm understanding of what makes dungeon crawlers so fun to begin with. 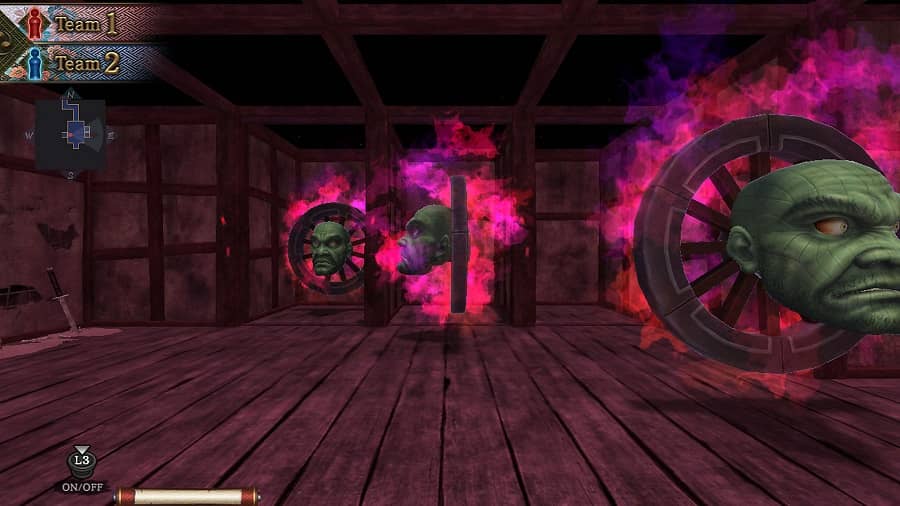 An achilles heel or a yokai’s weak spot, whichever you like

At Haunted Dungeons‘ centre is a party-splitting mechanic. But while its premise sounded exciting, it never lived up to its full potential. At any time, you can split your four-person party into two teams, though you’re only able to control one half at a time. To make up for this hindrance, the unused half of your party will turn to stone and thus take far less damage from enemies as you perform various actions with the other half. That’s not to say they’re invincible, however.

Although splitting up your party allows you to flip various switches and use different strategies you may have not been able to use otherwise, there’s always the chance that a powerful yokai will catch your party divided and unprepared. There’s a nice risk versus reward balance at the core of Haunted Dungeons; at its best, it feels tense and rewarding and, at its worst, amounts to an unwanted obstruction of progression. 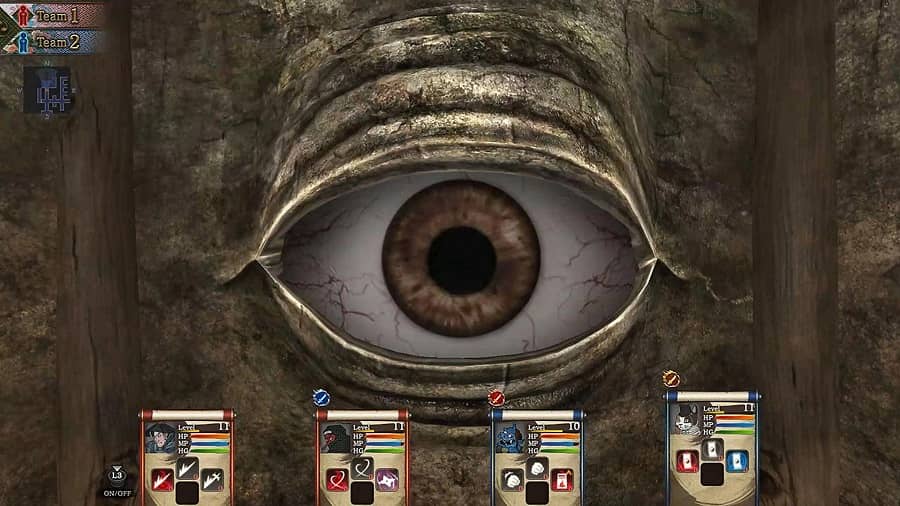 However, there is a lot of potential that could arise from this singular mechanic. Perhaps puzzles become more inventive as the game progresses, requiring you to split and reform your party multiple times before unlocking the next door. Or maybe certain enemy encounters require attacks from different perspectives at once. Alas, no such things ever came to be. The game relied mostly on early, generic puzzles and enemies more often than not. Perhaps even worse is that it’s easy to lose track of one half of the party if the other wanders off too far. It feels like a game that, half-way through its development, discovered the key piece to its identity but was never able to structure the rest of the game around it accordingly. Like the Fortress of Rohan in The Lord of the Rings, Haunted Dungeons: Hyakki Castle is not impenetrable.

Luckily, splitting up your party of four isn’t the only thing you’ll be doing. Haunted Dungeons asks far more from you during both combat and normal exploration. Whether your party is moving as a singular unit or split up into two, you can only attack with one character at a time. Assigning actions to the four face buttons, each action you take has a corresponding cool-down, so you can’t rely on one character to get you out of a jam. Instead, combat becomes a juggling act; you’ll use attacks, spells, and swap between characters, all the while splitting up your party and switching between them when necessary to out-manoeuvre enemies. At face value, there’s a lot to keep track of, and it forces you to fight carefully and strategically even against easier foes. 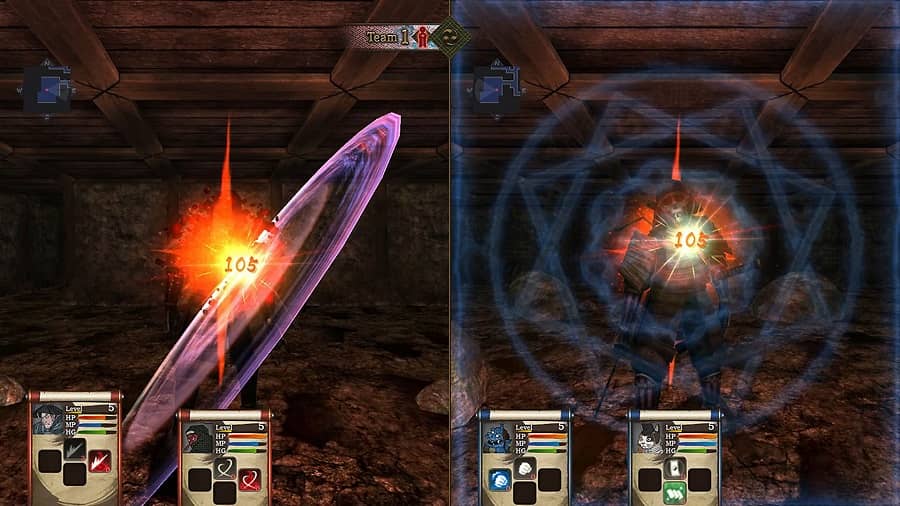 No matter what though, Haunted Dungeons shows a passion for its source material that always shines through. Even though we’ve had various games as of late that have tackled the more malicious myths of yokai lore like Nioh, there is a nearly encyclopaedic offering of spirits on display in Haunted Dungeons that seems incomparable to its peers. Better still, they seem to be teeming with authenticity and style in equal measure. I won’t soon forget the feeling of taking on a Gashadokuro as if I was pulled into the famous painting Souma no furudairi itself; the giant skeleton emerging from the shadows behind it like a behemoth.

Yet it goes beyond just its enemy designs, and stretches into nearly every aspect of the game. Most notable are Haunted Dungeons’ beautiful 2D cinematics which feel like old ukiyo-e woodblock prints in motion. From a studio named after Tokyo’s Asakusa district, I wouldn’t expect anything less. There’s a real sense of passion and respect for Japan’s various cultural legends, which is delivered in spades.

Like most games, how good of a time you have with Haunted Dungeons: Hyakki Castle will ultimately depend on what you bring to the experience yourself. If you’re hoping for the next great dungeon crawler, then you most likely will be disappointed. While its many mechanics and structure are a valiant attempt at the form, the game ultimately stumbles where it should succeed. However, if you’ve found its artwork online and are more interested in its exploration of yokai than anything else, you’ll probably enjoy your time quite a bit. For myself, as much as I enjoyed the various takes on the many cursed spirits of the game, I’m still left wanting more.