Ninjin: Clash of Carrots is a side scrolling beat ’em up unlike anything else you’ve ever played.

Placing you in control of a ninja rabbit – and a fox if you decide to play in co-op – it’s energetic and lively; very rarely do you stop running forward. It’s also colourful and humorous and fun, meaning you’re likely to fall in love with it even though it has some pretty obvious shortcomings. Or at least I have, anyway.

Beginning with all the carrots being stolen from the sleepy town in which you reside, it falls upon your shoulders to get them back. Though it won’t prove to be an easy task with a number of nefarious foes out to stop you. With your ninja rabbit pretty much constantly in pursuit of the stolen carrots, it’s up to you to move him around the screen to deal with the waves of enemies placed in your path, only occasionally stopping to deal with a boss.

Due to your character constantly running forward, your melee attacks are also focused in that direction, leaving your back exposed to attack. For the most part then, you need to get behind enemies not only to attack them, but also to prevent them from attacking you. As such, taking on an enemy one-on-one can feel like a thumb war, with both characters seeking a way past their opponent and then applying pressure once they’re behind them.

Your efforts to outwit and outmanoeuvre your enemies can be greatly assisted by your ability to dash. Moving at an almost supernatural speed, you can dash through pretty much anything, including enemies. The only caveat is that dashing uses up your stamina, and if you run out of stamina, you’ll find yourself momentarily at a disadvantage. You’ll be unable to quickly dash out of the way of danger, and trust me, danger is pretty much everywhere in Ninjin: Clash of Carrots. 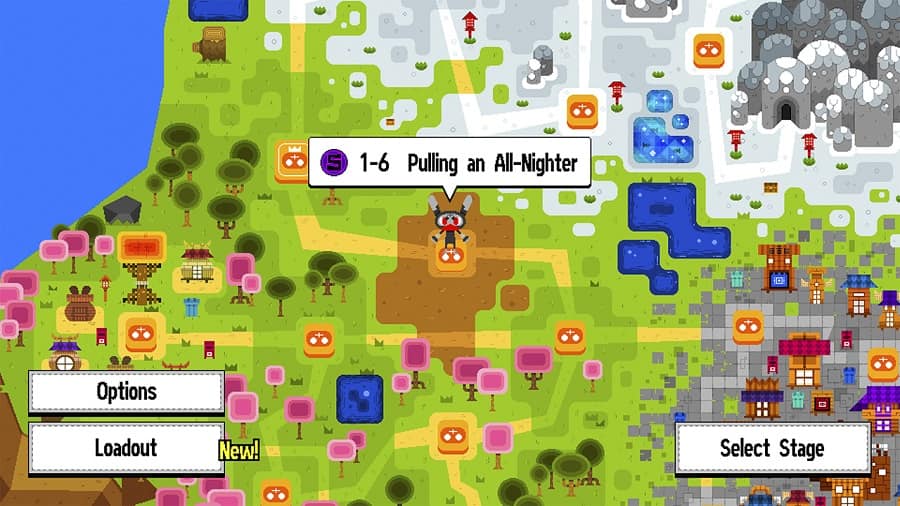 Being your bread and butter, melee attacks rarely expend stamina. Generally speaking, you’re able to slash a sword or thrust a spear to your heart’s content. Combine brandishing your melee weapon with a dash, however, and you’ll find that you have an attack that is particularly formidable, but also puts strain on your stamina if used too often. And for the times when melee isn’t an option – i.e. dealing with enemies that blow up when hit – you have ranged weapons. Ranging from ninja stars to rockets, they’re great for taking out enemies from afar, but also drain your stamina when used.

Limiting your use of dash attacks and ranged weapons, Ninjin: Clash of Carrots provides further incentive for you to use standard melee attacks wherever possible with a special meter. A trio of special gems can be acquired throughout your adventure, each one providing a unique ability when the special meter bar is filled. And while hitting multiple enemies with a dash attack is a great way to fill it, you’ll also need to connect with standard melee attacks to prevent it from depleting during quieter moments or when your stamina is low.

Unfortunately, you don’t get to choose when to use your equipped gem’s special ability; once the meter is full, it kicks in automatically. Still, shrewd players will try to time it so that their chosen power becomes activated when they need it the most, and the reward is always worth it. From turning into a dragon to unleashing a horde of freezing chickens, activating a special power always results in many dead enemies, along with a healthy combo chain. 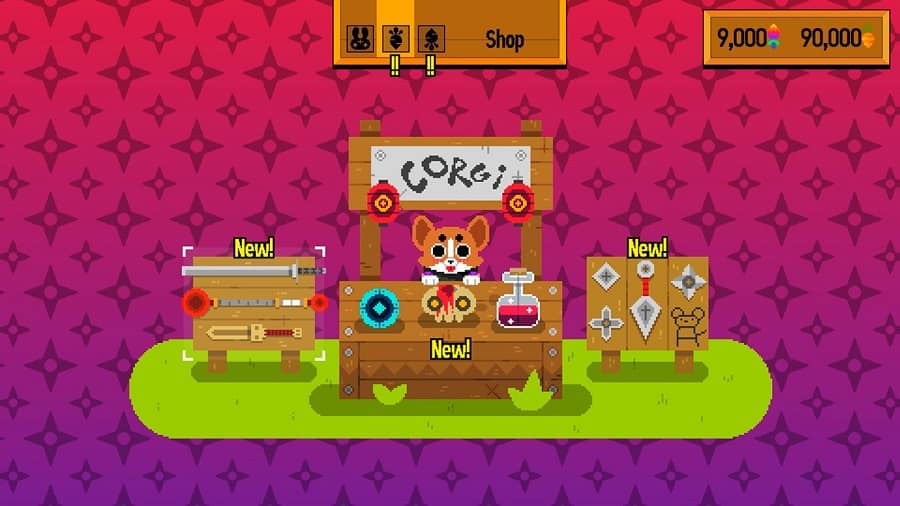 It’s all about your equipment

With a campaign that spans over 20 levels, the action would get repetitive rather quickly if it wasn’t for the constant barrage of new enemies and challenges that are thrown your way. You’re constantly provided with new combinations of enemies to deal with, constantly keeping you on your toes. Some can simply be faced head on; quickly dealt with with some frenzied slashes of whichever melee weapon you have equipped. Others, however, require a fair amount of strategy to deal with efficiently. Things get particularly troublesome, for example, when you find certain abilities being temporarily stripped from you.

Ninjin: Clash of Carrots also manages to keep you engaged due to the many weapons, artefacts and customisation items there are to collect. There are 100 melee weapons, each and every one of them unique not only in appearance, over 40 ranged ranged weapons, and plenty of artefacts and customisation items. Collecting them all is not only fun, but it also allows you to experiment with different play styles.

I found myself drawn to equipping large heavy weapons and making ample use of dash attacks, but that left me open to attack from faster moving enemies, even with an artefact equipped that boosted my stamina meter. You might find that using a lighter sword with high attack speed works best for you, especially when paired with an artefact that boosts your stats at higher combo levels. It’s all about trying things out and finding what works best for you in any given situation. 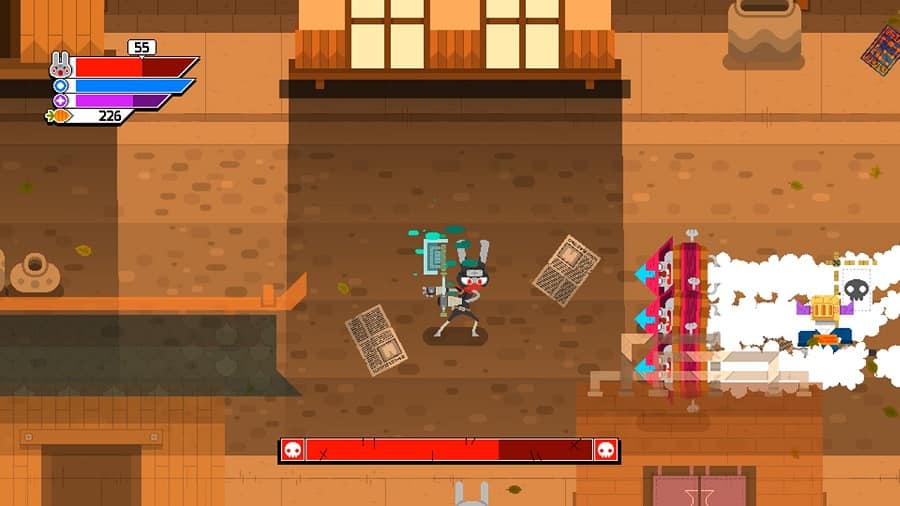 There are just a couple of issues that prevent Ninjin: Clash of Carrots from being a truly great game in my eyes. First is its difficulty level, which is absolutely all over the place. Some levels can prove to be truly fiendish, keeping you going back time and time again with new strategies until you finally succeed. Most, however, are a walk in the park. While most challenges can eventually be overcome by experimenting with new equipment and simply getting better, however, the final boss just really takes the cake. He’s infuriatingly difficult, to the point where I’ve simply given up all hope of ever defeating him.

The second of Ninjin: Clash of Carrots‘ issues that I have is found is its Oni TV mode, an endless challenge that provides the game with ample longevity once you’re done with its campaign. Starting out with your basic equipment every time you play, after every three waves of enemies you’re allowed to choose one of three items presented to you. Unless you have encyclopaedic knowledge of every weapon and artefact available in the game, however, you’ll often be at a loss for what to choose. In time you learn, but there’ll be plenty of frustration along the way.

There’s a solid ten or so hours hours of entertainment to be had with Ninjin: Clash of Carrots. Even more if you aim to get S-ranks on all stages and collect all items. Thanks to its great sense of humour and fast-paced gameplay, it constantly puts a smile on your face while you’re playing, even when failing. And to seal the deal it’s aesthetically pleasing too, especially if you go into the options and turn smoothing on. Its final boss is destined to prevent all but the most dedicated of players from truly finishing it, but the journey there is so enjoyable that most won’t care. Ninjin: Clash of Carrots is so unique that you can’t help but give it some slack.

Ninjin: Clash of Carrots is available on PS4, Xbox One, Switch and PC. We reviewed the Xbox One version. 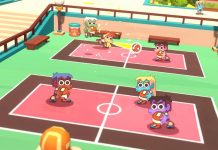 Dodgeball Academia Proves that RPGs and Dodgeball Go Together Rather Well 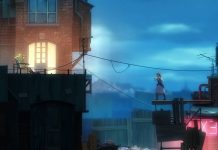 The Games Of 2018 You May Have Missed 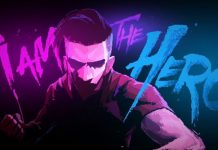 I Am The Hero Review 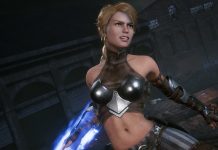