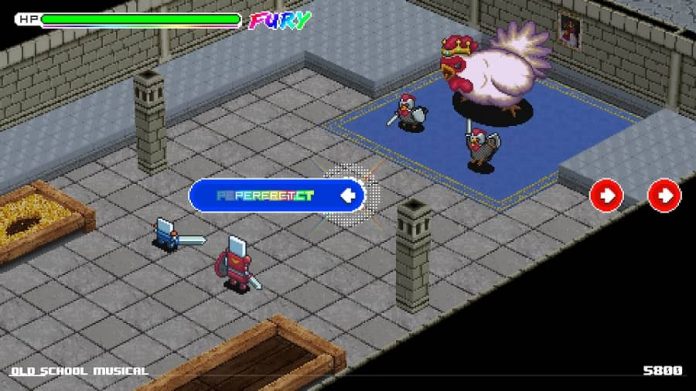 To describe Old School Musical – hell, even to see it in action – is to paint an incredibly surreal picture. Its sheer absurdity could be a tricky obstacle for some players to overcome, but once you’ve managed to embrace it, what you’re left with is a glorious gem of a game that truly deserves a special place in your library.

Old School Musical is a trip through video game history, of sorts. After a short introduction to the game’s two protagonists – Rob and Tib, two blocks with eye holes – the gameplay cranks up. Essentially, Old School Musical is an old-fashioned rhythm game. While catchy chiptunes play in the background, it’s up to you to match the button prompts on screen in time with the music. It’s Dance Dance Revolution for your fingers. But it’s so much more than that.

There’s a strong narrative running through the game that ties everything together. Something strange is happening – Rob and Tib’s world begins to glitch, and while looking for their mother at home, they find a note that urges them to find her. Here ensues a journey through numerous ‘worlds’, with glitches transporting the blocky duo from one universe to the next.

But Old School Musical’s worlds aren’t just any old worlds; each one is a homage to a videogame past or present. I chortled as the first proper level opened up, revealing my protagonists dressed as Mega Man. Between lines of humorous dialogue, I tapped buttons in time to the music while my characters side-scrolled through a level paying homage to the Blue Bomber. 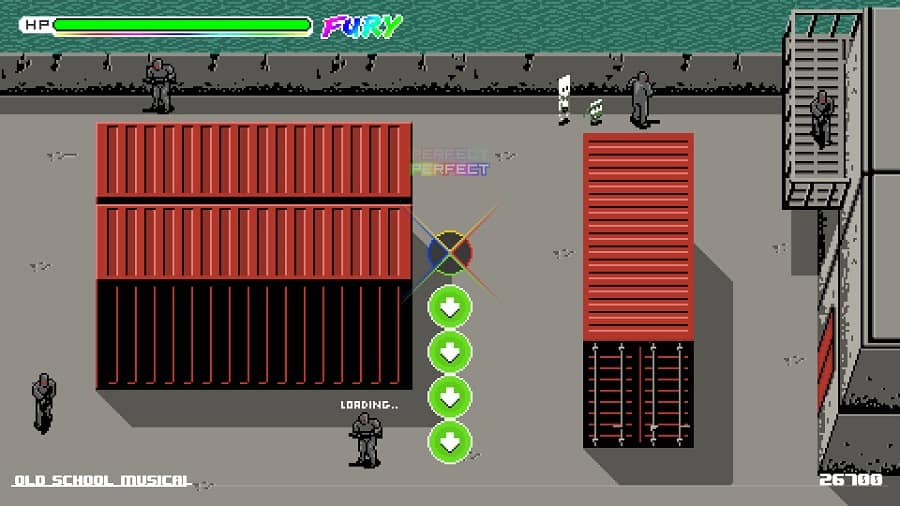 Mega Man is only one of more than half a dozen homages that will have your spine tingling with nostalgia. You’ll encounter Teenage Mutant Ninja Turtles, Outrun, Tetris – hell, even The Last of Us. My personal favourite, though, has to be the pair of Metal Gear Solid 5 levels.

Rob and Tib adopt the roles of Snake and Quiet. As you tap along to an espionage-themed chiptune, they’ll sneak around in the background, stealthily taking out enemies as you progress. But it’s the dialogue in between gameplay that really brings the game to life. Tib, in the role of Snake, suddenly becomes very aware of the fact that Rob, as Quiet, is wearing a bikini.

“Rob, I haven’t said anything about your outfit until now. But I’d like to talk about it,” he says.

“I didn’t choose the underwear, Tib.  The underwear chose me,” Rob responds.

And so ensues a hilarious conversation about how liberated Rob feels and how his skin can breathe, and how Tib’s skin must be practically suffocating under all that heavy camo.

But then Rob gets a little cold and asks for a bandanna.

It’s little exchanges like this that give Old School Musical a cheeky charm unlike no other. It takes a special game to take popular video game properties and not so much parody them as lovingly poke fun at them, in a way we can laugh along with regardless of whether we’re familiar with the original material or not. And that’s this game to a tee. Old School Musical is juggling so many different balls at once, but it somehow manages to keep them all flying elegantly through the air. It’s a music rhythm game, it’s a parody, it’s a platform game, it’s an utterly ridiculous pixelated comedy. Each element is done so well on its own, but blended together, it becomes something quite special. Bizarre, yes. Surprising, absolutely. But special all the same. 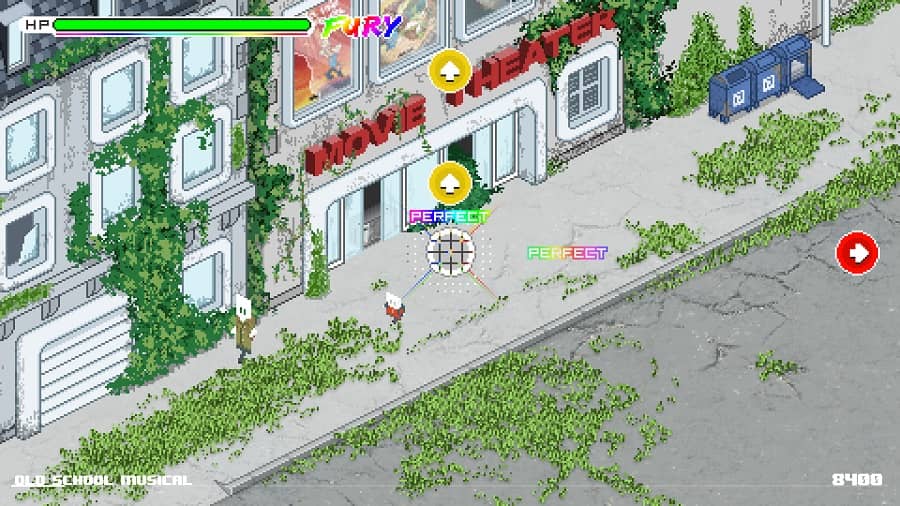 My only mild complaint would be the brief platforming section that’s introduced towards the end of the main story. For me, it somewhat slowed down the otherwise fantastic pace of game. Rhythm is momentarily tossed aside as you wander around a village, interacting with its residents. I was just eager for more musical action. But it’s a very minor niggle in what is otherwise an absolutely superb and original video game.

Outside of the main story, which takes a few hours to complete, you can play for high scores in arcade mode by playing any tracks you’ve unlocked – there are 50 altogether. You can also revisit any story level you like at any point, should you want to try and beat your original score or try again on a harder difficulty.

I played the entire game on medium difficulty, but you can also choose easy or hard. Medium was a little too easy for the first half of the game, but settled into a nice challenge without being too dexterously taxing towards the end of the game. Easy often feels too slow, but it’s a more accessible option – or a great way to play if you want to be able to concentrate more on the action happening in the background. And it really is worth paying attention to.

In the end, there really isn’t anything else quite like Old School Musical. It’s a game that’s been several years in the works – and when the outcome is something as unique and special as this, I daresay every moment was worth it. Whether you’re a fan of old school rhythm games or just want a hilarious trip through video game history, Old School Musical is absolutely worth picking up.

Old School Musical is available on PC and Nintendo Switch. We reviewed the Switch version.