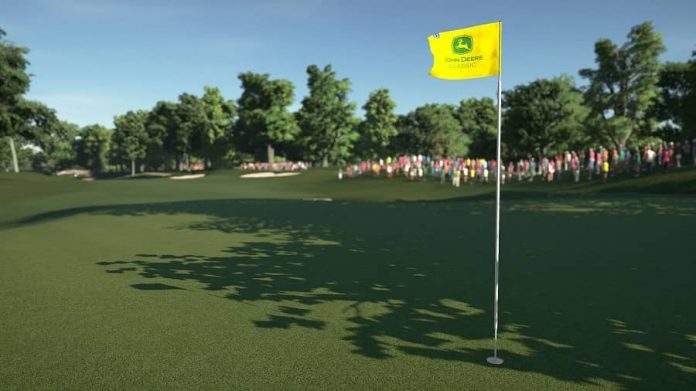 My hand on the 5 Iron, I pulled back on the right thumbstick, watching as my player entered into his backswing.

Just as he reached its apex, I flung the thumbstick forward. The golf ball goes flying into the air, soaring over sand pits and debris hazards until landing onto the green nearly three hundred yards away. The ball is close enough to the hole that, if I’m lucky, I’ll be able to score under par. My next swing isn’t as lucky, however, as I tap the ball with my sand wedge and hit it just narrowly past the hole. Down the incline of the course, it continues to roll until getting stuck onto the rough.

This is how my luck will usually go in The Golf Club 2019, and so too does it reflect the game itself. A game that does a lot well but, in the end, just narrowly misses perfection.

The grass is always greener on the green

In the beginning of your career in The Golf Club 2019, you’re allowed to create your own golfer in a surprisingly in-depth character creator. Surprising not just because you’ll rarely be seeing your golfer’s face during gameplay, but surprising because despite the game’s newly-acquired license, there is little spectacle given to its presentation. While the six real-world courses and numerous fictional ones within the game never truly disappointed, the lifeless character models in the crowd and the various landscapes in the distance never elicit much attention. The Golf Club 2019 surely isn’t going to compare to the likes of the yearly Maddens and Fifas of the world.

Yet, even still, the level of detail on display is enough to impress. Playing on the TPC Scottsdale course in the beginning of the game’s career mode is still a sight to behold with the Arizona sun beating down on the lush green and arid sand pits alike. The cacti debris and dusty mountains in the distance give it a true sense of place, so much that even someone like me can tell where we’re supposed to be. Beyond just momentary flashes of knowledge, this attention to detail doesn’t just feel faithful to the places, but to the sport its representing itself. Yet, when The Golf Club 2019 is willing, it can also dazzle you with some of its more extravagant fictional courses, like The House On The Cliff. 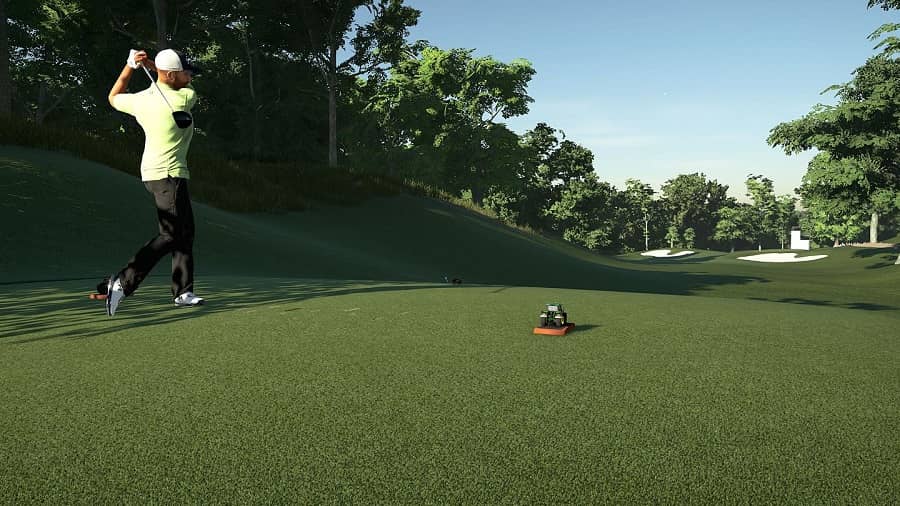 It’s all in the backswing, or so they tell me

Although as always, official licensing or not, what makes or breaks the game is in its fundamentals, and The Golf Club 2019 treats things like a pro. Allowing you to choose between the right or left thumbstick, you’ll pull back on the stick to initiate the backswing and push forward to begin the downswing. The straighter you’re able to keep your downswing, the better chance you’ll have that the ball will go where it’s supposed to go, but there’s more to it.

Perhaps most importantly, there’s your timing. Wait too long as you hold the backswing or push too fast into the downswing and you’ll lose out on power and accuracy.

Able to pinpoint and translate what makes playing golf so fascinating in the real world, The Golf Club 2019 is captures the feeling of nailing a perfect swing perfectly. There is, of course, much more to it than simply the flick of a stick as the more detail-oriented players will also be able to change plenty. Adjusting your positioning can help you create the right kind of loft, draw, and fade shots necessary for the situations, and the game gives you the tools necessary to see how each movement can affect your swing. These tools are also readily available and easy to use, since many of them are just a single button press away – something an amateur like myself found quite useful in the many tricky predicaments I got myself into while playing. 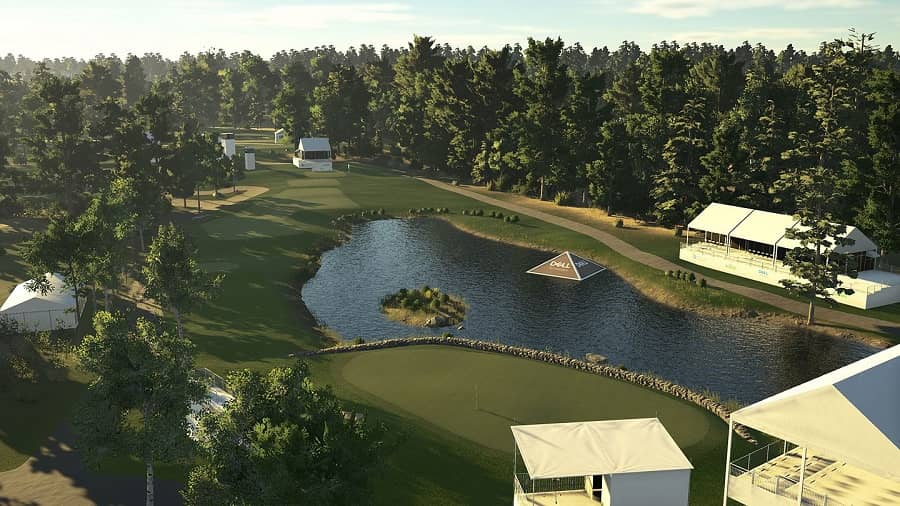 18 holes and then some

The Golf Club 2019 is more than just a nice packaging for some nifty swing mechanics, of course. From the word go, you’re able to play in any of its premade courses if you’re just looking to play a round of golf – either by yourself, via matchmaking with others online, or in your own private online match with friends. If the premade courses aren’t your cup of tea, or if you’re just looking for something else to do, you can create your own courses in the game’s designer mode. Along with sharing your courses online, you can also download other players’ courses, and even import courses from The Golf Club 2, which gives plenty of bang for your buck.

The most important feature, however, is obviously its brand new PGA Tour mode. A career mode that spans 32 events, there’s a lot of golfing to do. Breaking your way through the initial web.com tournament, advancing through to different tours can be a long and difficult challenge. Perhaps most interestingly is how The Golf Club 2019 uses its autosave function, which makes it next to impossible to save-scum your way through a career. It puts a lot of tension on every individual swing since even one bad move could spell trouble for any pro golfer. Once you’ve made your way through a notable chunk of the game, you’ll undoubtedly feel better than you did in the beginning, which isn’t something you can say about every sport sim out there. 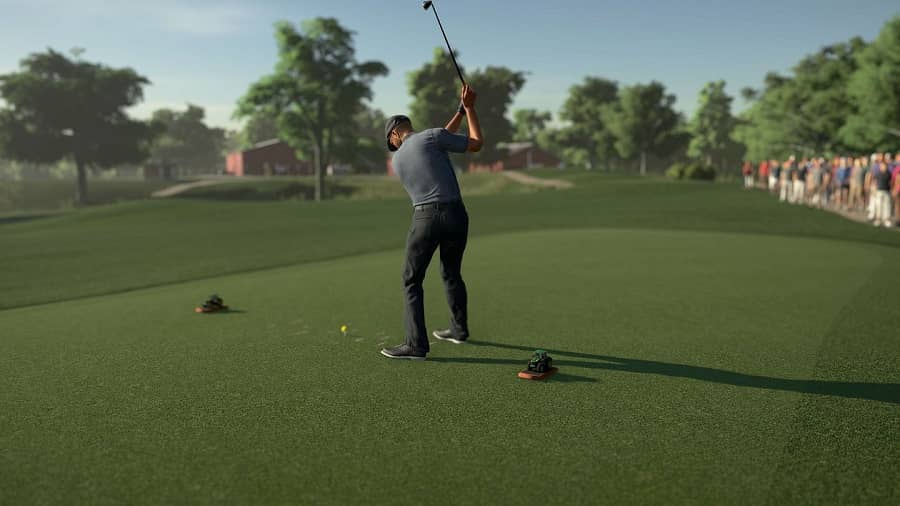 Not an ace, but still under par

The Golf Club 2019 is a game made for a particular type of fan. For the average golfing fan, there may not be enough here to keep them engaged since, despite the heavy attention to detail, there remains only six real-world courses to play through. However, for the more hardcore followers of the sport, or even the type of gamer that might enjoy the meditative experience of playing through 18 holes of golf on a lazy afternoon, there definitely is plenty to dig in to here.

A game full of the sorts of tools you might wish you had access to in the real world, it’s a golf game that helps when it needs to but also stays mostly out of your way. You won’t find many lengthy lines on the golf course, telling you where your ball will go or how steep an incline may be. It is, in essence, a game about golf that is as true to the sport as can be. Sure, it may be a sport for the rich and aristocratic among us, but in the virtual world of The Golf Club 2019, we can all experience a little bit of the competitive high life. It may not land an ace, but it’s still plenty under par.

The Golf Club 2019 is available on PC, PS4 and Xbox One. We reviewed the Xbox One version.