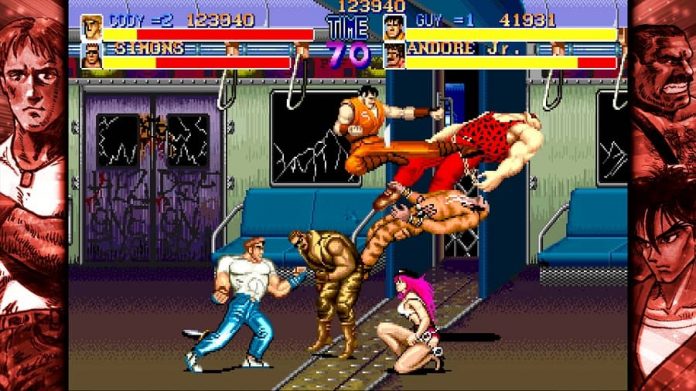 Another week, another pile of games to get through.

Winter’s drawing in, and while stormy weather may be keeping us indoors, we at least have a pile of video games to keep us company. What’s better than snuggling down under a blanket, controller in hand, and a great game to get absorbed in? Not much, that’s what we say.

Here’s what the GameSpew team has been playing this week. Have a great weekend, everyone!

Rich: I really like Final Fantasy XV, but this week I got stuck into Final Fantasy XV Pocket Edition HD and I actually think I might like it more. Also, it’s a great way to enjoy the game’s story in a less time-consuming manner. I highly recommend that you pick it up on Switch if you haven’t played it, or Final Fantasy XV yet. Also this week, I’ve been playing the hell out of Capcom Beat ‘Em Up Bundle. Honestly, if you have any love for the side-scrolling beat ’em up genre, it’s a must-have. Armored Warriors and Battle Circuit in particular are brilliant.

Nippon Ichi Software’s Labyrinth of Refrain: Coven of Dusk has stolen some of my time too. It’s part The Witch and the Hundred Knight, part Disgaea, and fully a first-person dungeon crawler of epic proportions. I’m quite looking forward to playing more of it. Right now, however, another game is taking up all of my time…

Kim: This week, I’ve mostly been playing Broken Sword 5 on Switch – the latest format for it to release on. It’s been a while since I last played it – almost five years ago when it released on PS Vita, in fact. These days I find I don’t have as much patience for point and click games, but I can also find time for George Stobbart. It’s an ageless classic. It might not be quite as good as Shadow of the Templars, but it’s still a fantastic entry to the series. Fingers crossed for a Broken Sword 6 reveal soon…

I’ve also played Old School Musical on Switch, which is a bonkers, but fantastic, music rhythm game. I didn’t know what to expect, but I was pleasantly surprised. It’s well worth a look, that’s for sure. I’ve also put a little time into RGX Showdown, which is a Telltale-published online racing game that’s had ex-Criterion and Black Rock developers working on it. Short races that mostly involve dodging traffic, you’ll compete head-to-head with other online players to climb the leaderboard. It’s simple, but a lot of fun. Look out for a review next week.

And after a couple days at EGX in Birmingham, I’ve previewed a lot of new games. Look for lots of juicy previews in the next few days.

Stan: This week I have been finding all of the collectables in Marvel’s Spider-Man. Following the top 10 tips to get the most out of Spider-Man, I’ve been discovering all the game has to offer outside of just the main story. The collectables are meaningful and worthwhile, even giving me the chance to find new costumes for Spider-Man. I may have finished the main story, but I’m far from finished with Spider-Man just yet.

Chris: Aside from clowning around in Spider-Man, I’ve been clotheslining wrestlers in Fire Pro Wresting World. I found it a little hard to get invested in the game initially, until I finally twigged how to download other wrestlers, ones that I was more familiar with. Now I’ve had Kane smacking seven bells out of Hulk Hogan, without feeling that I’m merely just button mashing. I’m faintly miffed that none of the user creations include World of Sport stalwarts Giant Haystacks or Big Daddy, and I may well decide to remedy that. Look out for my review early next week.

Becca: This week I was out of town on vacation but I brought my Nintendo Switch along with me and played a bunch of Mario Kart 8 with my friends. It’s always a good time playing through the game with people who have never played: because of all the vehicle customisations, they get super overwhelmed. When my friend decided to go with Cat Peach in her cat car, I knew things had gone off the deep end. Another friend and I have just started a new playthrough of Detroit: Become Human. I’ve completely beat the game, but she’s never played so shes technically the one playing but I’ve been watching (other than those few minutes I fell asleep…) and I really love seeing how different her reactions are to mine.