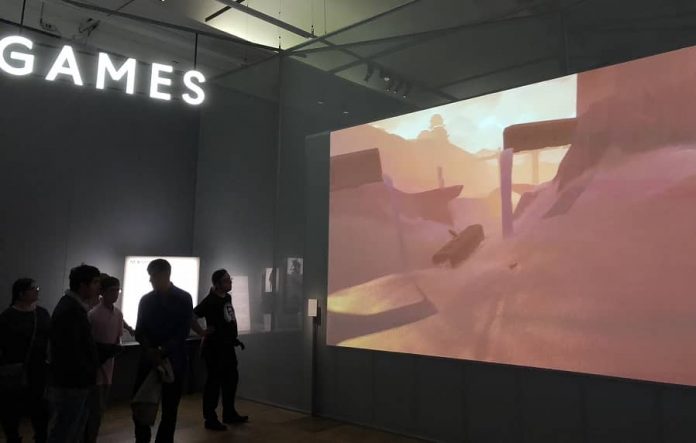 Museums don’t get much more historic than the Victoria and Albert Museum (V&A) in London.

It was founded in 1852 and is devoted to design and decorative art, with a huge global collection that more or less tells the history of humanity making pretty things and pretty useful things. Perhaps, most notably, it’s got the largest collection of renaissance sculpture outside Italy and this is one of the first things that hits you when you enter its hallowed halls.

It therefore feels like an odd site for a big videogames exhibition, especially one that addresses games as a contemporary rather than a historic medium. It’s tempting to think of this as yet another sign of the mainstream acceptance of games, and while there is some truth to this, despite its history and size, the V&A is perhaps surprisingly contemporary. Currently, Design, Disrupt, Play is running alongside temporary exhibitions focusing on the future and Frida Kahlo, while previous exhibitions have covered the sixties, renowned fashion designer Alexander McQueen, and Pink Floyd. In some ways, videogames are a perfect fit for the V&A, sitting at the intersection of design and art, but it still felt odd to stroll past sculptures made centuries ago to look at screens in a building that’s at least 100 years old.

Once you get in, you’re quickly immersed in the initial Design phase of the exhibition. Various pieces and videos give you a behind-the-scenes look at how some of the most notable videogames of the past few years have been produced. A massive screen is taken up by renderings of No Man’s Sky’s countless planets as visualised by the virtual “drone” the studio created to visit them all, with another screen showing how the algorithm that essentially created the vast majority of the game actually worked. The Journey section, meanwhile, included footage shot in the Californian sand dunes that informed how cloth moved and how the sand reacted in the finished game. For Bloodborne, Youtuber Matt Lees narrated his experience of fighting one of the game’s iconic bosses (with a smaller screen showing the movement of his hands on the control pad). He spoke about how the game used elements such as music and certain visual effects to cloud clarity and increase tension during what was, Lees argued, a fairly simple mechanical exercise. 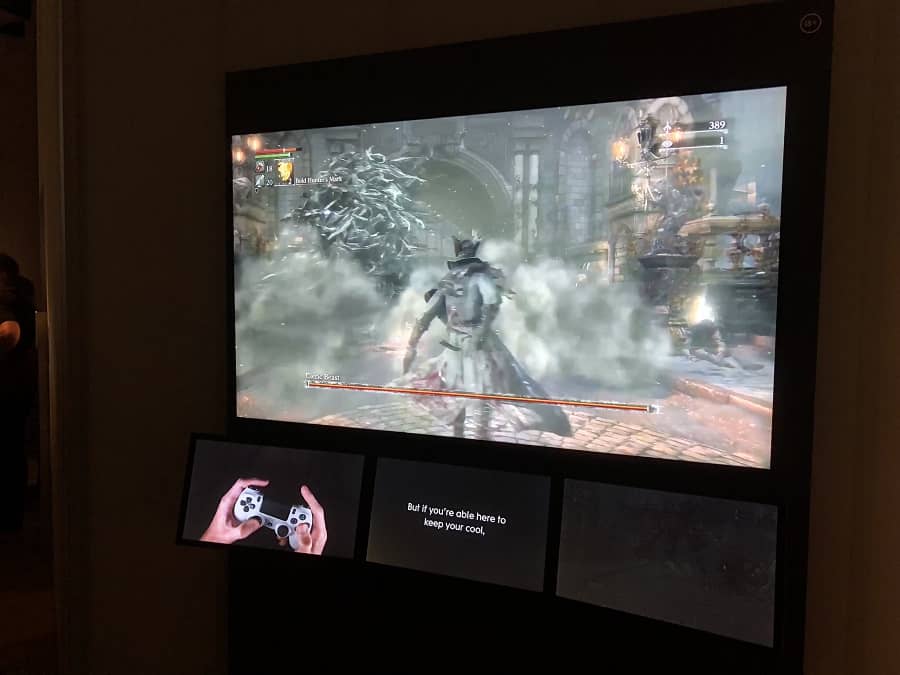 Like many of the games here, there was a focus on the original materials produced during development, with notebooks from various developers showing character sketches and copious scribblings in plot and game design. A similar approach was adopted for The Last of Us; sketchbooks and concept art accompanied a video that showed a finished sequence from the game alongside its various stages, from an initial world of blocks to AI maps and the technical audio code.

There was also a look at how Nintendo reinvented the first person shooter for all audiences with Splatoon and how its distinctive aesthetic then found its way into the real world through licensed t-shirts and water pistols. An exploration of Kentucky Route Zero focused on its literary influence and use of magical realism, while some variety was added with exhibits related to an ultra-realistic (in content, if not in looks) Unity game where you play a grandmother whose goal is simply to sit on a bench in a graveyard and who moves at a painfully slow pace.

This first phase of the exhibition feels like a decent opening shot, with two things becoming clear immediately. One is videogames are being taken seriously, and the second is there’s a clear interest in showcasing the diversity of the contemporary gaming scene. Now, obviously sketchbooks and concept art aren’t going to float everyone’s boat but those with an interest in the intricacies of game development should find plenty to appreciate here. 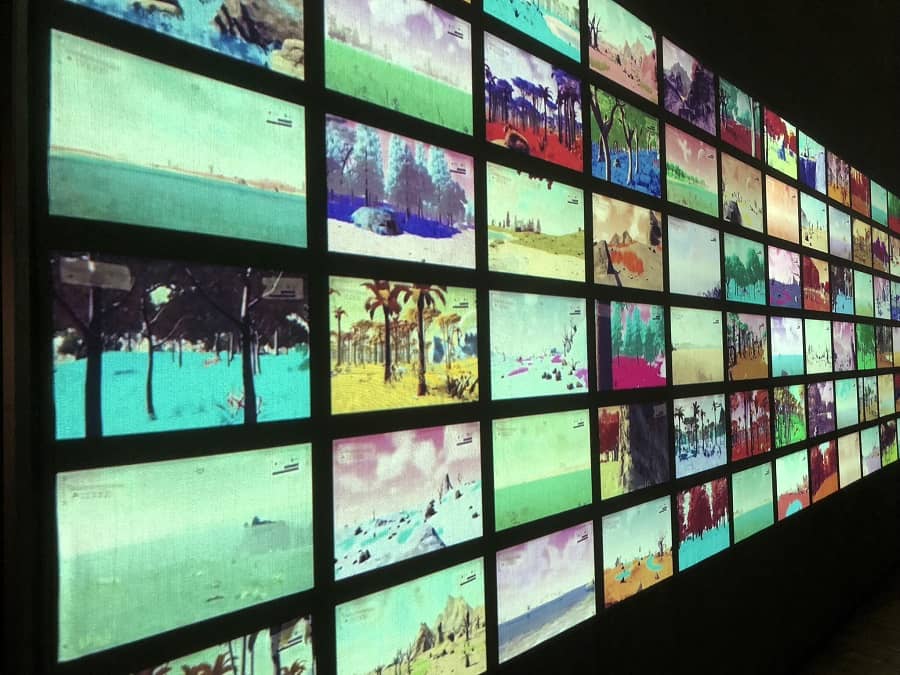 Things get more challenging, more provocative and more interesting as you pass through a curtain and enter the Disrupt phase of the exhibition. Here, the exhibition engages with issues that challenge gaming’s quest for mainstream acceptance. It tackles the fact that the overwhelming majority of games are still telling stories of straight white men solving problems through violence and where women are generally portrayed as damsels in distress and/or sex objects. Importantly, the argument is not that we should eliminate these games; rather, it’s that the diversity of videogame protagonists should reflect the diversity of their audience and that games should address topics that reflect the full range of the human experience.

Much of this is conveyed through another big screen that features a revolving cast of talking heads (including journalists, game developers, and academics) discussing things like why violence is so central to games and why so many games feature white characters. Some of the answers are not what you’d expect; renowned games writer Simon Parkin notes how violence and games have been intertwined since chess was created as an abstract representation of military battles, and that the gun is perfect for game designers as it offers an unrivalled opportunity to affect objects both near and far in a game world. 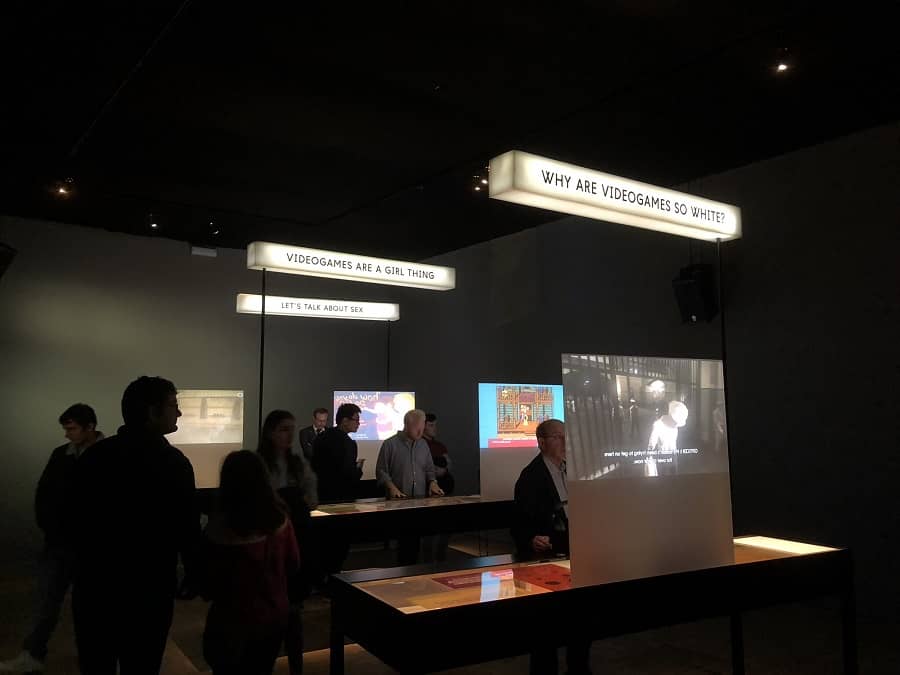 Another speaker addresses race, noting that part of the problem is that videogames lifted their approach to lighting from movies, which for decades devoted all their efforts to figuring the best way to light white skin against a dark background. This rolling footage is supplemented by exhibits around the room under glowing, almost floating headings like ‘Why are videogames so white?’ and ‘Videogames are a girl thing’, which combine smaller screens with quotes lifted from online articles and printed onto glass.

From these smaller exhibits, two things stayed with me. The first was a quote from a Pakistani Kotaku reader who was thrilled to see the Pakistani city of Karachi used as a multiplayer map in Call of Duty Modern Warfare 2. That excitement quickly turned to disappointment when the map “had Arabic written all over” despite the fact that no one in Pakistan speaks Arabic. Of course, no one is playing Call of Duty for its cultural sensitivity, but it’s rather depressing that a multi-million dollar franchise can’t be bothered to do the most basic research when it comes to other cultures. If you’re going to demonise an entire country as terrorists, you can at least go on Wikipedia and check what language they speak. (For the record, the official languages of Pakistan are English and Urdu.)

The second thing to stand out to me was while watching footage of Mafia 3. I reviewed the game for another site last year, but it was still both shocking and inspiring to remember just how directly the game addressed race. It wasn’t just that it featured a black protagonist, but that his blackness was vital to the story and informed the behaviour of other characters. The most blatant example of this was him being called the ‘n-word’ on the street, or being harassed by police officers, but the video also pointed out how the attitude of the police would change depending on if you were shooting a gun in a rich, white neighbourhood or a poor, black one. It requires studios to be brave, but Mafia 3 provides compelling evidence for the argument that games that seriously address social issues don’t have to exist at the margins of the contemporary gaming scene but can also infiltrate its mainstream. 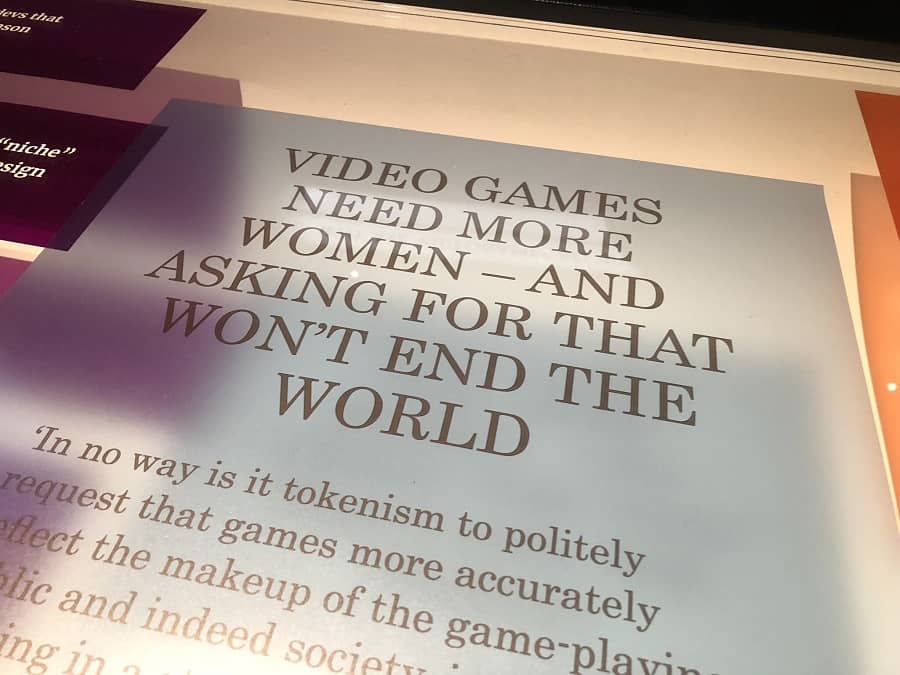 Leaving the main area of Disrupt, you pass through another curtain that leads you into an impromptu cinema  – a massive slightly curved screen and a bench. In here is a film that illustrates the ways that people interact with videogames that go beyond playing them in the conventional sense. Much of this is user-generated content, with short videos illustrating the countless pieces of fan art and cosplay tutorials that have been inspired by the Overwatch character D.Va, the staggering number of Minecraft YouTube videos that show off awe-inspiring feats of virtual construction such as Game of Thrones’ Westeros and a playable Pac-Man arcade machine, and the massive scale and real-world financial cost of a huge EVE Online battle that involved hundreds of players and thousands of ships. Most strikingly, there are clips from the 2017 League of Legends World Championship Final.

In just a couple of minutes, it’s clear why eSports are pushing for Olympic status; it feels in almost every respect like a massive sporting event. The venue, the Birds Nest Stadium in Beijing that hosted athletics events in the 2008 Beijing Olympics, is sold out, with over 40,000 fans watching the action play out on enormous screens. Meanwhile, the online viewing audience is over 60 million, there’s live commentary in almost every language you can think of, and the elation of the victors contrasts sharply with the dejection of the beaten finalists. At one level, this feels ridiculous – but then, if you really think about it, all sport is kind of ridiculous. To its devotees, eSports clearly offers many of the same pleasures as real-life athletic contests.

After Disrupt, which inevitably provokes some serious pondering on where games are going, Play feels like a chill out zone. This final area is basically an indie arcade, full of weird and wacky games to try out. Perhaps the most striking example is Line Wobbler, an abstract dungeon crawler that uses a column of flashing lights to simulate the player and their enemies, and has you attack by waggling a joystick back and forth. It’s bizarre, clever, and a lot of fun.

Elsewhere, there are chunky arcade cabinets housing what feel like playful experiments in gaming. One of these, QWOP, is a running game that assigns separate keys to each leg’s thighs and calves and therefore makes what is usually a simple motion an extremely difficult balancing act. Knowledge of anatomy might help, but most players generally produce an uncoordinated mess, and managing to run five meters is a serious achievement. Another is Queers In Love at the End of the World, a text adventure set ten seconds before the world ends, which cleverly balances knowledge and possibility. Reading all the questions and answers will allow you to make informed choices, but quickly answering will provide more options, so you have to balance your competing desires. 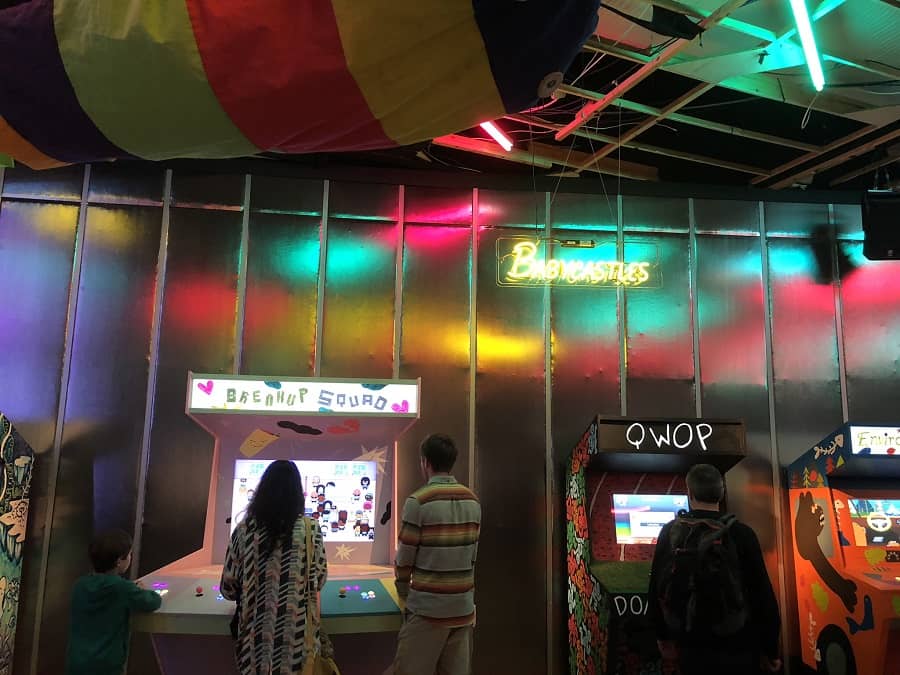 There’s also an arcade game that can be carried around in a specially constructed backpack and even a shooter that you play sitting inside an real car (although this didn’t seem to actually be playable when I visited). Play feels like a nice counterpoint to Disrupt. One is based on thought, the other action; one is a minimalist space of dark and light and the other is a riot of colour.

Design/Play/Disrupt is typical of an exhibition that, more than anything else, feels beautifully balanced. It showcases both the indie and the mainstream, the serious and the playful, and manages to both celebrate and critique the whole idea of videogames. If, as it felt at the outset, this is an important step in the mainstream acceptance of games, that’s not something that’s really reflected once you get inside the open-ended exploration of what games are and what they could be. It’s an exhibition that manages to find room for both criticism of Call of Duty’s misuse of Arabic and making coloured lights dance by frantically waggling a stick back and forth. Ultimately, all of it comes across as a fitting tribute to what really does feel like the most exciting artistic medium on the planet.

Design/Play/Disrupt is on in the Victoria & Albert Museum until 24th February 2019. Tickets cost £18; more information is available on the V&A’s website.