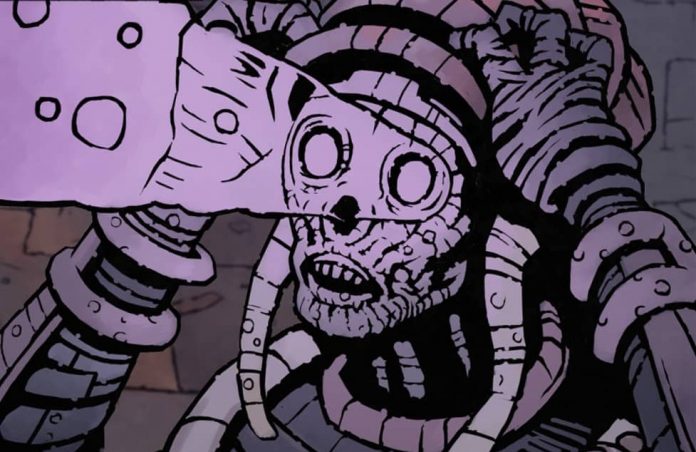 It would be easy, but incorrect, to dismiss Deep Sky Derelicts from Snowhound Games as a Darkest Dungeon clone.

When I first saw the comic-style artwork, the turn-based combat, and heard rumours of the nail-biting difficulty, I was ready to review this game unfavourably, slamming it for simply regurgitating another game’s trademark formula. However, I must confess, within 20minutes of Deep Sky Derelicts I was hooked like a heroin addict. It learns from Darkest Dungeon, XCOM and even CCGs such as Hearthstone and Fable Fortune, but somehow builds them all into a reliable and unique framework that is a joy to play.

Deep Sky Derelicts is set in a Star Wars-esque ‘old future’ with super-advanced technology such as space travel, forcefields, laser-weaponry, and much more. All of this technology has a kind of weathered look, as though it is something arcane dug out of an earlier epoch. There is also a host of intriguing alien lifeforms to be encountered, all of them characterful yet threatening. Some of these aliens are downright weird; others are Lovecraftian. It’s here the game shows its XCOM roots, because all of the aliens contribute to the creation of what is a surprisingly compelling sci-fi world that incorporates so many elements we already know and love, but just has enough of a different spin to keep you guessing.

The 2D comic book art style is a perfect choice for this kind of sci-fi aesthetic, with the hard lines and muted colour palette conveying a sense of grime and age. The art style is remarkably similar to that of Darkest Dungeon to the point that I wonder whether Chris Bourassa did work freelance on Deep Sky Derelicts. Every creature, character model, location and item is lovingly hand-drawn, along with a host of combat ‘animations’ – though they are in fact more like static, beautiful panels. This gives combat the feel of whirling through an exciting comic-book action sequence, panel after panel hitting you with eye-dazzling intensity. The panels are far more varied than you’d expect, and there are even unique panels for each creature’s deathblow, which makes the kills all the more satisfying. 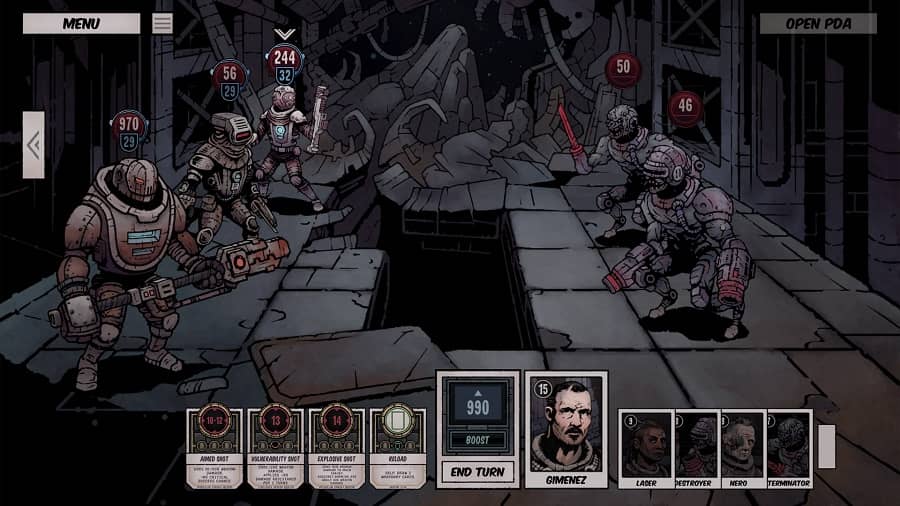 Your mission is to locate the ‘mothership’, a near mythological relic of ancient times and the solution to the Triumvirate Government’s quandary. To do this, you must explore the abandoned derelict ships floating around your home-base, acquiring data from their main computers, and eventually triangulating the mothership’s location. The more ships you discover, the more dangerous they get. As you venture out into the unknown, your crew will face increasingly harder challenges. Your home base features a pharmacy and surgery for patching up your crew, a bar where you can meet surreptitious individuals looking to give you contracts (side-quests), a research lab where you can improve your existing tools, a pawn shop where you can trade goods and sell junk, and the main government officials building, where you can talk to the sub-governor about your ongoing search for the mothership.

In this way, Deep Sky Derelicts once again echoes its forebearer Darkest Dungeon. From this main hub, you can ‘venture out’, taking your ship out into the depths of space to visit any discovered derelicts. The derelicts are procedurally generated according to their difficulty level, though each one also has unique elements which will always remain the same (such as quest-givers, encounters, and certain types of enemy).

Exploring the derelicts is a hell of a ride. Your crew has an Energy level (it starts at 1000 points, but this can be upgraded at the Research Lab). Just about everything costs Energy. Scanning the environment. Moving through the ship’s corrugated hallways. Fighting enemies. This creates a nerve-shredding tension in which you must balance completing your mission with the adequate resources. You can top up your Energy levels with fuel cells, but these are finite, so be careful. It’s tough, because although you might perfectly judge the amount of Energy required to get back to the ship’s dock and get back to home base, a random encounter might risk lowering your Energy levels dangerously.

Add to this the complexity of the encounters themselves, and you have something special. ‘Deep’ is an apt name for this game. The fighting in Deep Sky Derelicts is not like any turn-based combat system I’ve encountered before. It’s a combination of a card game and an RPG, and it works like a twinkling metal charm, though its complexity will daunt new players. Firstly, your crew and many enemies you encounter in the game have ‘shields’, energy-fields, which are a layer of armour that must be depleted before you can do damage. Certain attacks can deplete the shield faster than others. Certain enemies and classes can re-charge their shields. Attacks are determined by the cards in your ‘hand’. At the start of a turn, each character has a pool of cards in their hand (they will draw one when their hand drops below three). 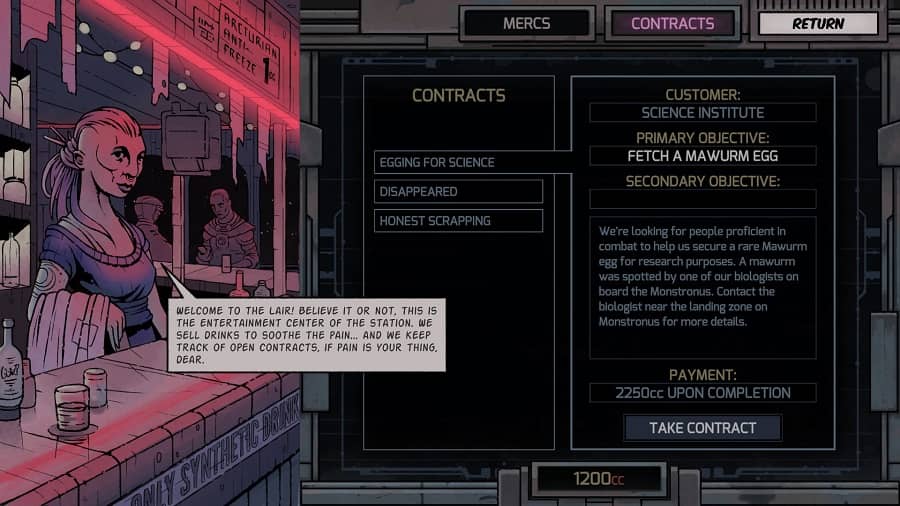 Some of these cards relate to unique class-specific abilities. For example, the Leader class has an ability called ‘Inspire’ which can buff allies and allow them to draw more cards. The Tracker has an ability ‘Mark Target’ which allows them to single out an enemy and de-buff them, making them vulnerable to damage. Then, each weapon and item equipped (as well as corresponding upgrades: each item can have two), also generates additional cards for that character’s deck.

Finding the right combination of items, upgrades and weapons, and corralling them with the class’ innate abilities and the other members of your crew, is a difficult but immensely rewarding task. All crew cards can be viewed in your PDA menu-screen and I found myself getting joyfully lost in tweaking my crew’s decks to make them into perfect killing machines. When I came home from my first derelict raid, having successfully acquired the mission data, I experienced a genuine adrenaline-rush thrill. That’s when I knew I was going to keep playing this game long after I reviewed it.

Unlike Darkest Dungeon, Deep Sky Derelicts is not so much focused on the psychological ramifications of adventuring. There is no system of psychological trauma or stress management. Instead, it is about survival and ingenuity in the harsh biome of space. I would say that this shift of focus means I care slightly less about my crew in Deep Sky Derelicts, (whereas Darkest Dungeon forces you to renounce your feelings to win) – the characters feel slightly less personalised even with the subtle ‘traits’ they have. 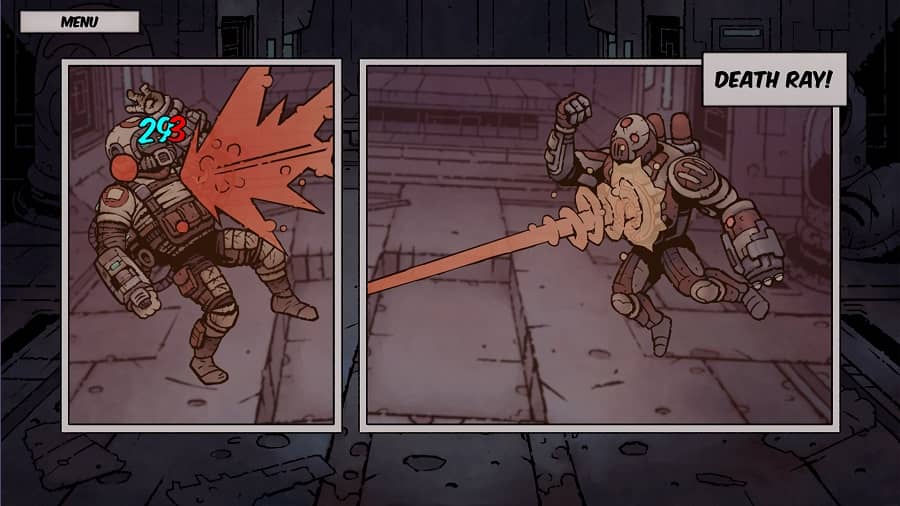 Darkest Dungeon punishes the slightest error with a gleeful kind of sadism (let’s be honest we love it); Deep Sky Derelicts is more forgiving, instead pushing you to do better, rather like a competent parent. My first challenging encounter in the game was against another group of survivors. Defeating them pushed me to the absolute limit as I was forced to use virtually every card in my arsenal. However, despite how punishingly difficult the encounter seemed, I realised that it was fair. Where in Darkest Dungeon the die always seems against you, Deep Sky Derelicts feels like it has removed that artificial difficulty weighting. It was possible to overcome that enemy party if I kept my cool and thought tactically. And I did.

Speaking of tactics, we’re not nearly done talking about the RPG mechanics of Deep Sky Derelicts. There is a levelling system, with an ability tree that unlocks two new abilities each level. Each ability has three levels of efficacy. So, it’s your choice whether you want a little bit of everything, or to plough everything you have into a few upgrades that suit your tactics. Within this simple-seeming framework, there is a surprising amount of customisation available.

For those of you more concerned with aesthetic customisation, fear not. It’s possible to completely customise your crew from portrait right down to name. There’s also a surprising range of dialogue options in the game, with encounters often leading to intriguing conversations. The choices in this game are real, if subtle. Whereas in many games these side encounters can often feel like lore-signposting or simply an opportunity for a merchant, many of the encounters in Deep Sky Derelicts seem genuinely organic. The characters you meet are survivors like you with their own stories and their own ends in mind, most of which are not clear from the offset. You can deal with them in many different ways. Want to play as the rogue in it for the reward? Or as the noble citizen looking to save the people? It’s possible to take these paths, though the developers possibly could have fleshed this out even more if they wanted to reach old-school levels of role-play.

Everything about Deep Sky Derelict seems to have been done right, from the synthwave soundtrack to the lore to the unusual combat system. It’s rare that a game with procedural elements holds my attention for long, and rarer still that an RPG can show me something new. Deep Sky Derelicts has managed to do both and pull it off with a certain ballsy panache. I can’t wait to discover what lies in the deepest depths of this game. And that evocation of child-awed wanderlust is a sign of its true success.