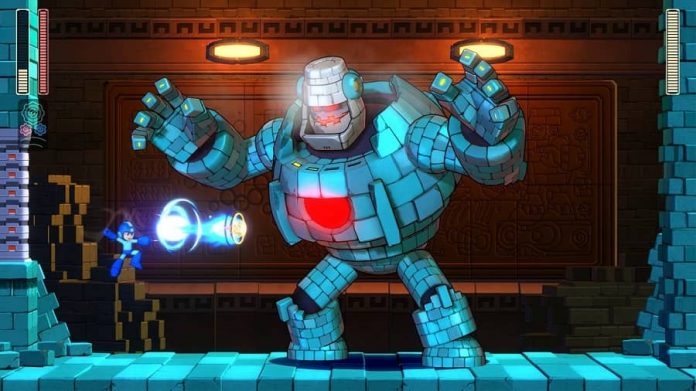 Over the course of 30 years, the Mega Man franchise has had its fair share of missteps but Mega Man 11 finally puts the Blue Bomber back on track.

It’s hard to imagine that just a few years ago, the mere idea of a new mainline Mega Man seemed far outside the realm of possibility. After the cancellation of Mega Man Legends 3 mid-development and longtime series producer Keiji Inafune’s departure soon after that, the franchise seemed to enter a state of limbo. Even worse is that when Inafune’s long-gestating spiritual successor Mighty No. 9 finally released, the game was met with a disappointing reception from fans and critics alike. There wasn’t much to look forward to if you were a Mega Man fan. And yet, here we are, in 2018 with a brand new mainline Mega Man game, Mega Man 11, and it’s freaking incredible.

Of course, Mega Man 11 finds itself in a difficult predicament. Having been so long since the last fully-fledged game in the series, which itself and its predecessor were merely 8-bit retro throwbacks, it’s been even longer since the last big step forward for the Blue Bomber. Not since Mega Man 8 on the PlayStation and the Sega Saturn have we seen the franchise’s mainline series of games move forward in any meaningful way. With so much time in between, if Mega Man 11 innovates too much, it may alienate longtime fans. But if it plays things too safe, it risks losing the attention of many critics. Much to my surprise, Mega Man 11 strikes the perfect balance, paying homage to its past while taking risks into the present. I couldn’t be more pleased.

From the outset, Mega Man 11 looks and feels just as a classic Mega Man game should, even though it’s been brought into 2.5D for the first time in the series. Everything from the Blue Bomber’s jump height to his slide-dash to his buster cannon feels just as I remember. The game offers plenty of challenge, even for veterans of the series, but it never feels cheap. Just like the other mainline Mega Man games, there’s a focus on platforming fundamentals that’ll have you working just as hard to jump over a pit of spikes as avoiding enemy projectiles. Most satisfying of all, however, is that when you do end up falling into that pit of spikes or get hit by those enemy projectiles, you’ll do so knowing that it wasn’t because of poor controls or an unfair encounter. It’ll be because you messed up, and you’ll be able to learn from it. 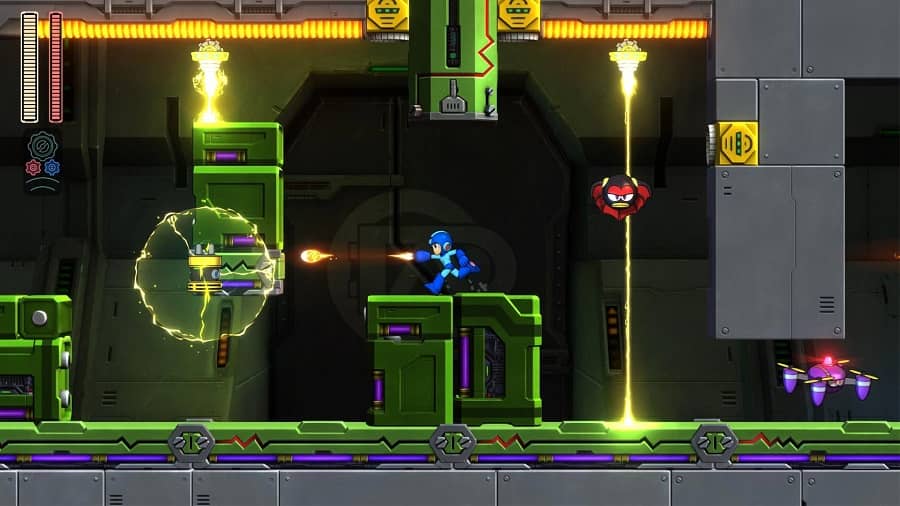 Though this has been true of all of the Mega Man games, in one way or another. What makes Mega Man 11 stand apart is its new Double Gear System, which is at the heart of its mechanics and story alike. Throughout its plot, Mega Man 11 eventually reveals the original sin in the division between Dr. Light and Dr. Wily. In a flashback to their youth, when the two scientists once worked side by side, the two develop opposing views of robotic freedom. Where Light views robots capable of free will, Wily sees them merely as tools for humanity to use. In this pursuit, Wily created the Double Gear System, which his colleagues find dangerous for its strain on the robotic body, thus shunning him from the robotic council. When Wily shows back up to cause trouble once again, Dr. Light begrudgingly equips Mega Man with the Double Gear System in hopes to use his technology against him.

In the game itself, the Double Gear System works like a pair of temporary buffs that you can use at will. If activated for too long, however, they’ll overheat and become unavailable until their meter cools down completely. The Power Gear ability is the more straightforward of the two, acting as a power-up to attacks you already use. Able to strengthen your buster cannon to blow off enemy shields as well as bolstering any of the weapons you gain throughout the game, it’s a handy tool that works best against bosses. The Speed Gear, which is the more useful of the two, slows time down to a crawl, letting you dodge enemy attacks or give you a few extra seconds to land that difficult to land jump. The Double Gear System is at its best whenever the design of a level works with the gear abilities themselves, giving you reasons to use them beyond just getting yourself out of a tight spot. 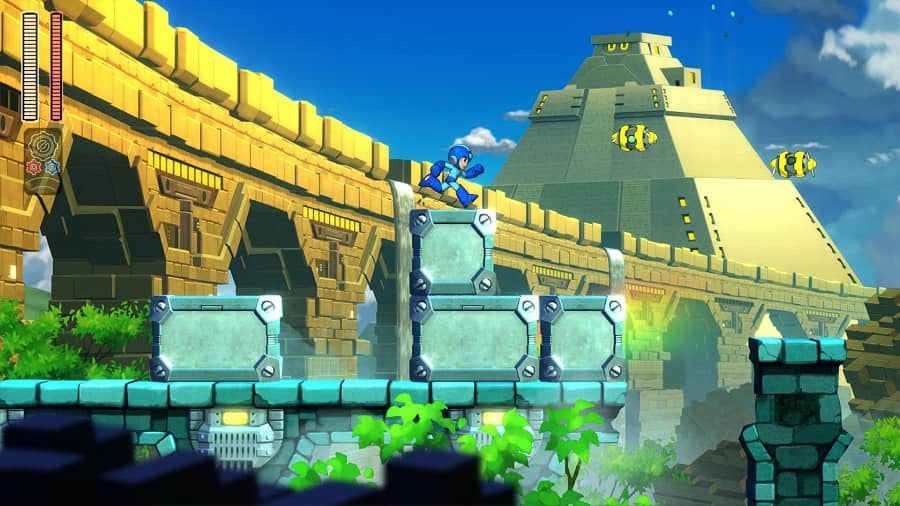 One versus eight hardly seems fair

Perhaps even more immediately striking than Mega Man 11’s gameplay, however, is its striking new art style. Helmed by series veteran Yuji Ishihara, who fans may recognise as the character designer for other Mega Man series, like Mega Man Legends and Mega Man Battle Network, Mega Man 11 is a blend of the series’ classic cutesy charm and Ishihara’s clean, simplistic designs. It’s an experimental visual style that I wasn’t sure would work as well as the classic designs of the past, but after playing with the game itself, I can’t help but appreciate Ishihara’s designs even more than those from the earlier games that inspired it.

Never is that more evident than in the eight robot masters of Mega Man 11 themselves. Like in every Mega Man game, each robot master has a central theme or gimmick that is reflected in their design and their corresponding stage. Block Man, for instance, is made out of blocks (apparently) and his stage is similarly surrounded by Latin American-like pyramids. Full of falling bricks and moving panels, Block Man’s stage is perhaps the most intricately designed of the bunch, often intertwining exciting opportunities for the Double Gear System along with more straightforward Mega Man-style platforming sections. Once you reach the final portion of the stage, where you fight Block Man himself, you’ll have to endure magically appearing blocks over your head as well as a mid-fight transformation that helps keep things feeling fresh.

That’s not to say every level is full of surprises, however. Some stages frontload most of their more inventive mechanics at the beginning, forcing the rest of the stage to merely regurgitate past puzzles in slightly skewed ways. Though, each weapon transformation you get makes it all worthwhile in the end. Whereas the familiar gameplay loop at the core of Mega Man makes its return where you use each robot master’s weapon against the others, methodically working through each stage as you chain one weakness to another, Mega Man 11 takes an extra step by making each weapon transformation even more exciting. No longer merely stealing enemy boss’s colour palettes, Mega Man now fully transforms his armour to match that of his fallen enemies. Each one, intricately designed in their own way, gives further life and character to the many creative robots already found within the game. 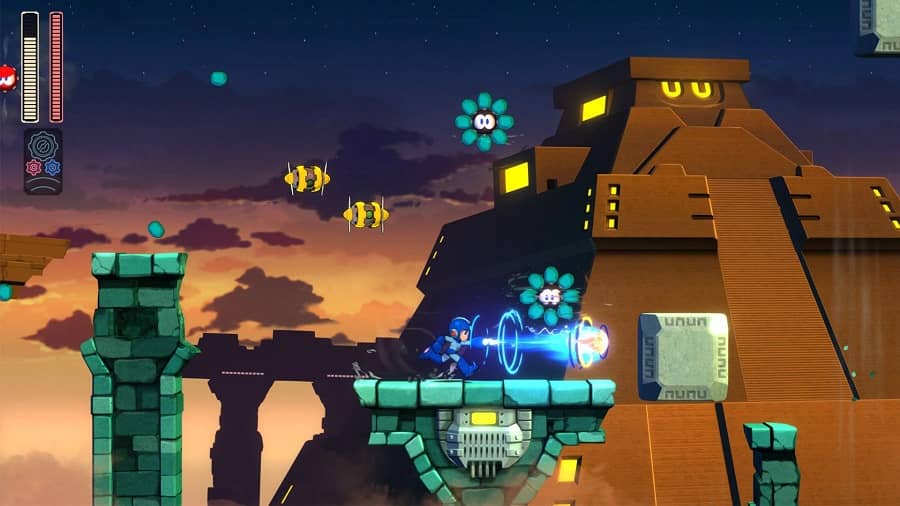 I’ve been a fan of the Mega Man franchise for nearly as long as I can remember. Growing up in the 90s, I fell in love with the Mega Man X series. A close friend and I had bonded over them for years and, after a year of adolescent pettiness between us, it was Mega Man Battle Network that helped repair our friendship. I can’t help but ascribe the series with a grand, personal weight it probably doesn’t deserve, but for the original series of games, they had always felt a bit out of my reach. I had never felt as at home with any of them like I had other games in the franchise. Whether it be my inability or lack of patience, I’m not sure. Yet, in Mega Man 11, that all changed.

Beyond how beautiful it looks or how smooth it feels, Mega Man 11 doesn’t want to scare you out of playing it. It is undoubtedly a challenging game, but there are many useful measures put in place to help alleviate these woes. For the first time in a mainline game, Mega Man 11 features a number of difficulty settings, ranging from Newcomer to Superhero. Its Double Gear System also gives you another tool to use while trying to work through each stage. Yet, perhaps most importantly of all, is that all these avenues are merely optional. Whether you’re looking for a punishing classic platformer experience, or you just want to play an expertly designed game without worry, both experiences can be found within Mega Man 11. And neither will judge you for the experience you prefer.

Mega Man 11 is one of the rare instances where I’m forced to ask myself, is this a perfect game? Unfortunately, the answer is no, but it’s still pretty damn close. The Power Gear ability, for instance, is rarely as useful as it’s Speed Gear counterpart. I barely used it at all, to be honest. There is also a disappointing lack of Protoman or Bass, two fan-favourite characters that we haven’t seen enough of in recent years. Yet really, none of that matters much in the end. In truth, it’s nothing short of a miracle that Mega Man 11 even exists, not even mentioning how good it is. Instead, I have to admit that even if it isn’t perfect, Mega Man 11 is everything I hoped it would be.

Mega Man 11 is available on PC, PS4 and Xbox One. We reviewed the PS4 version. 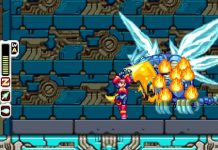