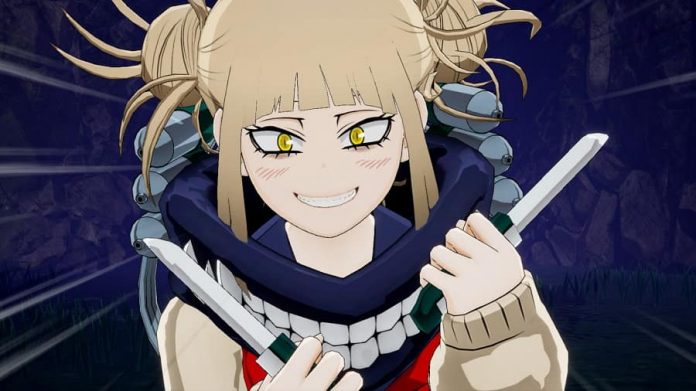 I consider there to be two types of fighting games: casual and competitive.

Competitive fighting games include the likes of Tekken and Street Fighter; games that anyone can play but have a great deal of depth and are carefully balanced. Those who take the time to master a competitive fighting game may even find themselves competing in events to win actual money. Casual fighting games, on the other hand, are more focused on shoving fancy displays in players’ faces and simply being outrageous. Nuanced fighting mechanics and balance are thrown out of the window in favour of simply providing fun. My Hero One’s Justice, a new fighting game based on the hit manga and anime My Hero Academia, is definitely a casual fighting game.

With its simple fighting system, absolutely anyone can pick up a controller and put up a good fight in My Hero One’s Justice. The normal attack button can be hammered to pull off solid combos that do a decent amount of damage, while two “quirk” buttons offer flashy special moves that are mostly ranged or affect a wide area. And, as with any anime fighting game, you have a dash button that allows you to quickly move in on your opponent. There are some more complex techniques to master, but even they’re basic. Devastating Plus Attacks simply require you to hold down the right shoulder button while pressing one of your quirk buttons, while pressing the normal attack button with the right shoulder button held results in an unblockable attack. You can also call upon the assistance of your two support characters by pressing the left and right triggers.

There’s nothing particularly wrong with My Hero One’s Justice brand of simple combat, but eventually, once the appeal of its flashy moves has worn off, it becomes a bit tiresome. While some depth is offered by counter moves that can be used to absorb a little damage before they land, and a parry system that leaves your opponent open to attack, the loose nature of the controls and the general chaos of battles means that they’re rarely that effectual. Also, the computer-controlled opponents that you face in the game’s myriad of single-player offerings can be pretty braindead at times, irritatingly running in circles or at walls like they’d rather escape than fight. 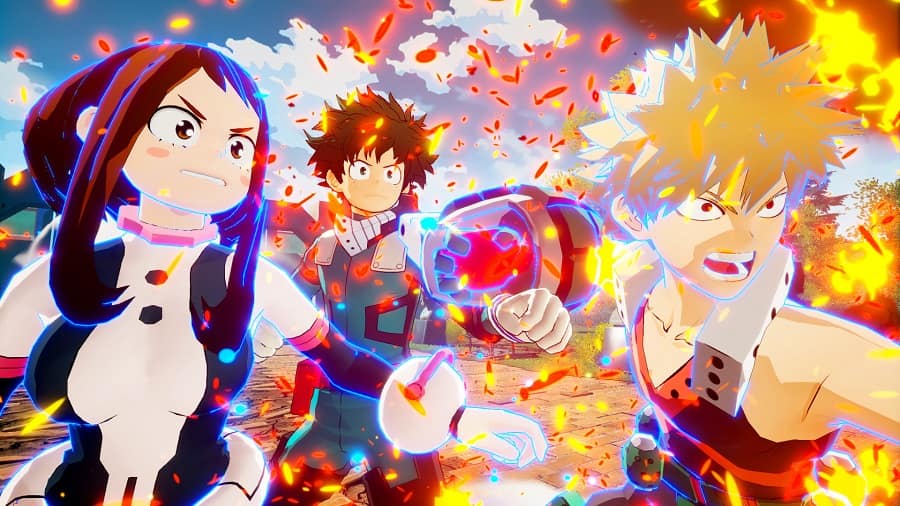 For any fan of My Hero Academia, however, My Hero One’s Justice certainly does have its merits. Its roster of fighters is one of them; 20 of My Hero Academia‘s unique heroes and villains are accounted for, and are wonderfully recreated for your pleasure. You can even customise their appearance with items unlocked by playing through the game’s story mode or purchased with coins. There are plenty of stages, too, which can be demolished to a surprising degree with your violent antics. It’s the game’s presentation that really impresses though. Navigating menus is like making your way through a comic book, and taking part in combat is like directing an anime. On Xbox One X, picture quality is superb, making every flamboyant special move that the characters pull off pop out of the screen.

Unfortunately though, My Hero One’s Justice‘s main attraction, its story mode, is a little dull. Its comic book style presentation fails to draw you into its story; partly because of its Japanese-only voice acting which necessitates you read subtitles rather than observe the action that’s taking place. Also, unless you’re familiar with the story of My Hero Academia, you might find yourself lost; it’s not particularly welcoming to newcomers. And finally, its battles are too straightforward to be exciting in the long-term. While you’ll probably make your way though it to unlock gallery and customisation items, you’re never going to be wowed. Eventually, you might even begin to skip its story scenes just to be done with it.

Ultimately, My Hero One’s Justice will entertain those who it’s made for, but it wont impress them. It’s yet another flashy anime-based fighter that sacrifices deep mechanics in pursuit of explosive battles, and while there’s nothing wrong with that, it limits the game’s long-term appeal. Also, thanks to its story mode being quite inaccessible to those who aren’t familiar with the series, it’s not even a good entry point for those wanting to take their first steps into its thoroughly entertaining world. It’s not a bad game by any means, but My Hero One’s Justice has very limited appeal.

My Hero One’s Justice is available on PS4, Xbox One, Switch and PC. We reviewed the Xbox One version.