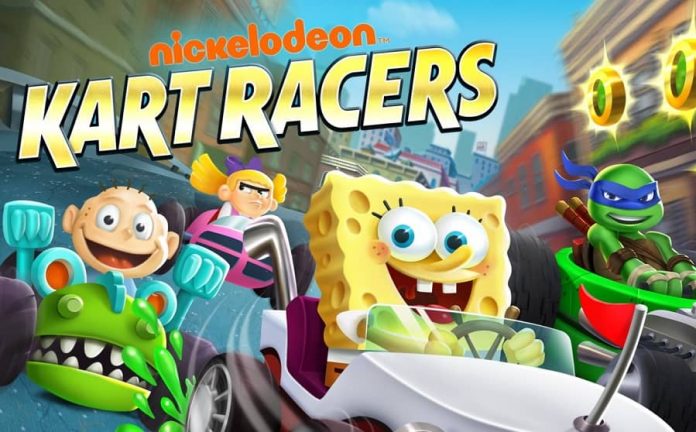 I never thought I’d see a karting game based on Nickelodeon brands in 2018, but here we are.

Nickelodeon Kart Racers is exactly what it says on the tin: a kart racing game that brings together characters from four Nickelodeon properties: Rugrats, Hey Arnold, Spongebob Squarepants and Teenage Mutant Ninja Turtles. It’s a bit of a mish-mash, with Rugrats dating back to the early 90s and the TMNT cartoon only starting in 2012. It’s hard to pinpoint exactly who this game is aimed at – current children, or grown-ups pining for simpler days? Regardless, it’s a lot of fun, even if it is very rough around the edges.

Let’s face it, any game that lets you take control of Reptar in a go-kart is going to be a winner. It’s a shame that more old-school Nick brands didn’t make it into the line-up; programmes like Rocko’s Modern Life, Aaahh!! Real Monsters, The Wild Thornberries and CatDog would have fitted well. With just four brands and 16 racers to choose from, it feels a bit barebones – who knows if there are any plans to bring more to the game via DLC at a later date, but it seems unlikely.

Nickelodeon Kart Racers‘ presentation leaves a lot to be desired, too. From its menus and music, I didn’t expect much. It screams low-budget, despite having those official licences. The characters have no voices, making them feel pretty lifeless – which, for recreations of some of the most beloved cartoon characters from our youth, is majorly disappointing. It feels so much like a wasted opportunity. Why can’t Angelica proclaim “you dumb babies!” when she’s overtaken by Tommy Pickles on the track? Or why can’t Helga say “move it, footballhead!” when Arnold gets in her way? These are four cartoons built on characterisation and charm, yet the game has captured none of that. 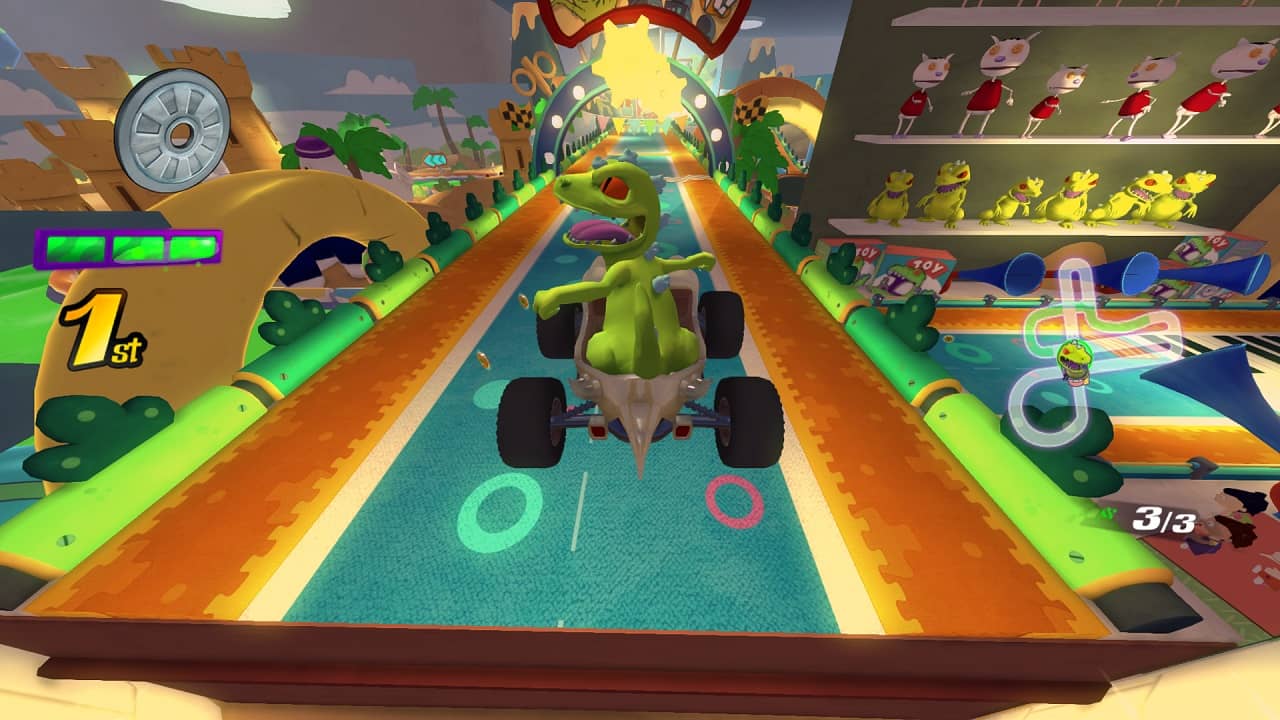 However, in spite of all of this, Nickelodeon Kart Racers still manages to be fun. Unless you’re playing Mario Kart on the Nintendo Switch, there aren’t many games available in the kart racing genre that are worth picking up on current generation. And while this certainly isn’t going to set the world on fire in the wider racing game genre, surprisingly enough, it manages to be one of the better kart racing games we’ve seen in recent years. On the track, the game looks surprisingly nice – at least, on Xbox One X it does – with environments varied and colourful. Each lap, certain elements of the track change, keeping the game varied and unpredictable. And, most crucially, it controls well and just feels good to play.

No matter who you decide to take control of, Nickelodeon Kart Racers always feels responsive and smooth. Karts handle well, drifting is as enjoyable as it should be, and – unusually for a karting game – you never feel at the mercy of your opponents. There’s a weapons system in place, so you can easily get knocked down a peg or two, but unlike other karting games, it’s rare you’ll find yourself going from first place to last in a matter of seconds, unless you truly mess up yourself. 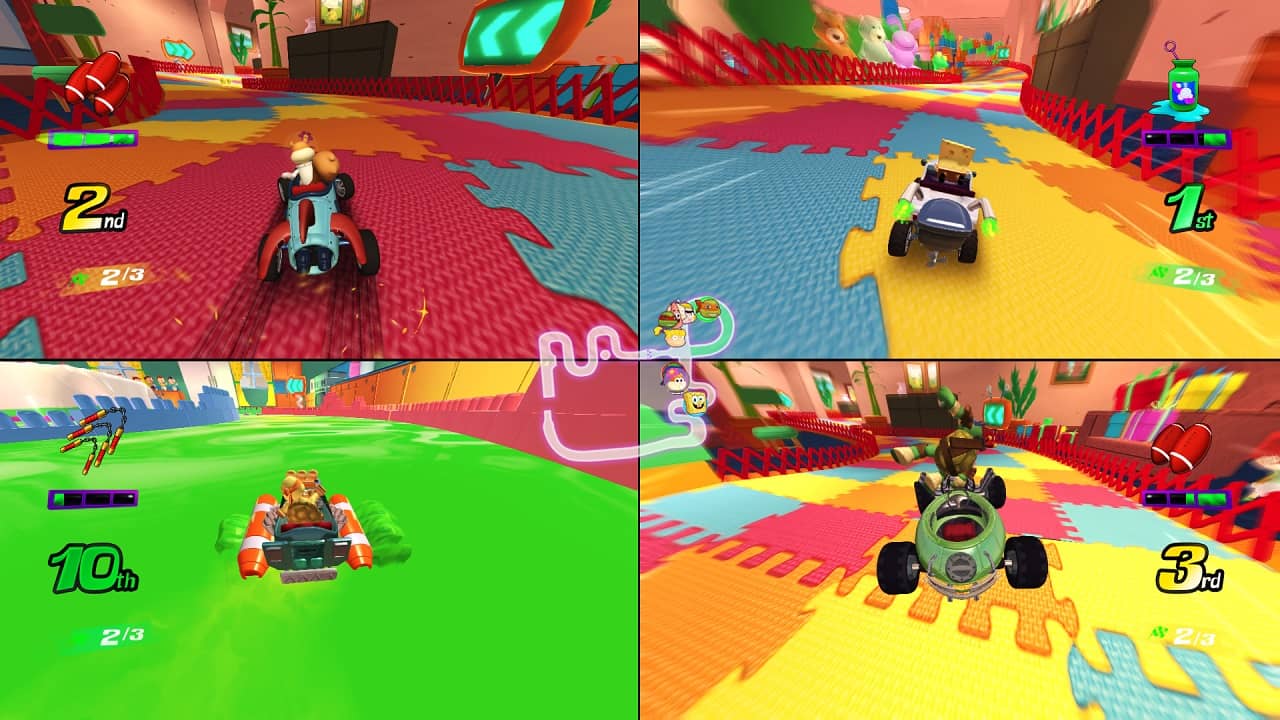 There are three difficulty modes to choose, and a number of different championships to play through, along with time trials and quick races. Of course, there are also local multiplayer options if you want to rival against your friends instead of the CPU, which makes for a fun diversion. Despite having a range of tracks – each featuring some air and water sections, too – playing through the game’s Grands Prix does get a little repetitive after a while. Jumping into split-screen races with friends on the couch certainly does help to keep things fun in the long run.

Having a modern-day video game with some of the most beloved cartoon characters from our youth is certainly a novelty, and at worst, that’s exactly what Nickelodeon Kart Racers manages to be. But at best, it’s a solid entry into a rather stagnant kart racing genre. It may be lacking a bit of personality and polish, but zooming around the track as Tommy Pickles or Patrick Star is a lot of fun. And, Mario Kart aside, it’s probably the best karting game we’ve seen so far this generation.

Nickelodeon Kart Racers is available on PS4, Xbox One and Nintendo Switch. We reviewed the Xbox One version. 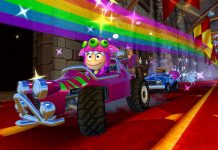